Have you heard that you can grab inspiration from art history, but you don’t really know how to apply it?

In this article, you’ll find a collection of famous portrait paintings and how you can use them to improve your photography.

You’ll also find a list of famous portrait photographers for you to look up and learn from their amazing work.

If you’re ready to get started, let’s take a walk down the art history path from famous portraits of the Italian Renaissance to the great artists of the 20th century. 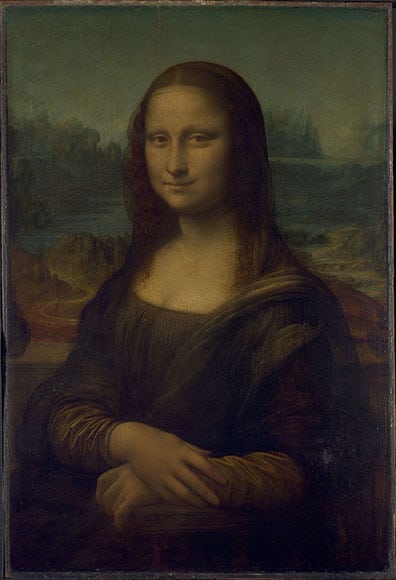 The Mona Lisa is one of the most famous portraits in art history – both the technical aspect and the subject have raised a lot of interest over the centuries.

Discussing every aspect would be an essay on its own, so I’ll just comment on a few of the most important elements for a portrait photographer.

Notice the composition in the oil painting – the Mona Lisa creates a triangle. The arms are the base giving her stability, and you can follow the arms as leading lines towards the head, which would be the top of the triangle.

The pose is still one of the popular ones in current days – three quarters towards the viewer with relaxed crossed arms.

Finally, look at how the light coming from the top left creates enough difference between lights and shadows to give depth to the image.

As far as the intriguing smile and gaze – I’ll leave that up to your skills to direct the model! Remember – imitating the most famous painting in the world is no easy feat, but you can still get some inspiration from Leonardo Da Vinci’s enigmatic young woman. 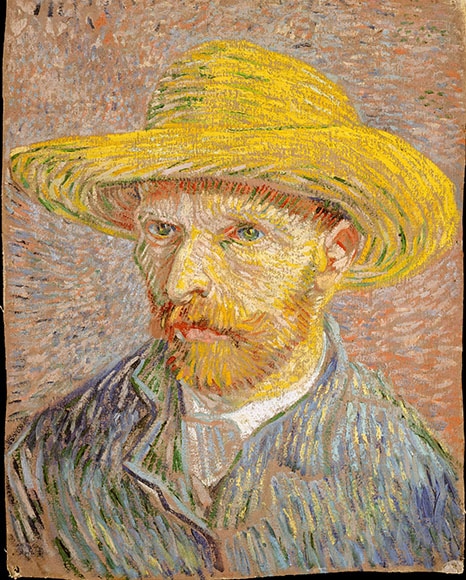 Vincent Van Gogh painted at least 35 self-portraits – he used himself to practice painting people, and many of them become the famous portraits we know today.

While doing self-portraits, Van Gogh wasn’t only mastering the technical aspect of portraiture – he was also using them as a tool for self-exploration.

As a photographer, you can do this too. Be your own model to learn how to light people, pose, and be comfortable in front of a camera. This will help you to improve your portrait technique and to connect with your models. 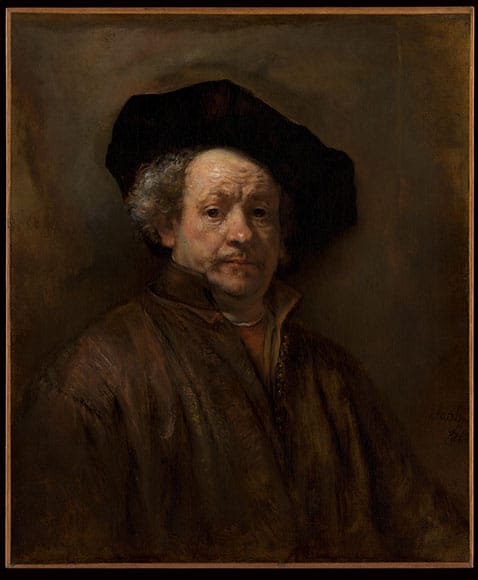 Rembrandt van Rijn is known for his famous portraits as the painter of light – it’s said that his color palette included only dark earth colors because the light should be the main subject.

In his pursuit of truth and realism, Rembrandt used light to highlight the texture and skin and reveal emotion through expression.

Photography literally means ‘drawing with light” – so what better ‘mentor’ can photographers have than Rembrandt?.

There’s a light setup in portrait photography called Rembrandt lighting – it’s characterized by a light triangle under the subject’s eye, just like Rembrandt’s portraits have.

This portrait painting is all the more amazing when you consider that Rembrandt was painting himself – definitely not an easy task, especially in the days before photos! 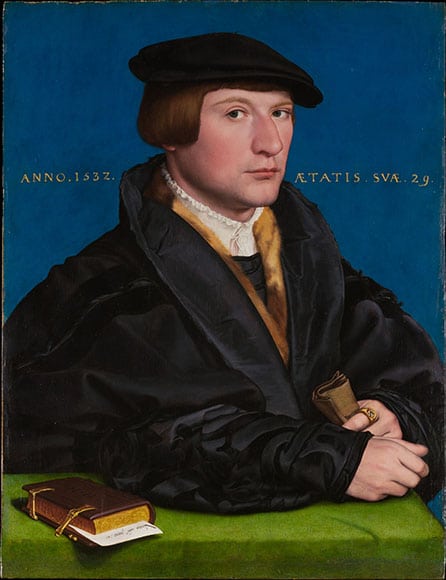 Hans Holbein – called the Younger to distinguish him from his painter father – drew his subjects before painting them. He used to sketch in silverpoint and color chalk. Then, he transferred the drawing into a panel to paint in tempera and oil.

In both techniques, he mastered color. As you can see in the portrait of Herman von Wedigh III shown above, he uses green in the foreground and blue in the background, which highlights the subject in black.

Blue is a primary color, and green is a secondary color – they are together in the color wheel, creating an analogous color scheme.

You can learn color theory and apply it not only in your portraits but in your photography in general. 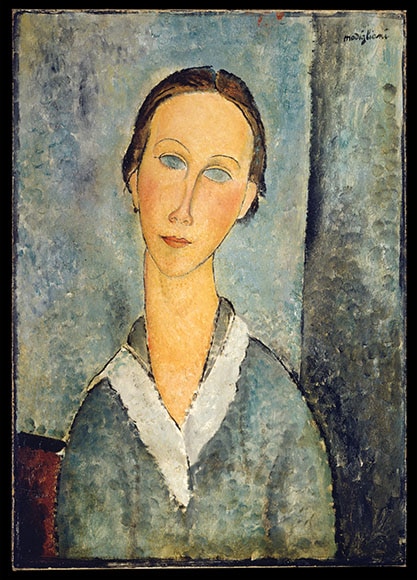 The long necks in Modigliani’s portraits are one of the most distinguishable trades in art history.

In part, he was detaching from figurative art, but he was also “questioning the fixity of identity” – according to Mason Klein, curator of the exhibition Modigliani Unmasked.

This portrait painting exploration is as current as ever with our omnipresence via online personas, the rejection of binary stereotypes and the multiplicity of online and offline profiles.

If you want to use your photography as a means to explore identity – you should definitely take a look at Modigliani’s work.

Also, one of the most famous photographers who work on this topic is Cindy Sherman, so check her out too. 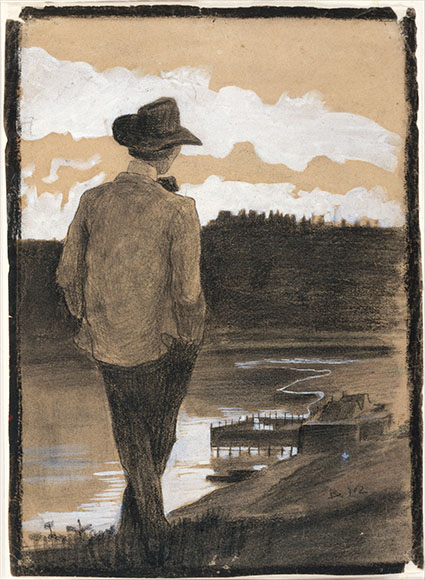 Umberto Boccioni is one of the most important artists of the futurism movement. Young Man on a Riverbank is one of his early works, which already shows his interest in the arrival of industrialization.

After seeing the subject in the foreground, the gaze is immediately drawn to the industrial background thanks to the leading lines in the composition.

You can already learn a lot from this portrait. However, if you want to dig into his development into futurism, you can later experiment with motion blur or multiple exposures to capture movement. 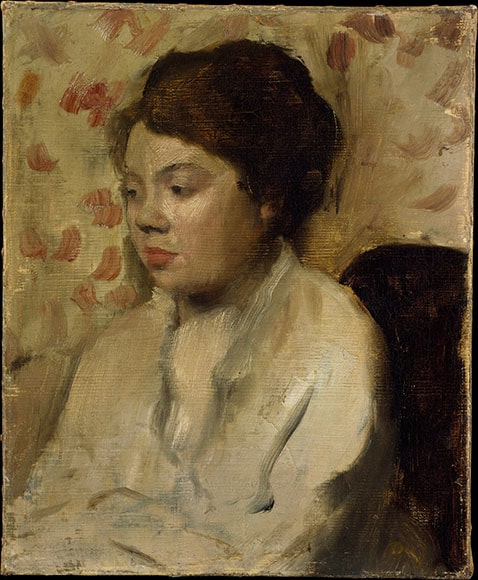 Impressionism and photography are tied together in art history. Thanks to the invention of photography, painters were released from the burden of capturing things ‘as they are’ and started depicting an ‘impression’ of how things looked to them.

This didn’t happen right away, of course. The official invention of photography was in 1839, although we have photographs dated at least from 1826 – and the impressionist movement peaked during the 1870s and 1880s.

Edgar Degas was a famous impressionist painter. His most famous paintings depict ballerinas – which he first captured in photographs.

His style was largely influenced by photography – according to the National Gallery of Art, you can see this because “the figures are cut off and positioned off-centre. Sightlines are high and oblique”.

Degas even used photography as an artistic means later in his career. You can see how painting and photography have enriched each other throughout time – all the famous portraits in this guide have influenced photos of our time.

8. The Milkmade, Johannes Vermeer (ca.1658 – estimation from the Rijksmuseum) 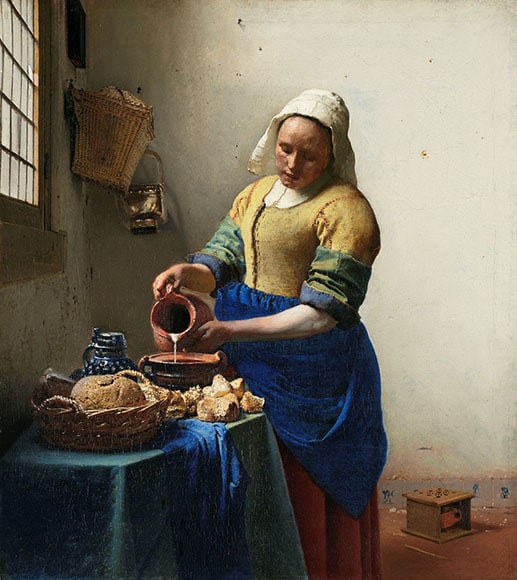 Johannes Vermeer is one of the masters of the Dutch Golden Age. Most of his paintings depict everyday scenes from the domestic life of ordinary people.

The Milkmaid, also known as The Kitchen Maid, is one of his most famous paintings. It had inspired many artists since the nineteenth century when Vermeer was rediscovered by art historians and gained the recognition he deserved.

If you like to do lifestyle photography, you can certainly learn much from the composition, lighting and poses from Vermeer’s selection of famous portraits. 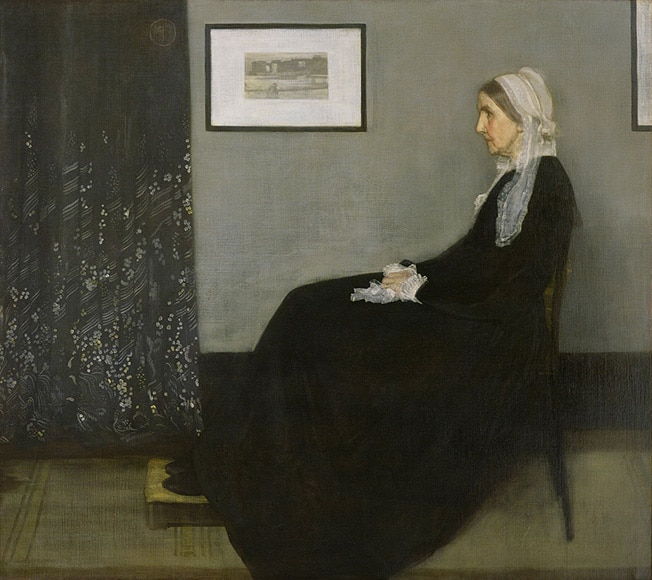 Not everybody knows this famous painting by its original title – it’s much more famous as Whistler’s Mother. This is unfortunate because focusing on the subject misses the whole point of the painting.

Whistler found similarities between painting and music, and that’s why he entitled many of his paintings as Harmony in this and that or Nocturnal in x and y.

In this case, it’s Arrangement in Grey and Black to prioritize the tonal value above other interpretations.

To understand more about tonal values in photography, you can study the works of Ansel Adams – even if he didn’t produce any famous portraits, his zone system for landscape photography is the base for all other types of photography. 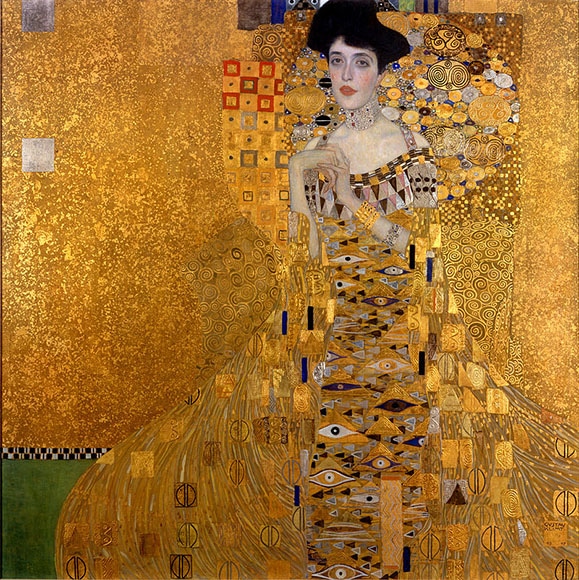 Gustav Klimt started by painting murals on public buildings by private commissions. Later, by 1900, he mainly painted portraits for the Jewish Viennese society – an up and coming group of industrials that turned out to be art lovers and his biggest supporters.

Klimt broke with tradition and co-founded the Vienna Secession – he established himself as the painter of beautiful women.

Adele Bloch Bauer is depicted in two portraits – however, he did hundreds of preparatory sketches for the paintings.

This one is the first portrait of the two, and it’s an oil painting covered in silver and gold leaf. He was influenced by Art Nouveau, the mosaics from the Byzantine art in Ravenna, and the Arts and Crafts movement.

His work is the perfect example of how transdisciplinary studies and multimedia techniques can create powerful results. 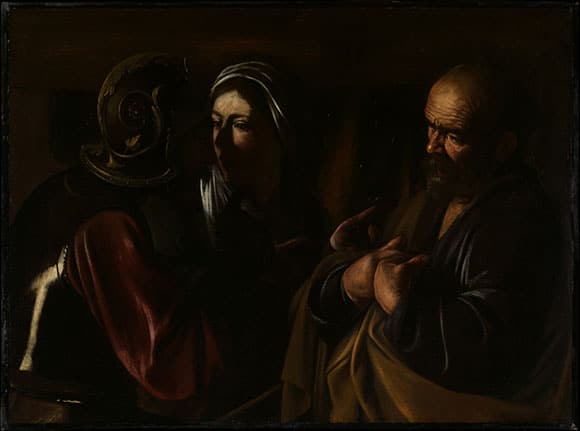 Michelangelo Merisi, known as Caravaggio, was an Italian artist and one of the most influential painters in art history.

His use of intense contrast of light and shadow, known as chiaroscuro, characterized his paintings and influenced western art from then on.

This technique adds depth to an otherwise bi-dimensional surface. That’s why it’s also been used in film and photography.

If you want to achieve this effect in your photographs, you need to use low key lighting. Aside from the technical aspect of tridimensionality, Caravaggio also used it to add drama to his scenes – which usually depicted religious scenes with realistic violence.

12. The Englishman (William Tom Warrener) at the Moulin Rouge, Toulouse-Lautrec (1892) 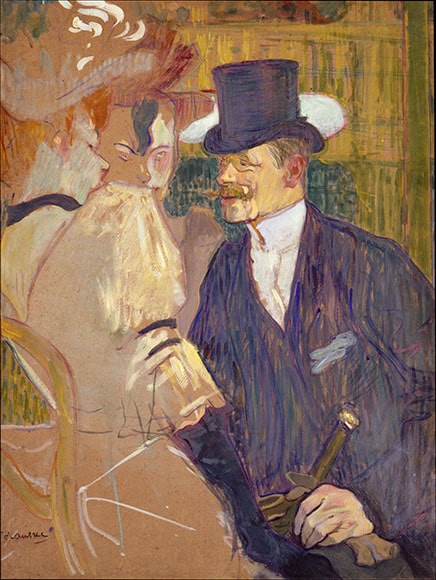 Henry Toulouse Lautrec focused his work on the bohemian culture and the nightlife of Paris – maybe because he rejected his own aristocratic lineage, maybe because he felt more comfortable amongst other ‘outsiders’ as he saw himself due to various illnesses and his alcoholism.

Whatever the reason, he “depicted the melancholy, humor and humanity beneath the glamour”, according to his biography in Sotheby – who sells many of his works.

If you’re interested in doing documentary portraiture or dance and performance photography, you should definitely take a look at his famous portraits and other work.

Who is the Most Famous Portrait Artist?

Who is the Most Famous Portrait Photographer?

Since the invention of the medium, photographers have been inspired by famous portrait paintings. I hope this selection sparks your creativity to make some amazing portrait photography.

Remember that many museums have granted a public domain license to their collections for you to use.

Also, projects like Google Arts and Cultures make museums and exhibitions available online. We have the world’s most amazing artworks on the tip of our fingers – let’s put this to good use!