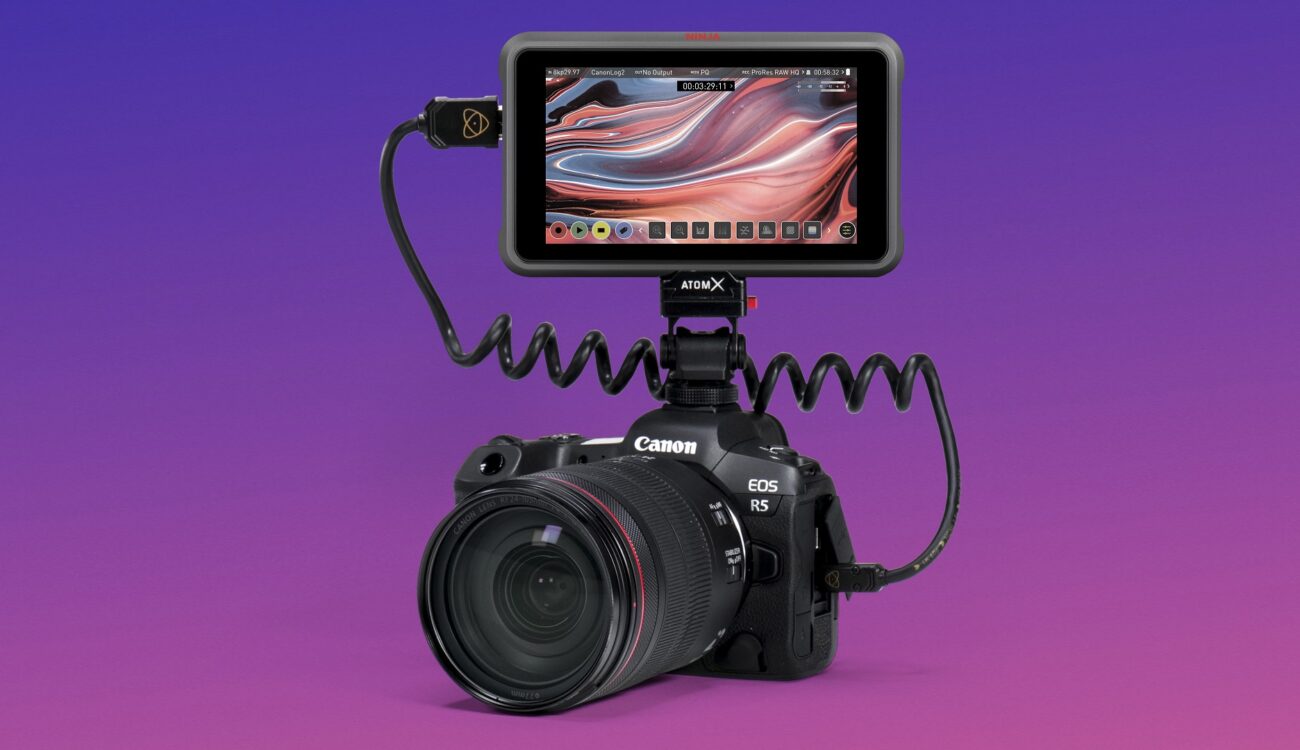 The ability to record 8K ProRes RAW in up to 30fps or 5K ProRes RAW in up to 60fps is now available with the Atomos Ninja V+ and the Canon EOS R5 full-frame mirrorless camera. When using this combo, there is no recording limit in 8K and it seems that overheating should also be less of an issue. The firmware updates for both the recorder and the camera are available for download free of charge.

Back in April 2021, Atomos first announced the new monitor/recorder Ninja V+. Using the same form factor and screen as the Ninja V, the new V+ promised to bring video recording over HDMI and SDI at up to 8K30 or 4K120 in ProRes, DNx, ProRes RAW, and newly also H.265. Today, Atomos announces that the 8K Apple ProRes RAW recording is finally available with the Canon EOS R5 camera. Let’s take a look at the details.

The firmware updates for both the recorder and the camera are now finally available, so when used together, this combo can record Apple ProRes RAW footage at the following resolutions:

Another advantage of using the Ninja V+ with the EOS R5 is that there is no recording limit (internal recording is limited to 29 minutes and 59 seconds). Ninja V+ will record in 8K indefinitely, but from Atomos testing, the NP-F battery in the recorder usually powers it for around 45 minutes which is also approximately how much material in 8K ProRes RAW fits on a 1TB SSD. Record Time Examples according to Atomos (in a 23°C / 73°F environment):

It is worth mentioning that the camera itself can already record 12-bit raw internally in 8K resolution (8192 x 4320) at 23.976p, 24.00p, 25p, and 29.97p with a bitrate of 2600 Mbps or in raw-light with a bitrate of 1300-1750 Mbps. The slight issue here, as we already know, is the overheating situation. It seems (and we hope) that when the camera does not record internally and only outputs the video signal to the recorder, the overheating should not be that much of a problem.

Atomos advises enabling the Canon EOS R5’s “standby: Low res.” option to avoid premature camera overheating and recording timeout. With the “Standby: Low res” mode enabled, the R5 will display a message that “HDMI output in standby may differ from the recording quality settings.” This message only applies to the standard video output modes and does not apply to the RAW output. Furthermore, disabling the camera’s “Auto power off” option in the Power saving menu will also prolong the recording.

In my opinion, it is a pity that the EOS R5 only has a Micro HDMI connector which tends to be a bit flimsy. If you plan on filming with this combo, I would definitely recommend getting some sort of HDMI port protector for the camera.

The good thing is that the Ninja V+ also records video signals from SDI via the extension module. That means the recorder can be used with SDI-equipped cameras such as the Sony FX6 or the EVA1, which makes for a neater combo than, say, a Shogun 7 on an FX6, which looks disproportionate on a small camera like that.

When it comes to ProRes RAW post-production, the format is fully supported in Final Cut Pro, Adobe Premiere Pro, and Avid Media Composer, along with a collection of other applications including ASSIMILATE SCRATCH, Colorfront, FilmLight Baselight, and Grass Valley Edius. Unfortunately, still no word about bringing the ProRes RAW native support for DaVinci Resolve.

Last but not least, Atomos is hosting an online event with the content creator Levi Allen on the 7th of September, where he will talk about his experience shooting 8K ProRes RAW with the Ninja V+ and the Canon EOS R5. You can sign up for the event here.

Do you use the Canon EOS R5 for your filmmaking work? How do you like the idea of shooting 8K ProRes RAW? Let us know in the comments section underneath the article.