Home » Blog » A Photo that Took a Decade of Trying: Sunrise at Angel Arch
Camera

A Photo that Took a Decade of Trying: Sunrise at Angel Arch 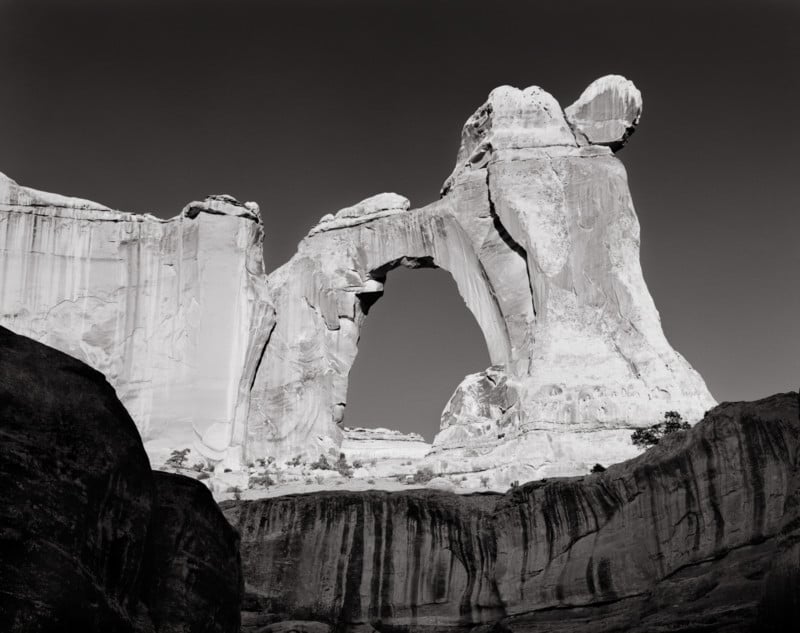 In 1991, near the end of some book projects that took me on some lengthy photographic journeys through the American West by car for two years, I came up with the idea of creating posters of some of my black and white images for a few of our western National Parks.

My idea was to provide park visitors with a choice instead of the commonplace color posters. Some of those color posters were excellent but I felt there was a large audience who appreciate black and white. My idea, which I pitched to some of my favourite parks, was to provide the visitors with a “fine art” visual interpretation in black and white.

My original attempts were met with great interest by the various Natural History Associations. Most were already familiar with my photography because of various photographic projects such as magazine articles, gallery/museum shows, or word-of-mouth. I had completed a color slide show for Capitol Reef National Park a few years before, and my black and white work was already known by some Natural History executives of Canyonlands and Death Valley National Parks.

In this four-part series written for the ELEMENTS Magazine, I am discussing most of these posters. I’ll give technical information where my memory serves me correctly, aesthetic considerations and some highlights of making the photographs on the scene. Please join me on this journey through the past!

This story is brought to you by ELEMENTS Magazine. ELEMENTS is the new monthly magazine dedicated to the finest landscape photography, insightful editorials and fluid, clean design. Use the PETAPIXEL10 code for a 10% discount off the annual subscription.

The first image considered for a poster was Sunrise, Angel Arch. There’s an interesting background to this image. The route to Angel Arch, in Utah’s Canyonlands National Park, was strictly four-wheel-drive for 20-some miles. Much of the road is deep sand, with the danger of quicksand in some spots. After rising well before sunrise, I left the “Jeepers camp” and drove the rougher one-mile spur road that led closer to the arch.

Although I photographed the unusual rock formation known as Molar Rock, placing Angel Arch in the background, there was a disturbing quality to the shapes, and I couldn’t compose an elegant image. My attention turned to Angel Arch, a magnificent stately masterpiece. I originally made an image of this subject in 1975 using 4×5 Tri-X film developed normally in Kodak HC-110. I visualized the image as a stark formal composition, so I used a #16 orange filter to darken the clear blue sky while keeping the warm sunlit arch bright. As I watched the sunlight slowly move down the face of the arch, I hoped that the foreground cliff below the arch would remain in a clearly defined shadow. It did, but only for a matter of seconds before the sunlight began to spill onto the shaded cliff. There was only time to make one exposure!

After returning home and developing the negative, I noticed some large dust spots in the sky. When printing, I deemed the dust spots too objectionable, breaking up what should be a smooth, dark sky. Also, the contrast of the negative was high, making it difficult to achieve subtle values in the sunlit arch. I resolved to reshoot the image.

Over the course of the next ten years, I made probably five trips to the arch, but the weather conditions never offered a clear blue sky at the right time after sunrise. On one of those trips, my assistant and friend Al Callju and I were caught in a frightening downpour at the end of the road. This rapidly turned into a flash flood, and we were forced to spend the evening inside my 1970 Bronco instead of returning to the Jeepers camp. It was a scary but exhilarating time, one of many which would permanently define my adventures as a photographer! The next morning, lingering cloud cover from the storm ended any chance of a clear blue sky.

Finally, in 1985 I was able to repeat the image, a full ten years after my 1975 negative. I shot two or three similar negatives but only one satisfied me in terms of the clearly defined shadowed cliff. Seconds made a difference, which is often the case. Fortunately, this new negative was better in terms of fewer, barely noticeable dust spots and more manageable contrast. I had just adopted HC-110 dilution E, which seemed to give a nicer tonal progression than dilution B (which I used for the 1975 negative) and allowed for a slightly longer development time.

My first press check for a poster of this image was dismal. The blacks were a dark grey and there was no intensity in the image. I clearly had a lot to learn about poster printing – the quality of the scan, sharpness in the scanning process, dot gain, using duotone inks, screen angles, paper selection, and the terminology used by the operators of the presses. I spent many sleepless nights obsessing about the details. It wasn’t until two or three printings later that I was somewhat satisfied with the poster quality, but every image seemed to produce a slightly new learning curve.

My response to this image is one of a theatrical stage performance. I view the arch as a brightly lit performer on a stage. The shadowed cliff needed detail to elevate an otherwise bland image into a more three-dimensional image with tactile shadow qualities. Much of this was accomplished in the original print by using a pin-registered shadow contrast increase mask to deepen the stripes in the shadowed cliff, a process I learned from Dr. Dennis McNutt in 1989.

The article is courtesy of ELEMENTS Magazine. ELEMENTS is the new monthly magazine dedicated to the finest landscape photography, insightful editorials, and fluid, clean design. Inside you will find exclusive and in-depth articles and imagery by the best landscape photographers in the world such as Freeman Patterson, Bruce Barnbaum, Rachael Talibart, Charles Cramer, Hans Strand, Erin Babnik, and Tony Hewitt, to name a few. Use the PETAPIXEL10 code for a 10% discount off the annual subscription.

About the author: Lynn Radeka’s professional photography career spans more than 50 years. Influenced in his early work by Ansel Adams and Wynn Bullock, both of whom critiqued his prints, he continues to pursue a technical and aesthetic mastery of the medium of photography. His love of the grand landscapes and intimate details of the American West was born on his first trip to Death Valley in 1966.

Lynn Radeka’s Black and White photography has been featured in eight National Park posters and is represented by several galleries throughout the United States and Europe. He also has the honor of being a featured photographer in the recent book publication “World’s Top Photographers: Landscape.” Lynn Radeka currently leads photography workshops in Death Valley, Utah and New Mexico with many more locations planned for the near future.

Interview: Oppo's Jeff Zhang on VOOC and the future of smartphone charging