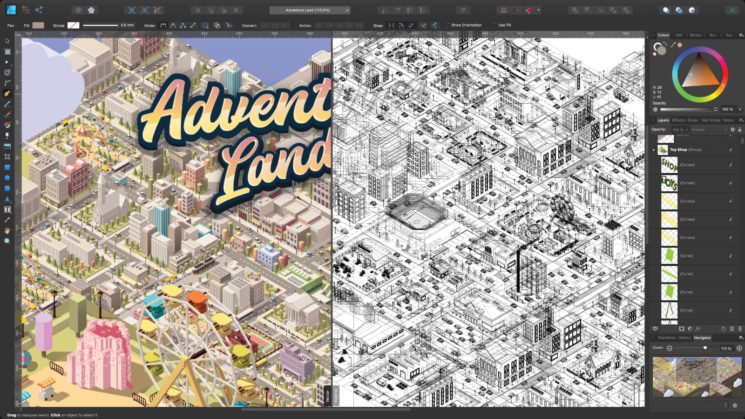 Serif has released version 1.10 of their Affinity products, including Affinity Photo, Designer and Publisher, all of which come with some pretty supercharged performance over the previous version. Rather than just focusing on adding new features, the new update focuses on getting the existing features working as quickly as possible for a smoother and more real-time experience.

This update represents a complete rewrite of the software’s memory management that allows the software to work much faster across all platforms including Intel and M1-based Macs, Windows and iPad. As well as speed improvements, Serif says the software can now also work with much larger documents, including ones with hundreds of thousands of layers.

A demo of the 1.10 beta (which has now been released) was posted to Affinity’s Vimeo channel, showing off some of the performance gains using a document with a couple of hundred thousand layers (yup, you read that right), and virtually no lag.

The update comes to all three Affinity applications, which includes Affinity Photo, Affinity Designer and Affinity Publisher. Serif says that visual performance is up to ten times faster than the previous 1.9 version, and judging from the video above, I can believe it. When you’re working with larger documents, especially ones with multiple layers for adjustments and retouching, that can make a big difference to your workflow speed.

We completely reimagined our memory-handling architecture and the result is that there’s really no limit to the size of document you can work on while maintaining that stunning performance.

The new updates are available to download free for existing users who own a license for Affinity products. If you haven’t tried the Affinity software yet, you can download a free trial on the Serif website. And if you want to buy Affinity Photo, the Mac and Windows versions are $49.99 and the iPad version is $19.99. That’s not per month. That’s total. There are no subscriptions to pay.

While Affinity Photo might not have completely usurped Photoshop as the photo editing software of choice for the majority, it’s certainly stepping up to the plate and getting a lot closer. It even offers a bunch of very useful features and workflows that Photoshop doesn’t have (that it should’ve had years ago).