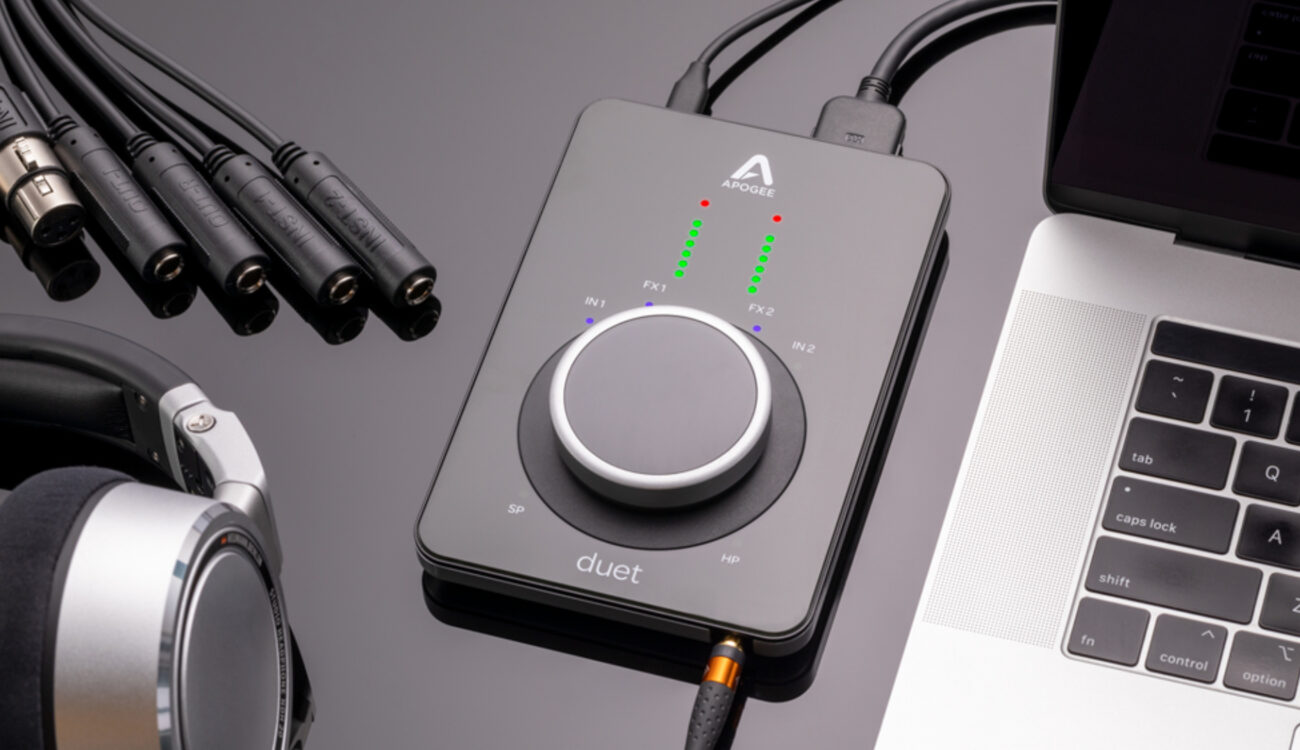 Long before the film and television world battled the harsh and brittle new world of digital cinematography capture, the audio world fought and won this same battle. Back then nerdy audio-enthusiasts came up with ways of making the important conversion from analog to digital as natural as possible. One of the protagonists in this transition was Apogee and now they just have released the third iteration of their popular digital audio interface, called Apogee Duet 3.

US-manufacturer Apogee have gone from making low-pass filters for $130,000 multi-track tape machines to more affordable audio interfaces to get your inputs into computers with the care that has been their watchword since 1985.

Their latest release is the Apogee Duet 3, the third iteration of their popular yet quite affordable digital audio interface for both amateur and professional users. It offers 2 inputs and 4 outputs via USB-C interface to the host computer.

In 2007, they launched their first portable interface called Duet to highlight the fact that music recording could no longer be done exclusively in large recording studios, but in the comfort of your own home as well. The Duet was an audio interface for Mac, Logic Pro, and GarageBand with a minimum of I/O but arguably the state of the art back then.

If the inputs and outputs were sparse so was the design; a large rotary knob floated on top of a slab of aluminum with a couple of perhaps too subtle option buttons. You felt creative and cool just owning one of these.

Fast forward 14 years and we have the Apogee Duet 3: still with a beautiful, this time glass-slabbed minimal design and I/Os – this still isn’t made for miking up whole drum kits. You get two inputs and four outputs with Apogee A/D conversion and preamps but also, unfortunately, with that unsightly break-out cable arrangement.

If you’re after a more streamlined setup, the new (and separately sold – $149) Apogee Duet Dock might be worth a closer look. It positions Duet 3 at the ideal angle for quick adjustments and visibility. The rear panel connectors on Duet Dock make it easier to organize and connect your cables to Duet too.

It has on-board hardware DSP for ultra-low latency with the optional virtual channel strip Symphony ECS plug-in. Apogee has brought along engineer, mixer, and producer Bob Clearmountain to ‘tune’ the channel strip. So plug in and instantly start sounding like Toto, The Rolling Stones, Bon Jovi, and Bruce Springsteen amongst many others.

The new Apogee Duet 3 USB audio interface can be fully controlled via the included Apogee Control 2 software, which provides easy access to all Duet functions and features, including Symphony ECS Channel Strip FX running on the Duet’s hardware DSP.

Other than the ECS strip, Duet 3 will gain you entry into the much lauded Apogee plug-in world, now available on rent–to–own basis (or more likely on a project–to–project basis). A quick visit to the plug-in site and you’ll start the gear–need frenzy with all that vintage aural pleasure and names you may have just heard of from “the good old days.”

Apogee’s Duet 3 is out in July for $599 (the ECS channel strip is only $49.50 when bought at the same time). And before you say that you can get a similar product on Amazon for $30 let me just remind you, that this product was 35 years in the making and you get what you pay for.

Guys, what do you think about Duet 3? Have you used the original Duet before? Let us know in the comment section below!

How To Take A Screenshot In Windows 11

MWC 2021: All highlights and news at a glance