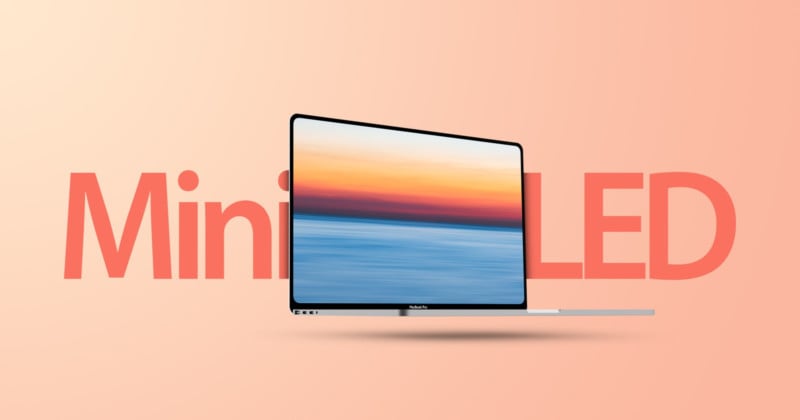 The impressive mini-LED technology that makes the new M1-powered iPad Pro’s display so dazzling looks like just the first of many to feature it. A new report alleges the company is investing $200 million to bring mini-LED displays to MacBook Pros.

In his review of the M1-powered iPad Pro, PetaPixel’s DL Cade wrote that the Liquid Retina XDR — Apple’s branding for mini-LED — “is a showstopper, with 10,000 miniLEDs arranged into 2,596 individually controlled local dimming zones. To put this in perspective, the 32-inch Pro Display XDR that costs $5,000 (without a stand) has a total of just 576 zones.”

In every other way, the iPad Pro’s display equals the Pro Display XDR. Color gamut is a full 100% coverage of Display P3, it can hit the same peak (1600 nits) and sustained (1000 nits) brightness as the Pro Display XDR, and thanks to local dimming, blacks are truly black. This performance is obvious the moment you watch or edit HDR content—the display is truly stunning.

In addition to maintaining incredible color accuracy, mini-LED technology lets displays simultaneously get incredibly bright, which makes for better HDR viewing experiences. The iPad Pro sustains about 1000 nits of brightness and peaks at 1600 nits. For comparison, typical monitors will often not exceed 400 to 600 nits.

Compared side-by-side with the previous iPad Pro model, the difference is night and day:

“There’s no denying it: this is the nicest display in the Apple ecosystem,” Cade wrote.

Experts never believed that incredible display would only ever exist on Apple’s high-end tablet line, and a new report by DigiTimes and spotted by MacRumors confirms as much. Apple is reportedly investing $200 million in additional surface mounted technology (SMT) equipment for four brand new mini-LED assembly lines that are expected to be leveraged for its upcoming MacBook Pros. The report alleges that the four new assembly lines would be able to output an additional 700,000 to 800,000 mini-LED MacBook Pro devices.

The new SMT machines are expected to be installed at TSMT’s manufacturing plants in China, a source told DigiTimes, and TSMT disclosed plans to expand capacity at its manufacturing complex in Dongguan, southern China.

Apple has reportedly been struggling to keep up with demand for the mini-LED panels for its iPad Pros, a market segment with likely less demand than flagship laptops would command. In addition to bolstering its own production lines, Apple is reportedly looking to add additional mini-LED suppliers ahead of the launch of its 14-inc and 16-inch MacBook Pros.

Boost your typing accuracy and speed with Lightkey Pro, just $50