Ashes of Creation is an upcoming MMORPG by game development company Inteprid Studios and is a game that players throughout the world are looking forward to playing. Having just entered Alpha stage, there are many fans who have been watching the progress of the game since its infancy back in 2017. It’s an exciting time to be an MMORPG fan, with Amazon’s entry into the genre with New World which recently launched a closed beta and will be launching worldwide at the beginning of September.

Intrepid Studios has developed an MMORPG that focuses on a unique MMO style, where players’ actions have permanent consequences within the game. They take the catchphrase ‘no risk, no reward’ to an entirely new level and we can expect extremely intense gameplay to follow.

When will Ashes of Creation be released? 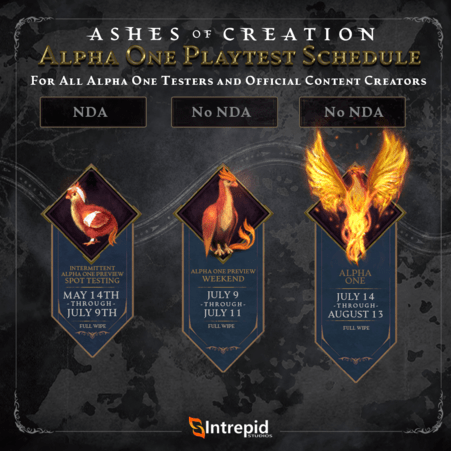 As of today, there is no set release date for Ashes of Creation. With Alpha testing having launched last month, we can expect the pace of development to quicken and Intrepid Studios have been very good at communicating each stage of development as well as the release schedule and open and closed tests.

With the game being in its fourth year of development, the team has worked tirelessly to develop an extremely well-built game with breathtaking scenery as you travel from one quest to another. As of right now, Ashes of Creation are in ‘Alpha One’ which started on the 14th July 2021 and will continue to 13th August 2021. There will be two additional phases of alpha testing following this, as well as two Beta rollouts before the game is fully released. You can register your interest in the game as well as being part of the Alpha and Beta testing right here.

If you do want to get access to Ashes of Creation before the full release date then you can purchase the Adventurer Preorder Package to secure access to the game. Be warned it is a sizeable investment, but does include several rate items plus access to each Alpha stage and Beta stage as well as 11 months of game time. You can click here to visit Ashes of Creation’s shop and see exactly what you receive for your hard-earned money.

For those who would rather not invest in the Adventurer Package, sit back, relax and chill out knowing that Intrepid Studios are working tirelessly on making a beautiful world for us all to explore at some point in the *hopefully* not so distant future.