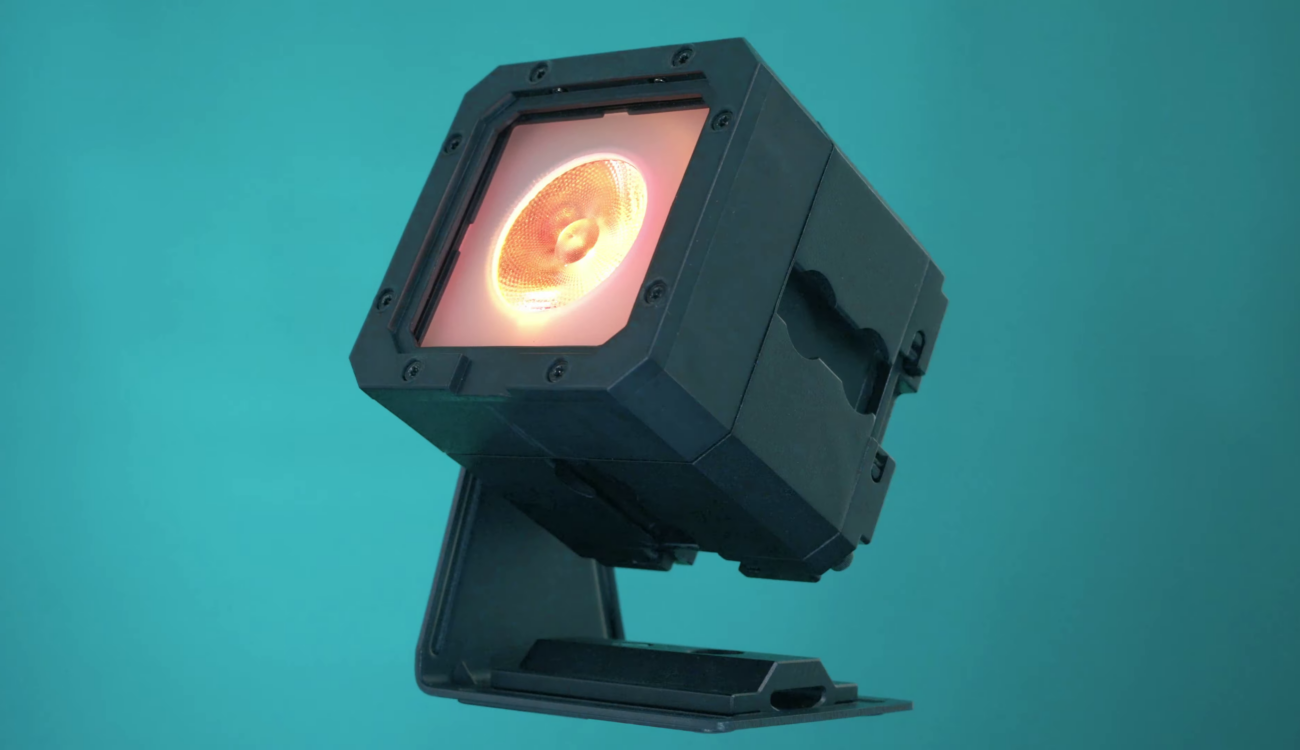 Astera, the german-based company behind the famous AX1 and Titan LED tubes, released a new product: the PixelBrick. Similar to its siblings it features RGB+Mint+Amber, a built-in battery, and a bunch of connectivity options.

The most obvious first: It’s only one pixel compared to the AX1’s 8 or the Titan’s 16. The company already produced other products like the AX3 Lightdrop which were more popular in event technology than in filming equipment, but the PixelBrick seems like an optimized unit with more functions.

PixelBrick uses the same LED Engine found in the Titan tube lights. So not only can you use it with the IR remote, Lumen Radio, and wired or wireless DMX (CRMX is built-in, wired only works over the optional PowerBox), but their AsteraApp is feature-rich and enables you to control multiple lights at once.

The wireless range is rated at 300 meters or 330 yards. With built-in Bluetooth, you can directly connect your smartphone with the light for control, which wasn’t the case with the AX1 tubes, which you had to connect to an AsteraBox which was then communicating with a mobile device. Additionally, you can use the PixelBrick instead of an AsteraBox and connect other lamps over UHF and control them as well, although Astera recommends using it only for short distances.

Of course, the light can be operated directly over the buttons and display found on the back. The unit weighs 1.12kg and is held inside an aluminum housing with an IP65 rating.

A lot of mounting possibilities and accessories

The beam angle is pretty focused at 13°, but Astera offers attachable light modifiers: A 30° Flood Filter, a 17° Beam Softener, and the BrickDome, which I could imagine could make this light look cool as an abstract practical light in the scene.

Additionally, there’s a bunch of optional mounting accessories you can get: BrickConnect (attaches two PixelBricks right next to each other), BrickHinge, and BrickTilt (places two PixelBricks at an angle with a Hinge or Tilt mechanism in between), and more. The lights are probably meant to be used in a cluster for lighting effects. The accessories get mounted to the AirlineTrack on one of four sides.

They also offer an accessory case and a charging case. The latter doesn’t charge wirelessly like the Aputure MC-4 Light Kit does, but uses a traditional 1.5mm jack to charge, much like the Titan tube cases.

PixelBricks also offer a few software features, two of them which I find interesting: Seamless Runtime enables you to put in the length of your shooting day. It calculates the maximum brightness so the lights don’t turn off mid-shoot. Scheduled StandBy is like a timer, you can set a time when your lights should wake up from standby, like after lunch break or before an event. These features aren’t new however, the Titan tubes offer them as well.

The Pixelbrick can’t be found in stock yet, and there’s no info about when it will be or how much it will cost. I suppose, however, due to the similar size and power to the AX3 LightDrop it could feature a similar price point of around 340€/380$.

Astera unlike Aputure is not purely focused on filmmaking, but covers event lighting as well, like with the AX5 triple PAR. But we know how popular the AX1 and Titan tubes have become for making music videos. I could imagine the PixelBricks could come in handy during video shoots, especially with the number of features, mounting possibilities, and portability.

Find more about the PixelBrick on their website: Astera

What do you think about the PixelBrick? Have you worked with other Astera lights before? Share your experience in the comments below!

Get 10% Off DXRacer Gaming Chairs With This DXRacer Coupon Code!