Battlefield 2042 unable to connect to EA servers – A Quick Fix 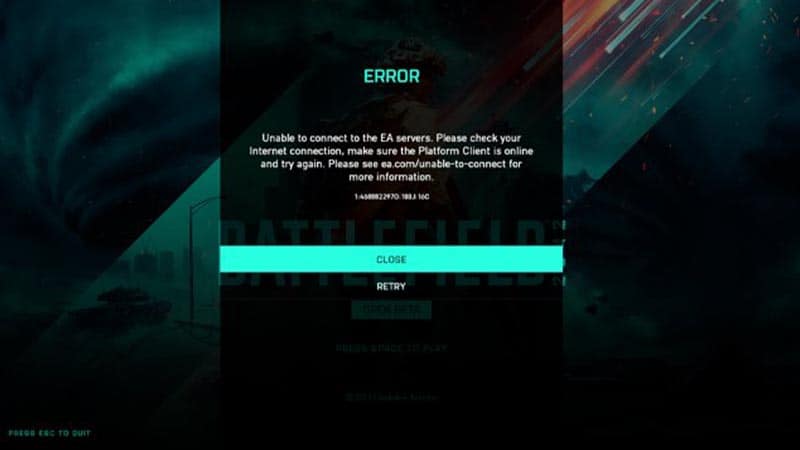 Let’s start by saying that betas are a good thing, they allow players to get a feel for the upcoming release and gives developers a chance to test the strain on their servers. However, what comes with betas? Errors, and the Battlefield 2042 beta has had its fair share.

This specific error is preventing players from gaining access to the online functionality of the game, essentially rendering the beta useless as it is an always-online title. Don’t fret though, there is a potential fix and we’ll go through that shortly.

How to fix Battlefield 2042 unable to connect to EA servers

If you’re looking for a quick fix for the Battlefield 2042 unable to connect to EA servers error, we should have you covered. It’s a short but effective one that some Origin users will have probably done once in their lifetime.

Ensure you’ve closed Battlefield 2042 then head to Task Manager. Once there, go to the processes tab and choose to End Task on the ‘EA,’ ‘EA Background Service,’ and ‘EADesktop’ processes. This allows for a complete restart on any EA clients thus hopefully restarting any networking the apps were doing. Once you reopen Battlefield 2042 and try to go online once more, the error should be gone.

The above fix has worked for the vast majority of users, however, if you’re still struggling, check your network connection or potentially do a full restart of your machine. If even this doesn’t help, it could potentially be an issue on EA/DICE’s end and there’s probably a fix being worked on behind the scenes. Just hold tight and you should get back into Battlefield 2042 soon enough.

Battlefield 2042 Beta not working with EA Play - A Quick Fix