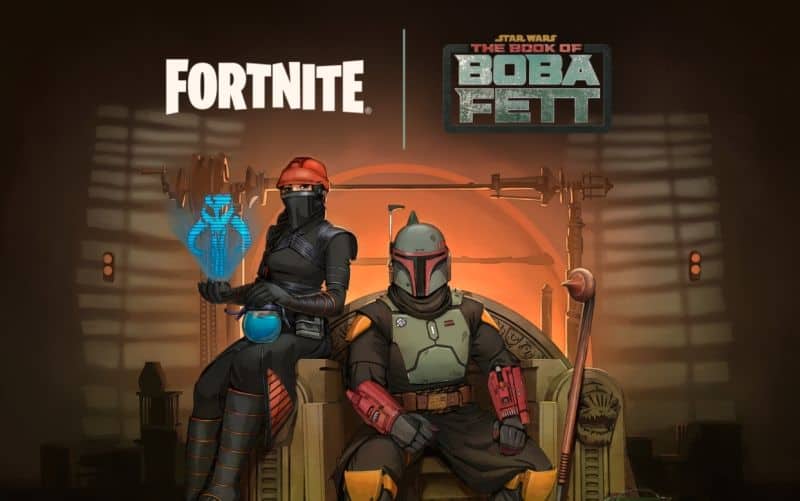 The character of Boba Fett occupies a part of every nerd’s heart, from his mysterious beginnings in the original Star Wars saga to his small amount of origin story in the prequel trilogy. He also has recently reappeared in The Mandalorian Netflix series, portrayed by New Zealand actor Temuera Morrison, who, confusingly also played Jango Fett in the prequels.

That’s not all, Boba Fett is also getting his own Netflix series, The Book of Boba Fett, which is set to premiere December 29, 2021, which leads us back to Fortnite as the addition of a Boba Fett skin is certainly a marketing tie-in, and not a bad one, not bad at all.

The iconic and fondly remembered star wars character will be hitting the island in the form of a skin this December. As announced by the official Fortnite Twitter account

He is seen confidently seated on a throne, illustrated in the adorably cartoonish style that Fortnite has become known for. His associate, Fennec Shand sits to his right. It’s not yet known whether or not the female bounty-hunting badass will be implemented alongside Boba Fett in Fortnite, but we can certainly hope, it would certainly add an additional must-have to Fortnite’s already impressive roster that currently sits at well past 1000 skins.

When is Boba Fett coming to Fortnite?

You can get your hands on the iconic bounty hunter on 12/24/2021 at 7pm ET/4pm PT. We don’t yet know how the skin will be unlocked or whether it’ll only be available for those who wish to spend the V-bucks. It could be a very similar story to the addition of the Mandalorian all the way back in season 5 wherein he was part of the corresponding battle pass. However, his armor set was only attainable via the completion of a not-insignificant number of quests. It would be nice to see some similar, skill-based bonuses with Boba Fett, and hopefully Fennec Shand too.

$10,000 Gucci Xbox Series X announced - Here's what you get for your money

How to Make the Perfect Prime Rib Roast