Cherry MX Blue Vs Red Switches: Which Are Best For Gaming?


The mechanical switch has been around for a very long time with keyboards, offering users a highly responsive, durable option that can last a lot longer than the membrane alternative. One of the most notable mechanical switch manufacturers is Cherry MX, a brand that the majority of gaming keyboard owners will have heard of.

Cherry MX has many different switch variants in their repertoire, with different features that cater to everyone’s specific requirements. Two of the most popular switches from Cherry MX are the Blue and Red variants, with both differing in operating force, travel distance, and noise. To see which is best, we are going to pit the Cherry MX Blue Vs Red, to help you decide what to get with your next keyboard.

What’s The Difference Between Mechanical And Membrane Switches?

A switch is a mechanism beneath your keycaps that responds to a keystroke (the inner components make contact) which then sends that information to your computer. 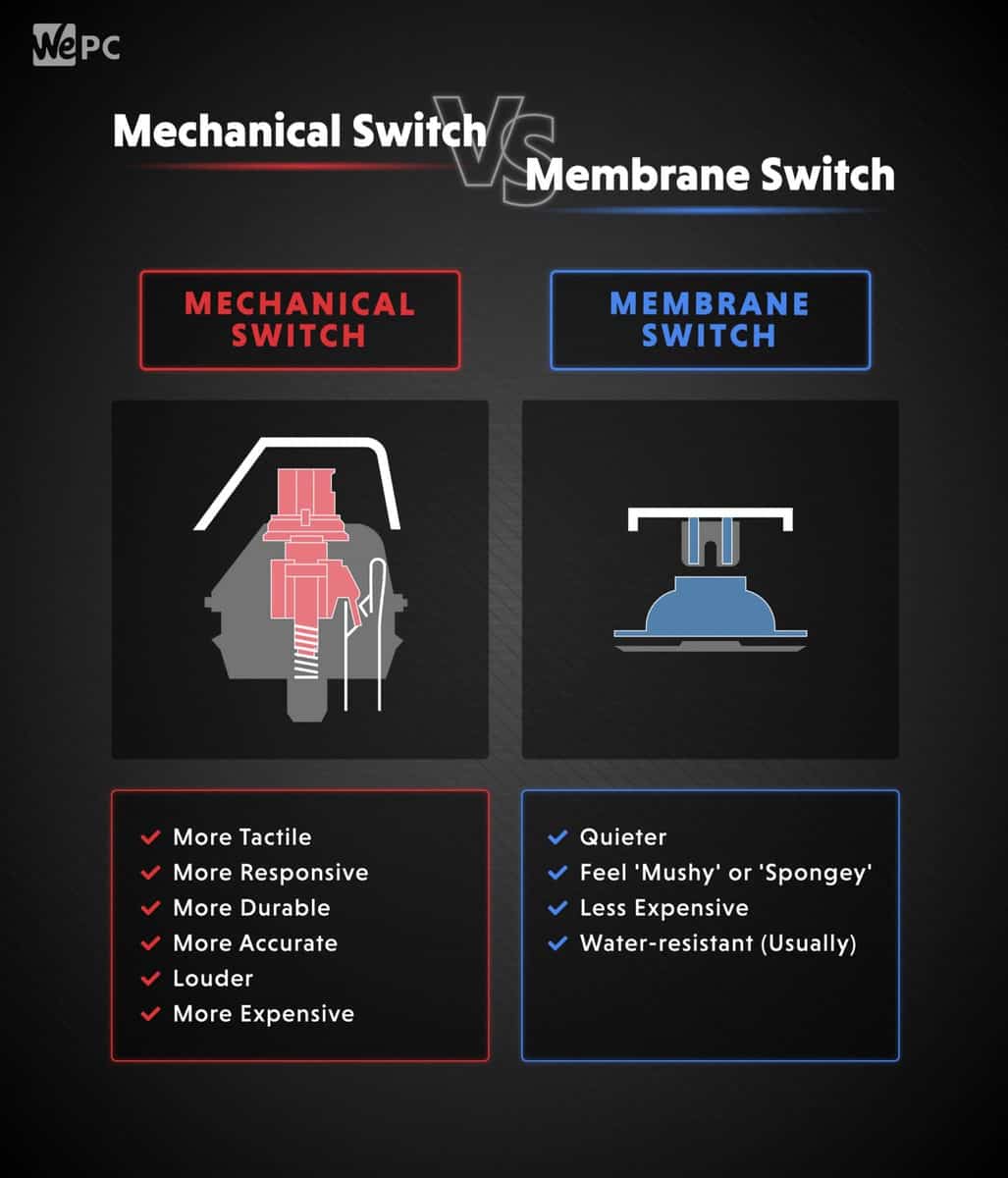 Cher MX Blue and red do share some similarities, such as design and inner components but in the grand scheme of things they are different in almost every way. As mentioned, the Blue and Red Cherry MX switches are two of the most popular on the market with both differing in operating force, travel distance, and noise.

The Cherry MX Red switch is one of the most well-known mechanical switches available today. The Red variant features a low actuation force, linear style, and quieter operation, traditionally making them popular among gamers.

Cherry MX Blue is one of the brand’s most popular tactile variants with audible switching characteristics, often being described as ‘clicky’. The Blue switch is one of many tactile variants from Cherry MX, with a higher actuation force than the Red. The audible click comes from a click jacket on the stem of the switch, which snaps back once pressed down halfway through the keystroke, producing the noise. The clicky noise is very satisfying but quite loud, so these should probably be avoided in an office environment.

Cherry MX Blue Vs Red: Which Is Best?

These two switch variants are very different in almost every way, with the most obvious being the tactile nature and audible click of the Blue. Like all switches, there is no real answer as to what is best but the Cherry MX Red makes the most sense for gaming, with its more responsive, linear style. I doubt you would notice the difference in-game with these two switches, however, the Red variant has a lower operating force of 45 cN compared to the Blue’s 60, and the Red features 0.2mm less pre-travel distance.

Clicky switches, like the Cherry MX Blue, provide a tactile bump during the keypress and also produce a noise during the process. These require a slightly greater actuation force of 60 cN and have a longer pre-travel of 2.2mm, with the same 4mm total travel.

With the shorter travel time and less force needed, I would recommend picking up the Red variant for gaming but at the end of the day, this is all down to personal preference. The clicky MX Blue switches are oddly satisfying to use thanks to that tactile bump, as long as you can handle the noise. Reds are much quieter, however, they still produce a noise when the keypress bottoms out.

Cherry MX Blue Vs Red, which is it? Well, If you love the idea of a tactile switch that produces a satisfying, albeit loud, clicky noise, you’ll love the Cherry MX Blues. My preference is for the Cherry MX Reds though, with a smooth linear style, technically more responsive, and quieter on the ears.