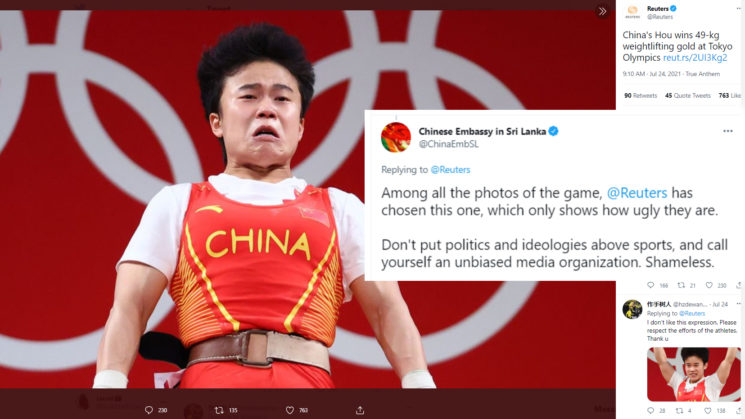 Reuters recently published the news about Chinese Olympic weightlifter Zhihui Hou who won the gold medal for her country. But rather than celebrating her victory, China was quick to publicly call out Reuters for using an “ugly” photo of Hou in the article.

24-year-old Hou won the gold medal in women’s 49-kg weightlifting at the Tokyo Olympics on 24 July. Reuters reported about it and used a photo that shows her with a strained facial expression. You know, the kind you pretty often see in photos of weightlifters in action. After Reuters tweeted the article, the Chinese Embassy in Sri Lanka was quick to respond:

“Among all the photos of the game, @Reuters has chosen this one, which only shows how ugly they are.

Don’t put politics and ideologies above sports, and call yourself an unbiased media organization. Shameless.

Respect the spirit of #Olympics”

Are you going to issue an apology first to Hou Zhihui then to Reuters? pic.twitter.com/W57oot0HVZ

What’s really fun is that China Daily chose the same photo for its article, as one of Twitter users pointed out. However, they quietly changed it for a more flattering one. Surprise, surprise.

Some netizens complain that Reuters’ choice of photo is racist because the weights have been cropped and the photo seems to be totally out of context. However, you can see the weights in the original image.

Most people didn’t think that there’s anything “ugly” about this photo though. “I rather think it shows how much effort it takes to lift such a weight,” Kashif Naqvi writes. “It’s not Ugly at all. It beautifully demonstrates the effort she and all other athletes put in their craft. What is UGLY here is your overreacting.”

A champion poured her life into winning gold for the country and you called her ugly.

I think you are so biased about looks, you ought to be ashamed of yourselves.

It’s only ugly to you. I see an athlete in the middle of her effort on her way to bag an Olympic medal.
This tweet says more about you than anything.

I think its a well captured photograph, which shows nothing good in life comes easy. Its upto the person viewing the picture to interpret it, but most will appreciate this. Its quite sad that the embassy finds this “ugly.” If it was a beauty pageant then its a different matter.

This is such a bizarre, misogynistic reaction to a young Chinese woman photographed in her moment of glory. She’s not there to smile daintily, she’s there to lift more than twice her body weight and she smashed it. Show some respect.

I’m still trying to find what’s ugly about this. It’s the face of a winner right in the middle of her win!
Looks beautiful to me 🙌🏽

Some sports photographers also noted that this is the moment they’d capture and that they appreciate when shooting sports. And indeed, I see this as the moment of determination and strength; the moment of triumph. I also see nothing ugly here. Hou wasn’t there to smile and pose for a headshot, she was there to lift weights and take a medal – and she kicked ass! And all you can see is “how ugly she looks,” I’d say that your mind is ugly. But that’s just my two cents.

Here they are: Our top 5 Android and iOS apps of the week