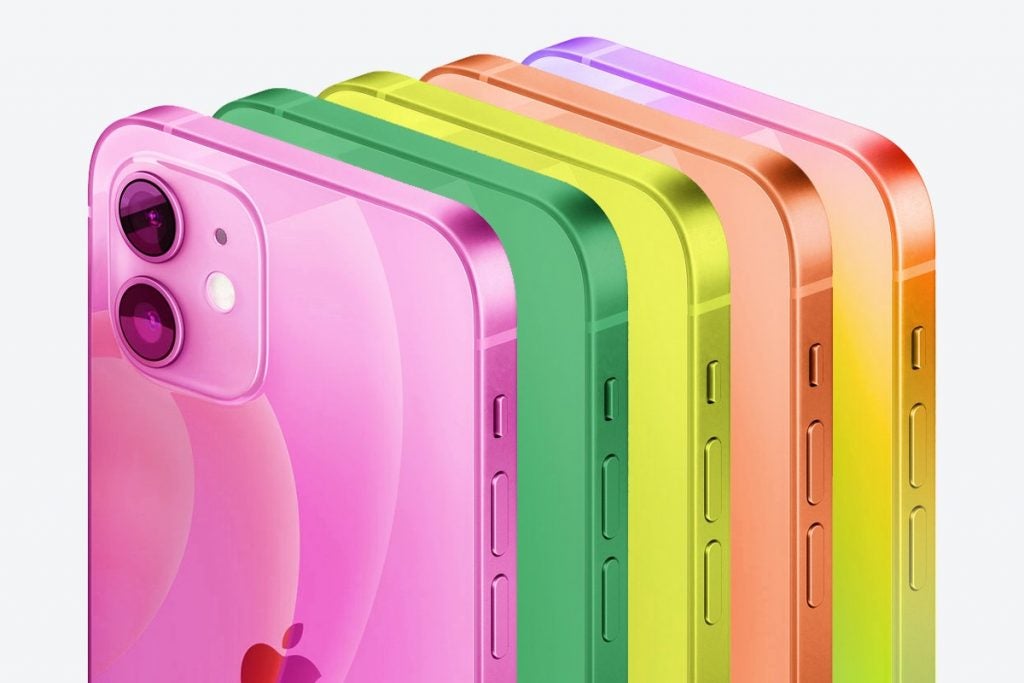 Apple launched its iPhone 12 range last October and time has seemingly flown by. We’re now just a number of months away from the probable iPhone 13 announcement and we’ve already heard plenty of rumours about the upcoming flagship.

Apple delivered improvements across the board with the iPhone 12. Consisting of the iPhone 12, iPhone 12 Pro, iPhone 12 Pro Max and the all-new iPhone Mini, the 2020 line up offered a more Pro-level experience in its base model and a smaller option for those looking for an actually pocket-sized phone in the Mini.

While we still have a few months to go until the highly-anticipated launch of the iPhone 13, we’re already seeing a good amount of leaks giving us plenty to speculate about the iPhone 13 (or iPhone 12s?). The latest rumours include new display tech, bigger batteries and the return of TouchID.

Below you’ll find everything we know about the iPhone 13 so far, including when it could arrive, what it might look like and what specs it’ll pack. Don’t forget to bookmark this page too as we plan to update it regularly.

Release date – when will the phone launch?

The iPhone 13 is expected to launch toward the end of 2021, in either September or October.

Traditionally, we’d expect Apple to unveil its flagship in September. However, after the pandemic delayed last year’s iPhone 12 to October 13, it’s unclear whether Apple will return to its usual schedule for 2021.

Wedbush analyst Dan Ives (via Barrons) predicts we’ll see an announcement take place on the third week of September. While Ives didn’t give an exact date, Tech Radar did the maths and calculated that, based on Apple’s trend of holding launch events on Tuesdays, we could see the launch take place on September 14, followed by pre-orders opening on September 17 and the device officially shipping out on September 24.

Specs and features – a 120Hz display, the return of TouchID and an always-on display

As far as the display itself goes, Jon Prosser of Front Page Tech believes the iPhone 13 will definitely be getting LTPO displays, allowing Apple to include a 120Hz refresh rate on its ProMotion screen. Apple currently uses LTPO tech to allow its Apple Watch 6 to show an always-on display and we’ve seen it used on some newer best Android phones, like the OnePlus 9 Pro and Samsung Galaxy S21 Ultra.

This was backed up by the influential analyst Ming-Chi Kuo, who asserts both technologies will be coming to some versions of the iPhone 13.

Further evidence for the switch to LTPO comes from a DigiTimes report, which reports both Samsung and LG Display are converting parts of their production into making LTPO displays for Apple. The report (via MacRumors) also states these displays are more efficient, with 15-20% less power required.

Leaker Max Weinbach (via YouTube channel EverythingApplePro) also believes we could see an always-on display this year. Weinbach says the clock and battery icons will be visible on the display even when it’s off. You could also see your incoming notifications this way, with the whole display no longer needing to light up.

Apple could also be revamping its sign in features, with rumours of a return to TouchID alongside the iPhone’s existing Face ID capabilities. On March 12 Barclays analyst Andrew Gardiner added his voice to the choir expecting this to arrive on the iPhone 13.

In a note to investors (via MacRumors), he wrote: “We also view the adoption of fingerprint-under-glass, that likely is added in the 2H21 iPhones, as a structural headwind for additional 3D sensing content at Apple and could be the security feature of the future.”

The under-display fingerprint tech, which has also been reported by the Wall Street Journal, would be especially handy right now as it would give users wearing masks an alternative fast option to sign into their phones and use features like Apple Pay in shops.

Apple is already testing a feature to combat this common issue – and you can try it out right now – but you’ll also need an Apple Watch to use it, so we’re looking forward to the company possibly providing an option that doesn’t require an extra piece of tech.

Don’t get your hopes too high, though. Ming-Chi Kuo has since suggested we may not see under-display TouchID make an appearance on the iPhone until 2022 (via MacRumors).

Kuo (via Apple Insider) has also suggested that Apple is “aggressively” testing a vapor chamber thermal system to be used in the iPhone, allowing Apple to handle higher thermal loads caused by the adoption of 5G and increased CPU performance. However, as of March 1 2021, Kuo somewhat backed away from those predictions.

Kuo (via MacRumors) also believes the iPhone 13 range will arrive with a larger battery pack, made possible by some space-saving efficiency inside the phone. That’ll include integrating the e-SIM into the logic board and trimming the Face ID components, Kuo says.

Both Digitimes (via Forbes) and MacOtakara have suggested that the next iPhone will work to reduce the size of its somewhat dated notch, with the latter also reporting that the phone will be 0.26mm thicker.

More recently, Twitter tipster @MauriGHD shared the above tweet seemingly confirming that Apple has created an entirely notch-less prototype at the expense of larger bezels. However, the leaker also indicated that Apple may not make the leap to fully notch-less until the iPhone 14 in 2022, so we won’t get our hopes up just yet.

The chances we may get a smaller notch seemed to rise in early March thanks to a research note from Ming-Chi Kuo. That would be welcomed, especially if Apple launches an iPhone 13 mini, as the notch on the smaller iPhone 12 handset is particularly abundant.

Research firm TrendForce has also reported that the next iPhone will see a smaller notch. However, the firm also suggested that this will be one of the biggest changes we’ll see, with the four new models operating as more of an “extension” to the iPhone 12 series. TrendForce even reported that the phone may be named the “iPhone 12s” series rather than the iPhone 13, implying a smaller update than we’ve seen in recent years.

Battery – help is on the way!

Apple plans to fit the iPhone 13 with much larger batteries, according to many recent rumours and now the reliable Ming-Chi Kuo has chimed in. In a note to investors, Kuo says this year’s models will have physically larger batteries than the iPhone 12.

As we’ve heard from previous leaks, the iPhone 13 range will find room for bigger cells by trimming components in other areas. However, there’ll be no avoiding the iPhone 13 gaining a little weight as a result, Kuo says.

He wrote (via MacRumors): “The new 2H21 ‌iPhone‌ models feature a larger battery capacity than the iPhone 12 series, thanks to the space-saving design of many components. Hence, the new 2H21 ‌iPhone‌ models are also slightly heavier than the ‌iPhone 12‌. The space-saving design includes integrating the SIM card slot with the mainboard, reducing the front optical modules’ thickness, etc.”

It’s not clear how much heavier the iPhone 13 range will be, if larger batteries are deployed, but the iPhone 12 Pro Max already comes in at a girthy 228 grams. It’s also possible the larger batteries won’t have that great an effect on runtime, but with rumours of a 120Hz display, a larger cell might be needed to retain the current pace.

Twitter tipster L0vetodream (via Creative Bloq) claims the iPhone 13 Mini will pack a 2406mAh battery, while the iPhone 13 and 13 Pro will feature 3095mAh batteries and the Pro Max will see the biggest increase with an 18% larger 4352mAh battery.

Leaker Max Weinbach via EverythingApplePro has suggested that the iPhone 13 will pack larger wireless charging coils on the back, possibly for better heat management or to allow faster wireless charging. While MagSafe can charge at 15w, many of the best Android phones wirelessly charge at far greating speeds than this.

A larger coil could also allows for additional features, like the wireless reverse charge feature used on many Android phones. This could allow a pair of AirPods to be juiced up on the rear of the iPhone 13. This is a feature rumoured for an upcoming iPad.

As with previous models, there are rumours Apple will finally ditch the Lightning port and go completely wireless. Prosser tweeted about a port-less iPhone 2021 last May, suggesting the phones will never adopt USB-C despite pressure from the EU to make the port a universal standard.

In a new note to investors (via MacRumors) Kuo wrote: “If the iPhone abandons Lightning in the future, it may directly adopt the portless design with MagSafe support instead of using a USB-C port. At present, the MagSafe ecosystem is not mature enough, so the iPhone will continue to use the Lightning port in the foreseeable future.”

We haven’t heard of any major updates to Apple’s flagship camera just yet.

So far, Barclays analysts Blayne Curtis and Thomas O’Malley (via MacRumors) have predicted a f/1.8 aperture for the ultra-wide lens in all four iPhone 13 models. This is wider than the f/2.4 aperture found on the iPhone 12 and would offer better low-light performance. However, Ming-Chi Kuo believes the upgraded ultra-wide lens will only be available on the Pro model.

Kuo (via 9to5Mac) has also suggested Apple will introduce a periscope-style lens that’ll offer up to 10x optical zoom without bulking out the body of the phone, following the trend seen in other flagships right now, but this isn’t expected to debut until the iPhone 14 in 2022. The sensor-shift image stabilisation will be carried over from the iPhone 12 Pro Max too, he says.

Tipster Sonny Dickson has also tweeted images of supposed iPhone 13 and iPhone 13 Pro dummies that shows off a larger and more diagonal camera module than that found on the iPhone 12.

How to Download the WatchOS 8 Public Beta Right Now