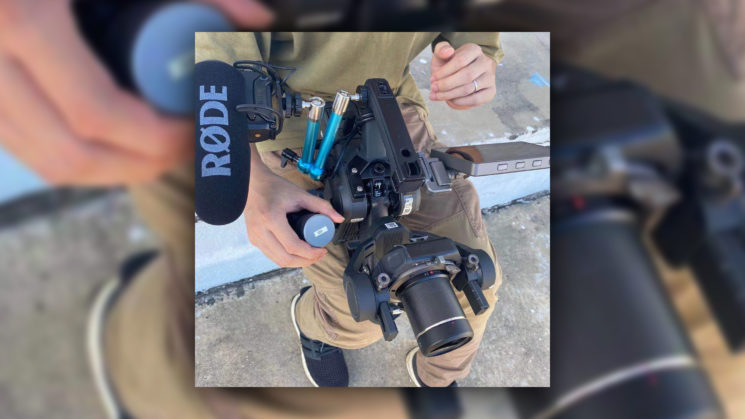 Well, we’ve seen a few renders of it in the past, but now it looks like we have the first photo of the DJI “Pro Camera” out in the wild. A bunch of leaked renders came out in April, courtesy of OsitaLV. Now, both OsitaLV and Kanzhaji has come through leaking a photo of the real thing (likely a pre-production prototype) actually in use.

It’s been a long while coming and now seeing photos of the real deal suggests that we might be getting close to an announcement. The camera shown in the photograph looks virtually identical to those leaked in April, so it’s probably been pretty close to done for a while – at least as far as the hardware goes.

It makes a lot of sense for DJI to start tackling the camera market. After all, there was a reason they bought Hasselblad – and it wasn’t just to be able to use the logo on the Mavic 2 Pro camera. It’s pretty clear that with other manufacturers (like Sony) treading into their territory with drones, and some fairly decent competition in the gimbal space, DJI’s expanding out to start taking on the other guys at their own game, too.

Exactly when we’ll see this new DJI Pro Camera, though… Well, who knows? I expect we won’t have to wait too much longer for an announcement, though. We’re already into August and the non-pandemic trade show season for the second half of the year normally kicks in next month – especially for video, with IBC running in September (although it’s scheduled for December this year).

Maybe we’ll see it sooner than we think if DJI decides to run their own online event. Or we could be waiting for NAB in October, IBC in December or we might not even see the real thing until 2022. Hopefully, it’s sooner rather than later.