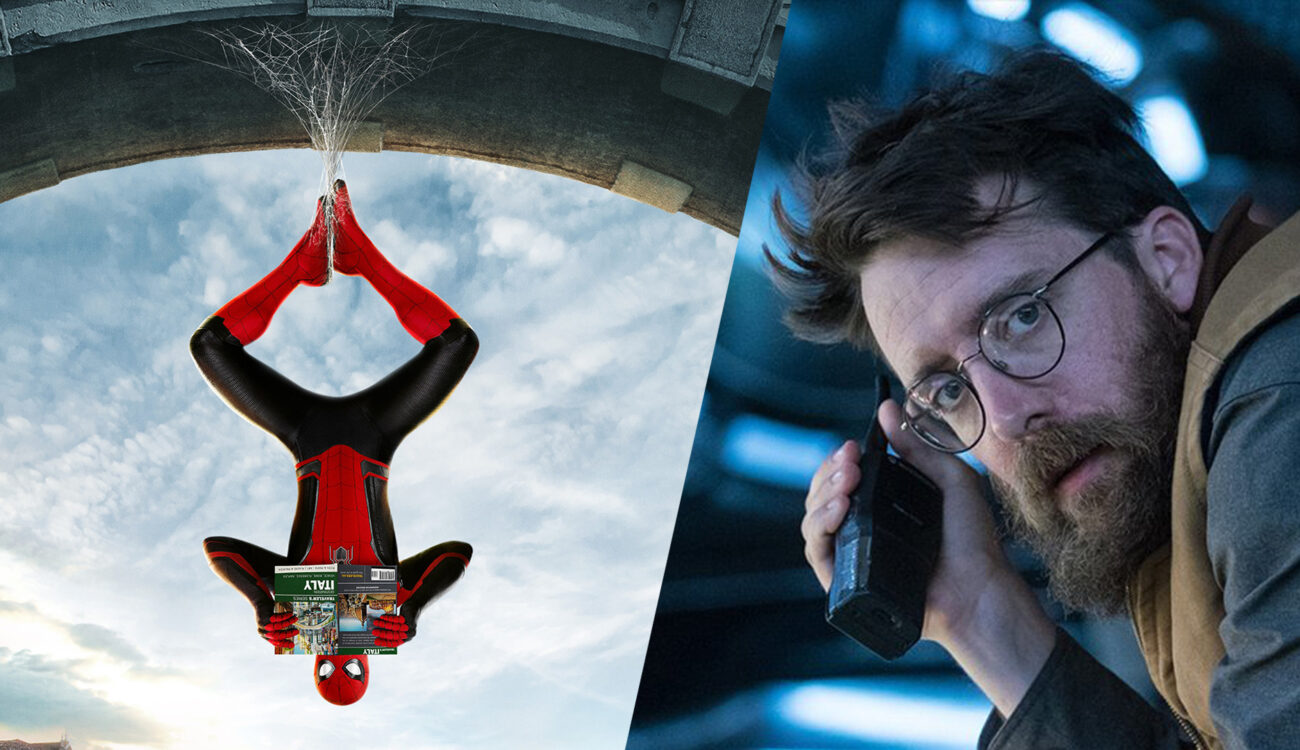 DoP Matthew J Lloyd ’s star is on the rise. He’s already a regular contributor to the MCU (Marvel Cinematic Universe) having shot “Spider-man: Far From Home” in 2019 and had DOP duties on “Thor: Ragnarok” and “Captain Marvel” before that. Last year he got his ASC membership which has cemented his place in the pantheon of cinematography.

But what did Matthew J Lloyd decide to shoot after Spider-Man? Apart from a brief excursion in to the re-framing madness of the short-lived Quibi platform, he decided to help out a first time director, British actor David Oyelowo. David was to shoot his first movie as a director with a film called The Water Man and Matthew brought his huge experience to help him and so went from the Spider-man to The Water Man.

But surely Matthew would miss his Technocranes, gigantic silks and techo-wizardry found in the video villages – The Water Man’s ‘young Disney journey’ feel is a million miles from those huge Marvel sets. But Matthew likes to be near to his actors.

Matthew J Lloyd: Some DoPs are too remote

“In the digital age, there’s a lot of cinematographers who are actually a little bit removed from the set.” Matthew commented when I asked him about his relationship with actors. “They operate in this vacuum of tents and big monitors,  everyone’s kind of wearing headsets and whispering to each other. I tend to be a little bit more old fashioned for lack of a better word.

“I rarely leave the immediate filming area near the camera so I can always see the actors and the camera together and what the lighting is doing. I stay very present in the moment. Some DoPs are more used to working in a separate environment, you know, quarterbacking the whole thing remotely.”

MCU vs a much smaller movie – the differences

Asking Matthew what the differences are between shooting Marvel and The Water Man is really all about me looking for some kind of definitive answer about the excesses of major movies versus the paucity of tiny ones – no such luck.

“I try to have what I have always referred to as a scalable process, meaning that the core of the practice is kind of the same. I kind of approach everything with the same sort of underlying principles, underlying approach and methods.  They just scale up and down depending on what the project is.

“For instance, on a Marvel film which I’ve been fortunate to be involved with several, you have a very close relationship with usually incredibly talented visual effects supervisor, and you’re devising the methodology for how to go about the visual effects of the show. They’re dictating certain methods that we’ll employ based on how they’re going to handle certain effects, the CG components, the CG lighting plates etc.

I wondered if the crew on The Water Man were expecting some large pieces of camera moving machinery to turn up on set. Were they wondering what the ‘Marvel man’ was bringing with them? I asked.

Matthew’s answer showed he has a parent/child relationship with technology. He’s the one in charge.

“I would suggest to anyone going into any film of any size that you just need a sort of a reductive mentality, to some degree because we’re so inundated with technology and tools. A lot of that stuff requires huge monetary and labor investments and often times is not actually value added to the film. The experience of feeling the film is wholly outside the knowledge of what was done to achieve it.”

“People coming in new to our craft might have the instinct to want to do certain things because it feels big or feels professional.  I’ve had days with massive blue screens and huge silks on construction cranes overhead, giant lighting cranes everywhere.  You’re sort of doing it and then you look in the lens and hopefully say, ‘this looks pretty real’. You don’t want to feel all that stuff is there. I don’t want to sense that all that mechanism was there. You gain the confidence to not do things that maybe are unnecessary in the moment or will give you the same result another way.”

No sets so how did you light it?

The Water Man is on Netflix so you might have access to it. IMDB describe it as ‘A boy sets out on a quest to save his ill mother by searching for a mythic figure said to have magical healing powers.’ Which meant a little bit of VFX and no sets, except one small one.

Watch the movie and especially the intense scenes with the boy and his parents and watch a master lighting cinematographer at work. I asked him how you construct a lighting design that looks like there isn’t one.

“I tend to try to treat interior locations in the real world as kind of little mini sets. I look at what the architecture is doing naturalistically with the light, and find the most interesting thing with regard to how the spaces are forming natural light. Then try to rig it like a set, so you have instruments that are replicating the vectors of the natural light but obviously putting it to a movie, or to a motion capture level.

“Often you walk into a real location with beautiful light coming through the window and it falls off in three feet so the minute the actor gets up and walks over to the table they walk into nothing but just sort of ambient shapeless light.

“So we often take what’s informed by the location and then make it more of a set lighting kind of a scenario where that quality of light just reaches further into a room. You can close off certain windows or certain fixtures so that you can maintain contrast and kind of keep it feeling alive and not sort like you walked into a place and started shooting.”

The lighting masterclass continues with Matthew describing how he concentrates mostly, when shooting night location interiors, on the lack of light. “It’s hard because it’s less about light and more about how to get it off of things that you don’t want it on. So you’re using a lot of negative materials that absorb light, you’re putting it on ceilings and putting it on the camera so that the light you do place has the desired effect without washing out everything else around it.

“It becomes a lot about enveloping the space in negative fill, so to speak, that absorbs ambient light, and letting the actual fixtures, just do what you set them to do. Then they fall off and they don’t spill and put volume into the room.”

I ask Matthew J Lloyd a question about the advances in light technology and counter it with a suggestion that new camera sensors call for less light.

“Lighting tools are making things faster, requiring less infrastructure with regard to power and cable and steel to hold the stuff up. But the argument that ‘oh we need less lighting’ has always kind of escaped me. At the end of the day there are scientific principles, physical principles at play when it comes to lighting and fall off. We always used that joke in photography school, that the nice thing about light is it doesn’t go around corners. It doesn’t – you can rebound it and redirect it but innately it doesn’t zigzag, it’s like a bullet.

In the digital age, there’s a lot of cinematographers who are actually a little bit removed from the set.

“In terms of, quote unquote less lighting or cameras being more sensitive, you sort of reach a threshold in my view where it’s not helpful anymore. No more sensitivity will help us craft dynamic images because at some point you need to create a vector of light that informs a space and brings out its natural texture and natural interest. You need the absence of light to create the contrast that’s going to give you that extra effect and drama that you’re after.

“You’re still going to need the basic principles of lighting, intensity, direction and size. The more square footage the softer the light. The smaller the point the harder the light, you know those three principles basically guide everything you’re going to do and they still apply no matter how sensitive the cameras gets.

Never shoot in a forest without an anamorphic lens

The Water Man used ARRI Mini cameras, a Super 35mm model and a large format one. Matthew also discovered Cooke anamorphic lenses, especially the 65mm macro lens which he used throughout the film. The 65mm especially transformed his shooting in the forest scenes which is most of the second part of the movie.

“It’s funny, the forest is one of those places to film where you walk into it and think everything’s going to be great.  You then you put a lens on it and realise that it’s going to be  really hard to capture in a meaningful way. You literally can’t see the forest for the trees. You put up the shots and you’re like, I don’t really even know what I’m looking at, this just kind of looks like mush.

“So we ended up choosing anamorphic. Wide lens anamorphic has this capability of sort of pushing things off of the film plane a little bit, which I’m sure is an esoteric way to describe a very simple technical phenomenon but there’s a bend, there’s a curvature to it. It kind of pushes the planes back a little bit and lets you get more perspective.

The argument that ‘oh, we need less lighting’ has always kind of escaped me

”So the anamorphic, once we got it out in the woods, was incredibly helpful because it let you kind of pull the child actors off of the trees and gave you a little bit of curvature to what you were looking at. It defocuses things differently so the shape of things would change based on their plane and this kind of gave it a little bit of dimension – because the forest can be really, really hard to do well.

“Also from a lighting perspective you’ve got sunlight bouncing off the foliage, different kinds of foliage and everything starts to go kind of green/yellow. Then your other colours are shifting and it’s kind of very, very tricky, so we just tried to take a lot of care to make sure that the kids in the costumes were looking correct in lens and then I kind of control the foliage separately in colour, after the fact. As long as the kids were looking right I knew we could control everything else safely.”

The Water Man is currently streaming on Netflix.

What do you think about Matthew J Lloyd ‘s work? Share your thoughts int he comments below!

iPhone 13 Pro series will arrive with an exclusive LiDAR scanner -

Everything we know about the Google Pixel 6 so far