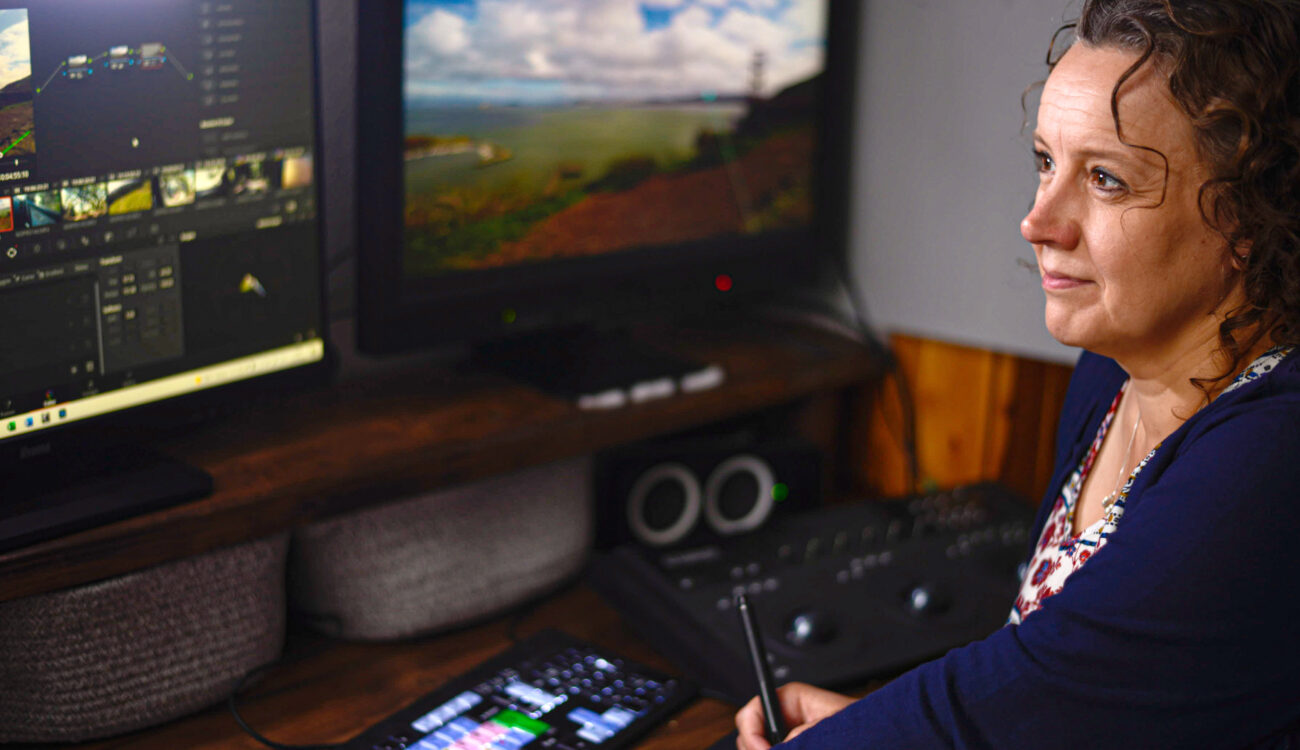 This interview is part of a CineD series celebrating women in the film and television industry. Read our last piece, where we caught up with cinematographer Carissa Dorson here. This time around, Katie Kemp, a finishing artist from the United Kingdom, is our guest.

The Finish Line’s Katie Kemp has done it all. She’s trained in C++, delivered shoes, and even worked from Mr. Motivator’s Jamaican home.

Throughout all this, she’s also finished shows in every genre from Panorama to Geordie Shore, and for everyone from the BBC to Discovery. She’s also experienced the move from tape suites to remote working first-hand.

Read on to learn more about Katie Kemp’s impressive career, including what it was like to be starting a career in TV in the late 90s, and where she hopes the post production industry will go for the future.

Katie Kemp, can you tell us about your start in the industry?

Katie Kemp: I went to university to complete a bachelor’s in science. It was more focused on the technical side of filmmaking – we were actually in the engineering department. We learned everything from how to produce various media formats to C++, oscilloscopes, and the mathematics proving the Nyquist theorem.

After graduating I moved to London, where I got my first job as a runner at a post-production house called Component in 1997. Being a runner involved all the usual tasks like getting tea, as well as some more unusual ones.

What were some of the more unusual tasks?

K.K.: Once, I had to go and buy a belt for someone who forgot theirs before going into a meeting. Another time, I was helping this really talented, eccentric producer carry some tapes from our studio back to her office. This was a normal task, except the producer didn’t have anything on her feet!

She later called me asking whether she had left her shoes back at our studio, as she couldn’t find them. I confirmed she did leave her shoes there and brought them back to her.

That’s hilarious! So, how did enjoy your first taste of professional editing?

K.K.: Well, let’s just say that at first, my skills were a bit hit and miss. I did once set fire to the carpet while trying to solder wires to repair an edit suite! Despite that, I found editing incredibly fun.

The tape suites back then were these giant desks with buttons everywhere that made you feel like you were controlling a starship, which was obviously cool.

Did you ever feel disadvantaged because you were a woman?

K.K.: When I started in the industry, there weren’t really many female editors. It was all tape suites, and I did once get told that they were too technical for a girl – but I certainly proved that person wrong!

Overall, I do feel lucky that I never really felt at a disadvantage for being a woman. There was this guy that started running at the same time as me. We got promoted into the machine room together, then we got promoted to become junior editors and full-time editors together too. We got the exact same pay rises throughout the seven years I was at Component. I then moved over to Sanctuary post, then to The Edit & Sound Store, followed by Prime Focus, and now The Finish Line, where I currently work.

How did it feel going from runner to editor and beyond?

K.K.: For me, it was all very exciting. I saw the industry transition to Avid first-hand. It was all tape suites when I first started my career in London. Sure, there was an Avid in the back room, but nobody really talked about it – essentially it was ignored as the offline were still cutting on Lightworks.

Eventually, Symphony arrived, and it was a big thing. We all moved into Symphony and in just a few years all those tape suites I learned on had mostly been converted.

All the while, I still had some hilarious experiences. Once I was flown to Jamaica to work with Mr. Motivator! Production essentially decided they needed to offline where they were filming these fitness videos. So, they flew an Avid out with me as the editor, and there was also a runner. We all sat in Mr. Motivator’s house (check his YouTube channel here) creating these fitness videos. It was an incredible experience.

So, we’re guessing you liked the transition to Avid? Can’t beat Mr. Motivator!

K.K.: Personally, I didn’t mind the change. And coming from tape, I felt I had the best of both worlds. Tape was a solid grounding in technical understanding, then the move to Avid opened up many more creative possibilities.

Together, they taught me the art of remaining calm. When I started on current affairs, for example, they were already on Avid for the flexibility but playing to tape for speed of delivery of the master program. The tape needed to leave the building and be with the broadcaster the same day for transmission.

There’s an art to remaining calm while knowing the tape that’s going to be on air in a few hours is still in your deck! You have time to make a few essential changes, and panicking isn’t going to help it get done faster. You do your changes, and that’s it – it’s going out.

What do you love most about the industry today?

K.K.: How much it always surprises me. Just take 2020, for example. The whole industry adapted to working from home within weeks. I’m convinced that even just 2 years ago, we wouldn’t have been able to remote into the studio like we have done now.

For the future, I believe the whole industry needs to move into flexible and remote work. The Finish Line is well-known for prioritizing employee well being, so we can work flexibly even after the pandemic. I just hope others follow in our footsteps!

Sure, there are times when you need to be on-site. I wouldn’t want to be making a current affairs program on a hugely tight deadline and have my home kit fail. There’s no backup. In a facility, there’s another suite right in the next room.

For long-form and documentary work, if the client is happy to set styles and looks at the start, there’s no reason why you can’t be at home for anything but a review day. People are talking about a hybrid way of working. For me, that’s absolutely the future.

Are you inspired by Katie Kemp ’s work and career? Do you also hope for the same changes for the future? Share your thoughts in the comments below and stay tuned for more exclusive profiles from women in the industry.

10 Excellent Tips to Take Care of Your Computer During Summer