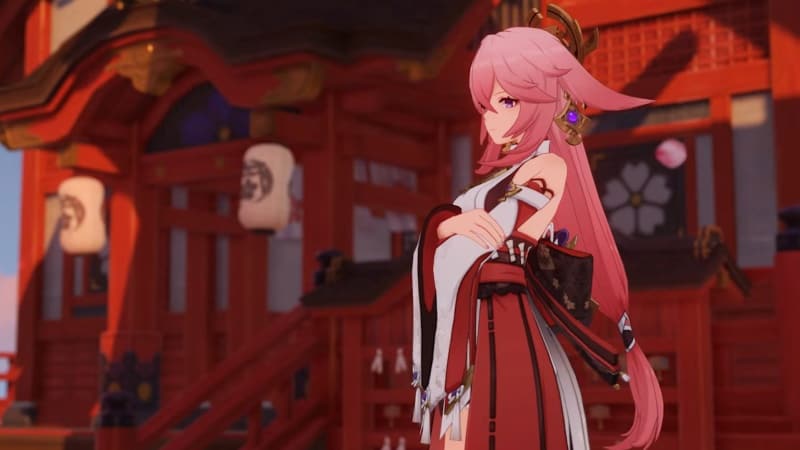 With the arrival of Genshin Impact version 2.2 nearly upon us, which is due to release on October 13th 2021, many players are keen to know what version 2.3 holds in store for them. Whilst nothing has been officially announced by MiHoYo, several old leaks may hint towards upcoming content. Keep reading to find out what players could expect to see soon in Genshin 2.3!

Yujin and Yelan are characters who have been mentioned before in the game, but players are yet to see them. Given their appearance in the Moonchase Festival cutscene, it is likely that they will appear in the near-future. It has been speculated that Yujin is an Anemo character, although there are no leads on her weapon of choice. Yelan can be seen with a Polearm in the Moonchase Festival cutscene, but her Vision remains a mystery – although her colour palette might suggest she uses Cryo.

Arataki Itto is a name that has been cropping up recently in Chinese leaks. Allegedly, he is tall, muscular and has a pair of large horns on his head, possibly indicating he is of Oni origins. Interestingly, it has been hinted that he may be a Geo user, although his weapon is yet to be revealed.

Will Yae Miko and Gorou finally be released?

Yae Miko and Gorou were featured heavily in the version 2.1 Archon Quest, and were leaked early on to be five-star characters. It is rumoured Yae Miko is an Electro Catalyst user, whilst Gorou has been revealed as a Geo Bow user. Given both of their prevalence in the main story, it can be speculated that they may appear soon on their own Character Event Wish banners.

Many players have been desperate for Albedo and Ganyu re-reruns. Both characters had banners during version 1.2. But neither have been seen since, and so there’s a chance they might appear in version 2.3.

This would make sense. By the time version 2.3 releases, it will have been over a year since Albedo’s first banner. And another year since Ganyu’s. If we follow the trend of there being two character re-runs per version update, it wouldn’t be far-fetched for Albedo and Ganyu to reappear.

How to block Windows 11 update

How to factory reset Windows 11