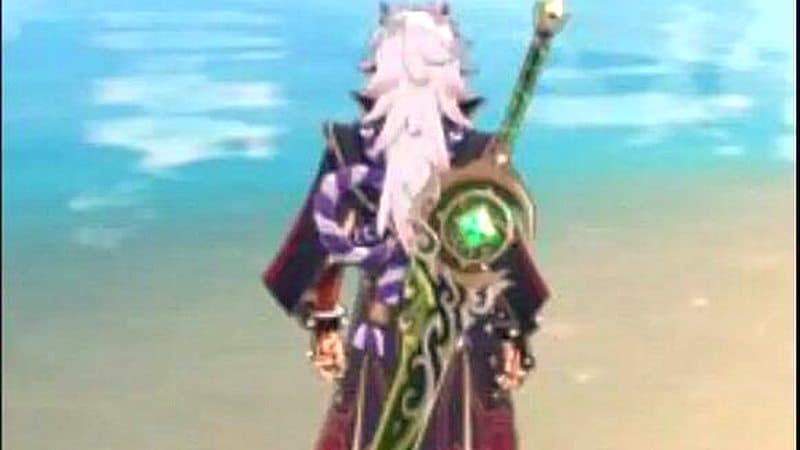 It appears that Arataki Itto, a character whom many players have been looking forward to in Genshin Impact, has finally had his model leaked. Likely a feature of the 2.3 update, he was previously leaked to be tall, muscular and have a pair of horns, and from his model we can also see he has a mane of flowing white hair and wears traditional Inazuman garb. The front of his model has also potentially been leaked, and in the image we can see his bare chest decorated with tattoos or body paint, and what appears to be an Oni face on his belt.

Interestingly, we can also see him equipped with a Claymore which is yet to be released, which could very well be a weapon called The Other Side that was leaked a while ago. Judging by the intricacy of its design, it’s highly likely that this is a five-star weapon. Whether this Claymore is his signature weapon or simply an upcoming weapon we cannot be certain, but regardless we can speculate that Itto will be an absolute powerhouse.

Itto’s Vision is not visible in the image, however, it has been rumoured that he is a Geo user. This would make him the second Geo Claymore character alongside Noelle. It’s likely his play style will be different to Noelle’s, perhaps focusing more on ATK than DEF, although this is yet to be leaked.

In terms of his personality, from what we are told in-game by various characters he is competitive, hot-headed and determined. He had his Vision taken from him as part of the Vision Hunt Decree, and as such he has a one-sided rivalry with Kujou Sara after being defeated by her. It is unknown whether his Vision was returned to him after the abolishment of the Decree or not. Intriguingly, it has been rumoured he possesses Oni blood.

While there is still no definite news on when Itto will release, we can speculate that he might appear in version 2.3.

The richest Fortnite players from the Twitch data leak

How To Upgrade to Windows 11