Intel will make chips for Qualcomm, to reveal Angstrom-based chip by 2024


Intel is losing a big partner with Apple’s switching to ARM-based chips. While the PC industry still focuses on x86 processors, the chipmaker also needs to deal with AMD that has been on an exponential growth since Ryzen’s arrival. After its fiasco with x86-based smartphone chips, the company is now preparing a new comeback to the smartphone scene. In fact, Intel will be making chips for Qualcomm very soon, as well as packing for Amazon Web Services. It’s interesting to see Intel joining one of its biggest competitors but clearly shows that the company is looking at ways to return to the smartphone segment, event through this indirect route.

Unfortunately, none of the companies have revealed when the first Intel-made Qualcomm chips will hit the market. However, it did give a few more details about the new venture. First things first, Intel states that it will no longer use the nanometer-based node nomenclature that has been the norm in the industry. This includes the company’s 12th generation Alder Lake chips later this year. The reason probably has to do with the fact that Intel is lagging behind competitors AMD, Samsung, and more in terms of node size. Instead, Intel will make use of a new nomenclature. Apparently, this new nomenclature will give “a more accurate view of the process nodes across the industry”. 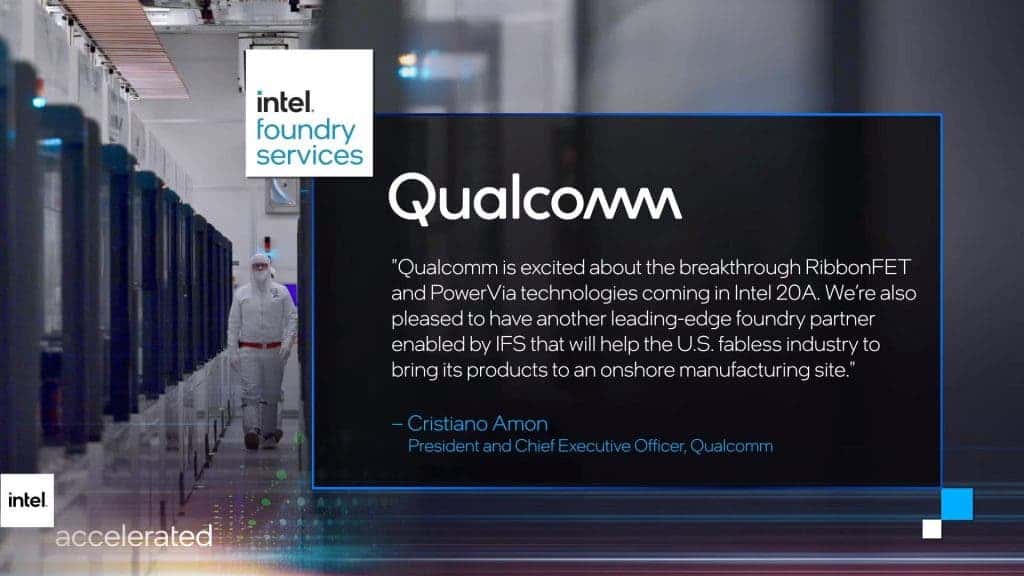 The company will no reference to its 10 nm chips as Intel 7, which is meant to suggest that these 10 nm chips are at par with 7 nm processors being produced by competitor AMD. Essentially, Intel is trying to claim that its 10 nm chips are powerful as AMD’s 7nm Ryzen chips. Intel 7 will also be the name for the company’s third-generation 10nm SuperFin technology, which was used in the Tiger Lake chips last year. The company claims these chips will offer approximately 10-15 percent performance per watt improvements over the 11th generation variants.

The company will keep pushing its 7 nm architecture but will call it Intel 4. Curiously, until Intel reaches this amount AMD will probably be a step or even two steps below. The company’s 7 nm architecture will use the EUV technology found in TSMC and Samsung’s 5 nm nodes. Intel’s 7 nm chips have been delayed to 2023. They will pack 200 to 250 million transistors per square millimeter, higher than the 171-30 million that TSMC’s 5 nm chips hold. According to the company, the technology will bring 20 percent performance per watt improvements.

Intel will be using a new “Intel 20A” process to make Qualcomm’s next chips. This will see a new processor architecture called RiboonFET, which is an update to the FinFET process that’s been in use since 2011. It promises higher transistor density and smaller chip sizes. The 20A process also uses PowerVia, a technology that allows chips to be powered from the back, instead of having everything on the front. As per the company, the Intel 20A process will bring the “Angstrom era”, pushing node sizes to below a nanometer. However, don’t expect these before 2024.

Last but not least, the company announced updates to its Foveros technology. It allows stacked packaging on chips. Foveros is widely seen as Intel’s answer to ARM chipsets made by Qualcomm, Apple, and Others. Foveros Omni will offer more customization and choice in terms of what companies can do with the technology.

Although Intel’s claims sound promising, the company still needs to convince the industry and its users. As we said before, the chipmaker already lost Apple’s business to TSMC’s ARM-based chips. Although the company’s 10 nm solution is on par with the competition, it’s an undeniable fact that the competition is walking ahead.

These HP Chromebook Deals Save You Tons on Back-to-School

10 tips to help you get sharp photos when shooting handheld