Apple will begin asking for permission to collect user data to serve personalized ads in iOS 15, specifically in the App Store and Apple News. Previously, this information was collected by default. Note that Apple previously required third-party applications to request permission to collect user data, and now it will begin to adhere to this rule itself.

The personalized ad delivery pop-up will appear when the App Store is launched on devices running the latest beta version of iOS 15. This window displays a message that advertisements will help users find apps, products and services that match their interests and needs. at the same time protecting their privacy by “device-generated ID and no ad information tied to Apple ID”.

Apple policy may use a variety of device information to personalize ads, including location if the user has authorized access to it, data about searches and purchases in the App Store, and news viewed in Apple News. iOS 15 allows you to completely disable targeted ads in the Settings app.

Curiously, in the case of its services Apple uses the word “personalization”; while for third-party products, the term “tracking” is in use with a clearly negative connotation.

The innovation can be seen as another concession related to the antitrust case, in which the company is involved. In addition, Apple has allowed payments to bypass its system in some applications, as we reported earlier. 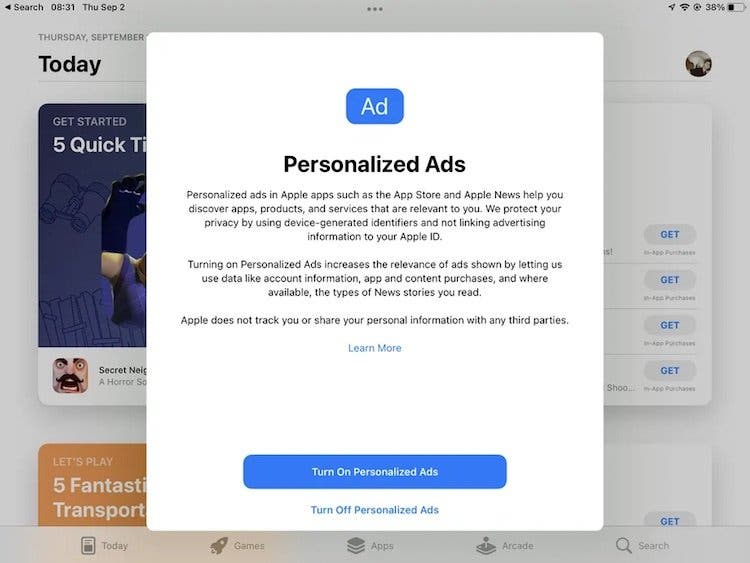 The share price of the American company Apple has reached a record high. On Monday, the price of securities of the technology giant rose by 3.04%; and by the end of trading for one share of the company gave $ 153.12. Adjusted for a stock split, this is the best close in Apple history. Above this value, the company’s shares traded only in the middle of the day; when the value of one security reached $ 153.49.

Against the backdrop of these successes, Apple’s market capitalization for the first time at the end of the day exceeded $ 2.5 trillion and amounted to $ 2.531 trillion. This means that Apple became the first American company from the so-called “club of trillions”; to overcome the threshold of $ 2.5 trillion in market capitalization. Currently, all over the world, only the national oil company of Saudi Arabia Saudi Aramco is worth more than Apple; the capitalization of which is $ 7.01 trillion. As for the “Trillionaire Club”, in addition to the cupertino company; it includes Microsoft ($ 2.281 trillion), Alphabet ($ 1.934 trillion), Amazon ($ 1.733 trillion) and Facebook ($ 1.073 trillion).