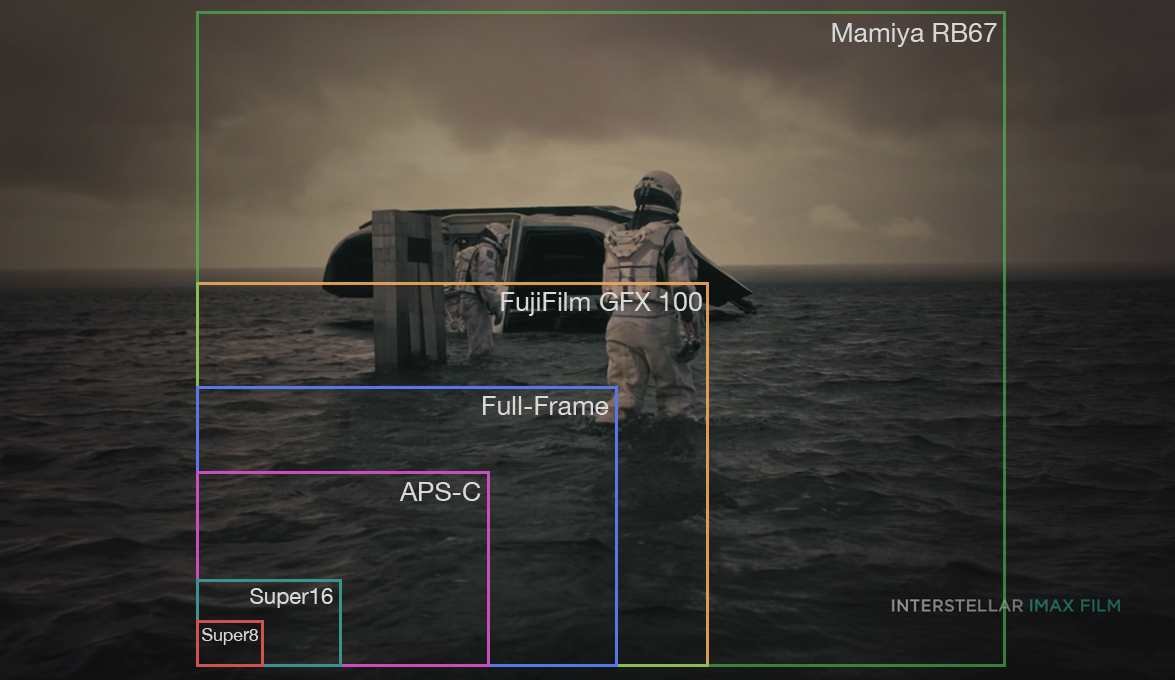 You know the look. You’ve seen it in big-budget features. It’s the Christopher Nolan look. The Lawrence of Arabia on the big screen look. The kind of image you can only get if you have the Hollywood budget to rehouse Hasselblad lenses. Or rent equipment that can’t even be purchased. Be it an IMAX camera for Dunkirk, the Panavision Panaflex 65 for The Hateful Eight, or the Arri Alexa 65 for anything from Joker to Solo: A Star Wars Story, Medium Format Cinematography is a staple of larger than life cinema. Until now, this larger-than-life image has been out of reach for the majority of filmmakers. But with the release of new reasonably priced medium format cameras such as the Fujifilm GFX 100s, a new revolution is on the horizon.

To really understand the importance of medium format cinematography, we have to have a reference point. There is a myriad of sensors and film sizes out there. For decades, the default standard for celluloid film has been Super35. This is roughly around 24mm by 18mm or a vertical exposure of 135 photography-size films. Which is mirrored in the APS-C Sensor. That is why the Canon 7D was so popular at the beginning of the DSLR revolution. Second to the Canon 5D, that is (at least for some).

If we go smaller, we get the Super16 film size: digitally mirrored in the Original Blackmagic Pocket Cinema Camera and the Digital Bolex. Roughly at 12.5mm by 7.4mm in size. Lastly, our larger frame sizes end up being VistaVision (the size of 135 photography film, commonly called 35mm film) and the full-frame digital sensor. The 36mm by 24mm, give or take a few millimeters depending on your camera and preferred film stock. A sensor that we all reference today.

But What Does This All Mean for My Image!?

Great question! Each frame takes up a specific space within the image circle of a lens, and one lens can produce multiple aesthetics depending on the frame size you choose. This becomes incredibly important in creating a visual style for your imagery. For example, smaller frames tend to create less lens compression as you have to use wider lenses to achieve equivalent fields of view to larger sensors.

This is where medium format cinematography becomes such a fantastic tool for filmmakers. Originally, medium format film was used on Mamiya, Hasselblad, and Rolleiflex cameras, to name a few (there are many more). The width of this film was so huge they had to measure it in centimeters instead of millimeters. Sizes range from 6×4.5 to 6×7, making our frame size 60mm by 70mm.

Take a look at Manuel Lübber’s comparison video between an Alex Mini LF and an Alexa 65 to truly understand the difference a medium format frame can make.

These larger frame sizes dwarf the image circle of every 35mm photography and Super35 cinema lens on the market, which is why Christopher Nolan used rehoused Hasselblad lenses for Dunkirk and Tenet, as well as several custom lenses from Panavision. Medium format lenses are larger and create a bigger image circle that covers these gigantic frame sizes.

This has a unique effect on your recorded image. Depending on your framing, your subject is separated not only from your background but also foreground. It creates a larger-than-life aesthetic that is costly to achieve. Imagine getting the intimacy of an 80mm lens, with the width of a 35mm lens!

Larger Than Life: Medium Format for the Masses

Between 2014 and 2016, Leica, Pentax, and Hasselblad released several medium format cameras that allowed you to shoot HD or 4k video, depending on the brand. While the video features were lackluster upon release, medium format video has been improved upon by later releases from Fujifilm.

The Fujifilm GFX 100 was an incredible medium camera that provided ProResRAW in 4K when partnered up with the Atomos Ninja V recorder. Now with the Fujifilm GFX 100s that was just released, that same RAW output is available for under $10,000. While that may seem steep, it’s a bargain when compared to the rental-only Arri Alexa 65.

While both the Hasselblad and Fujifilm cameras have a digital sensor at 53.4mm x 40mm and 43.9mm x 32.9mm respectively, it is nowhere near the size of 65mm or IMAX.

We Need a Bigger Boat

How do we increase our image size to be able to play with the rental-only crowd? This is where the magic of speed boosters completely changes the game. By pairing a Fujifilm GFX 100s with a Metabones 0.71x Hasselblad V to Fuji G Speedbooster, we are able to get a gorgeous medium format frame comparable to an 80mm image circle!

Are Hasselblad V lenses too expensive? Did you find a bunch of Mamiya 645 lenses in your grandad’s attic? Fear not!

Kipon makes a 0.7x Mamiya 645 to Fuji GFX Speedbooster as well. The Media Division YouTube channel did a great breakdown on the Mamiya 645 lens lineup, which is a must-watch.

A Bigger Yet Cheaper Boat

While the GFX 100s is an affordable medium format camera, it is still too expensive for some micro-budget or no-budget filmmakers. But with the magic of speed boosters, we can still achieve a larger frame even when using full-frame cameras.

By taking cameras such as the Sigma fp L, Canon R5, or the new Sony FX3, and combining them with Kipon Speedboosters we can adapt Mamiya 645 lenses to E-mount, R-Mount, or L-Mount. This set-up would provide a comparable image to a 56mm diagonal frame, or roughly 46mm by 31mm! Think of this as the Super35 of Medium Format Cinematography.

The Future is Medium Format

While all of the above options may not have the ergonomics or workflow of an Arri Alexa 65 or a Panaflex 65, they are amazing options for filmmakers to achieve an unattainable look. In the end, all of these cameras and lens combinations are just tools. Some may not need or want the look of medium format frame sizes, but it is incredible to see that these tools are finally within reach. What the DSRL revolution did for budget-conscious filmmakers, this new medium format evolution will once again change how we create our imagery.

Guys, what do you think? Will you be using these new tools on your future projects? What does a medium format image mean to you?

Modem vs Router vs Modem Router Combo (Best for Gaming?)