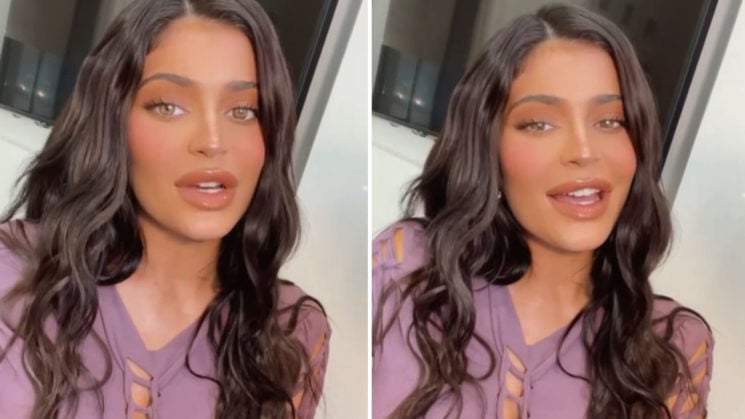 Kylie Jenner and her makeup collection have got under fire a few times so far. The young “media personality” announced her latest collection yesterday, and yeah – she got slammed again. This time, it was because she was promoting a makeup line with a heavy Instagram filter on her face.

Kylie posted a video to her Instagram and Twitter yesterday announcing her new “clean and vegan” collection. Do you notice anything weird?

Yeah, there are tons of glitches in the video, and her eyes look especially weird. In addition to a bunch of eloquent comments like “YAAAAS,” “Queen,” or a bunch of heart emojis, some people also noticed that the star was using a face filter. And they were wondering why on Earth someone would use a filter while promoting makeup. I mean, do your products suck if you have to use a filter while promoting them? Or is there something else?

Personally, I see three problems here. The first one is promoting makeup with a face filter turned on. I would consider it as some kind of false advertising and deceiving the potential buyers. Speaking of deception, let’s talk about the other two problems which I perceive as way more serious.

Other than some negative comments on Instagram, most of the others were left by Kylie’s fans. They write that they love her, how much she means to them, and so on. If you’ve never heard of parasocial relationships – you’ll find some perfect examples among these comments. A parasocial relationship is, put briefly, a fascination and one-sided relationship with a person who doesn’t know that you exist. So where am I going with this?

Kylie’s hardcore fans who have a parasocial relationship with her most likely believe anything she writes or does. I saw some folks telling her in the comments how gorgeous her contacts were. Okay, not everyone is that gullible to think these are contacts and not a filter. Still, out of 245 million followers, I assume many of them look up to her and want to look like her. Or look like the filters she uses, anyway. We’ve already mentioned the dangers of social media and its fakeness and how it can influence young people, and I believe that posts like these are among those that have a bad influence.

Last, but not least, how insecure does someone have to be to not be able to appear in front of the camera without a filter, even when wearing (and promoting) makeup? Kylie is a very young and very beautiful young woman, and I can’t help but wonder how insecure she must feel. “Her body dysmorphia is off the charts. Someone needs to help her,” one Redditor wrote under a screenshot of Kylie’s video.

“The glitching face and glitching eye color while you’re promoting your [makeup] line,” another Redditor writes. “She’s not only representing her line in this post, she’s also representing Ulta. Just seems super unprofessional to me.” While it sure is unprofessional, I think that’s not the biggest problem here at all. I’m more concerned about the message posts like this send to young and naïve girls.

To be clear, I have nothing against filters per se. There are some really fun ones to play with, especially those that turn you into an animal. But trying to pass a filter as the way you actually look, especially if you have a huge follower base… Well, that’s a different story. That’s why I liked that new Norwegian law that demands celebrities and influencers to disclose when their images and videos were edited, and I hope something like this will become a common practice worldwide.