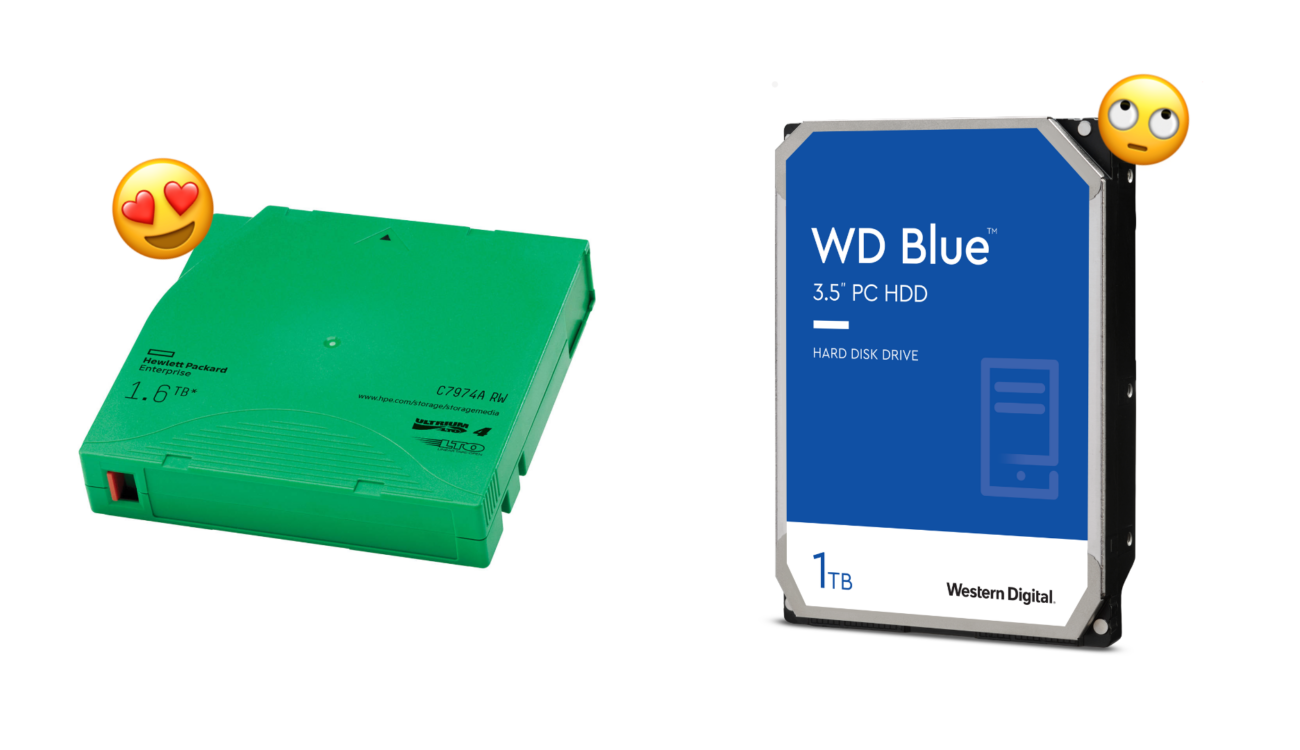 Long-term data backup is something we don’t think about often, but it’s extremely important for future reuse of footage and data. Is LTO-tape an affordable and long-lasting alternative to HDDs in the near future?

Most people store their work on HDDs hard drive disks, which turn with 5400 or 7200 revolutions per minute. But things in motion have a high likelihood of getting damaged by either friction or sudden movement. While a SSD has a pretty fixed lifespan of around 3,000 to 100,000 writing operations or 60 to 150 TBW (terrabytes written), an HDD could theoretically last forever, but usually fails after about ten years, and with the right (or wrong) handling can break in the first two minutes. Backups can’t fully save us of these digital tragedies, and even cloud storage is fragile, as you can see when Europe’s largest cloud provider OVHcloud’s data center SBG2 burns down.

So how can we save our sacred digital property for as long as possible?

That’s where an old technology comes back into play: tapes. While we think of MiniDV and VHS tapes, magnetic tape can be much more than that. LTO stands for Linear Tape Open and is a standard developed by Hewlett Packard Enterprise, IBM, and Quantum for half-inch tape cartridges, with the current generation being LTO-8, and LTO-9 planned for the end of this year. LTO-8 can store 12TB natively and up to 30TB compressed, LTO-9 goes even further with 18TB native and 45TB compressed storage capacity. Don’t get too excited about those compressed numbers, though… these are just hypothetical calculations and are not achievable with already compressed codecs like H.264, Apple ProRes or REDCODE.

The maximum read and write speed is around 360MB/s or 400MB/s with LTO-8 or LTO-9 tapes, respectively. With compressed data it even goes up to 1000MB/s, where even some PCIe SSDs can’t keep up.

One huge advantage compared to HDDs is the life expectancy of around 30 years for most of the LTO-tapes. This makes this medium very much suitable for data backup and archival of media files.

LTO-tapes do have their caveats, though. Not only are they mostly rated for “just” around 20,000 passes (read and write), but as their name suggests, it’s a linear media. Media gets written and read in an end-to-end pass, meaning placing or retrieving only one file in the middle of the tape is not possible. This is not a medium meant for servers with live projects all day long. LTO-tapes are meant for long term archival storage and backup.

The workflow is also quite different to HDDs. LTO-tapes don’t have ports, they have to be inserted in LTO drives located usually in PCs or servers, where the tape actually leaves the cartridge and gets spun on a different spool inside the drive. Some use LTO to create a regular backup of the data being currently worked on and afterwards store them off-site. Retrieving data back from LTO also means writing all of the data somewhere else, like an HDD. The tapes are made to be stored offline, that ensures that no electrical components are close to the tape which could damage the data on it. Because the drives are the most expensive part in LTO architecture, most users only have one or two drives.

Is LTO a hype or a long term option?

The LTO standard in general will probably stay around for a longer while. All LTO drives are backwards-compatible to some extent (LTO-8 drives accept LTO-7 cartridges as well) and with all three founding companies involved since 2000 a discontinuation is highly unlikely in the foreseeable future. The LTO Consortium already has a roadmap for the next three generations, LTO-12 is planned to have a capacity of 144TB natively.
Some additional functions of the newer generations of LTO include AES-Encryption and WORM (write once, read many) capability for sensitive data.

With time and enough data comes the organizational problem of finding the right drive with the desired files. Most LTO management software comes with some form of a Media Asset Management function, or MAM. This creates a database for all the data being written on various tapes and helps you find the drive with the files you want.

Is LTO-tape a solution for everyone?

Definitely not. With the drives sometimes costing around 4000€/4000$ this is still very expensive option for most small post production companies. The break-even point is around 300 TBs compared to traditional HDDs. But as stated before, it has a completely different use case than HDDs. If you need to store large amounts of data for very long periods of time and retrieve data rarely from time to time, then LTO could be interesting to you.

If you want the safety and longevity of tape but don’t want to pay the high price tag for drives, an option would be online archive storage services like Amazon Glacier, Google Archive Storage or OVHcloud’s Cloud Archive. The storage itself is cheap – Amazon Glacier’s for example is 0.004$/GB per month, only the retrieval of data becomes expensive quite fast with 0.03$/GB. It also takes three to five hours until your data is available for download. Enough regular archive data would make cloud backup inconvenient though, with your local internet bandwidth becoming a possible bottleneck and prices stacking up.

How do you archive your files? Would the new LTO-tape be an option for you? Let us know in the comments.