The Pureplay Z7 is the latest pair of wireless earbuds from the Chinese manufacturer Lypertek. The company came into the limelight after the launch of its excellent Tevi model, which has since then been replaced with the largely identical Pureplay Z3.

I reviewed the Tevi and also the newer Levi models last year and found them to be some of the best wireless earbuds in their price range. Compared to most other brands in their price range, the Lypertek products had more focus on audio quality over superficial features and to this day remain two of my favorite wireless products that I’ve reviewed. 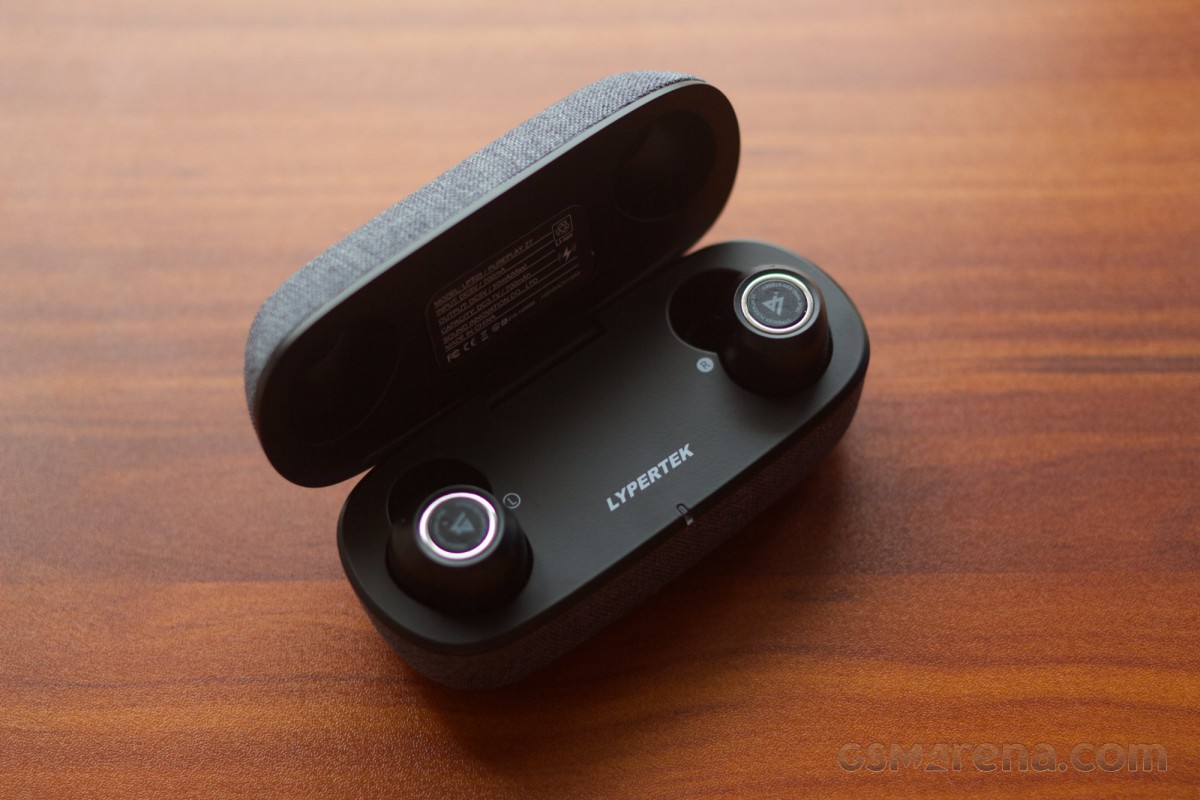 The Pureplay Z7 is a more premium entry in the series, superseding all previous models. This one claims to have an improved audio quality experience, with the addition of a triple-driver setup. The Pureplay Z7 also features Bluetooth 5.2 and Qualcomm aptX Adaptive codec.

At a price tag of $200, the Pureplay Z7 are a cool $110 more expensive than the second-in-line $90 Pureplay Z3 model. In fact, they cost almost as much as all other Lypertek models combined. That’s quite a premium from what is still a relatively unknown brand, as you could get the Samsung Galaxy Buds Pro for less.

It seems then that the Pureplay Z7 have a rather arduous task in front of them. Let’s see how well they perform.

The Pureplay Z7 have mostly basic packaging. Apart from the earbuds and the typical three sets of silicone ear tips, the only other interesting bits are the three pairs of foam tips and three pairs of replacement dust covers for the speaker ports. Unfortunately, there was a rather alarming issue with my packaging. For whatever reason, the foam tips that I received were too small to fit. The Pureplay Z7 has a wider than usual speaker port, which isn’t too much of a hassle for the silicone tips to spread over the small rubber insert inside the foam tips simply could not. I tried for a fair bit of time to try to attach them and it was only when it seemed that it was far more likely that I’ll rip the tips than get them on did I let it go. 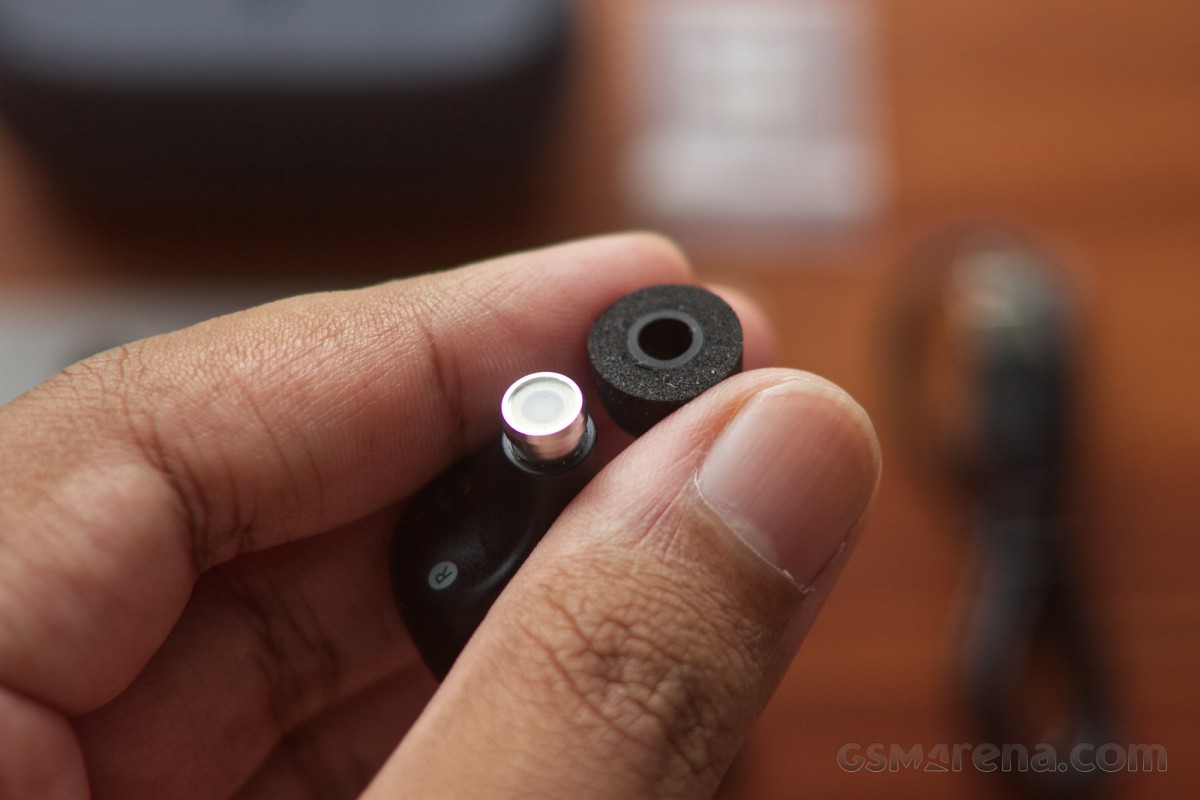 This seems like a quality control issue as there was another problem, of sorts, with the packaging. The box had another three sets of silicone tips in a bag that weren’t supposed to be there. Nowhere does Lypertek mention that the Z7 come with six pairs of silicone tips, with each having an identical copy. It has to be an error at the factory, just as it was an error to put the wrong size foam tips in the box.

The Pureplay Z7 have the same chubby earplug style design as the Pureplay Z3, née Tevi. It tends to stick out far too much from your ears and is also a fair bit heavy.

The outside of the earbuds has a physical button for controlling playback. I am not a fan of this design, as it requires pressing the earbud deeper into your ears every time you press the button, which can get quite uncomfortable. As such, I almost never used them. 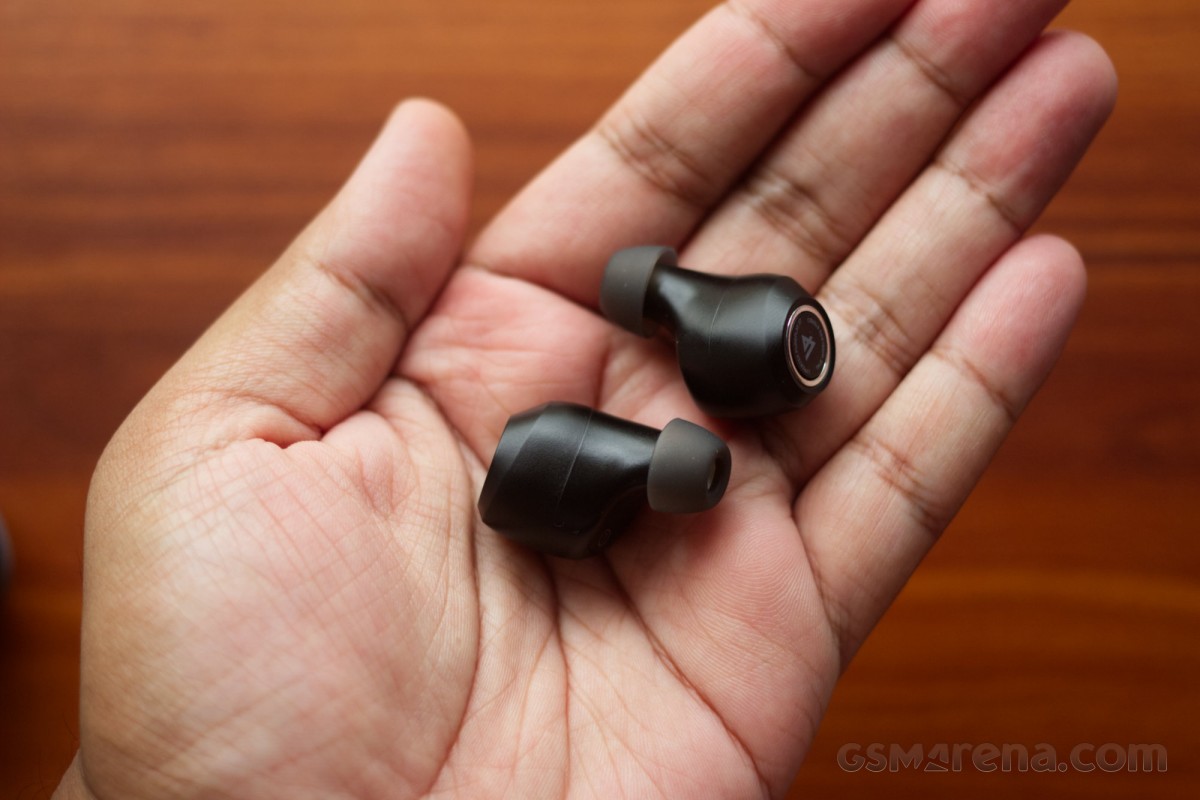 The tube jutting out of the earbuds is thicker than usual as other than serving as the driver port it also helps anchor the earbuds in your ears.

Unfortunately, because of the mechanism by which they sit in your ears and the weight of the earbuds, the Pureplay Z7 generate a sort of pendulum effect, which causes them to bounce in your ears as you walk. This tends to sound like audible shocks in your ears every time your heel touches the ground.

The earbuds are IPX5 water-resistant, so they should survive sweat, rain, and the occasional splash of water. As for the case, it has a similar appearance to that of the Pureplay Z3 case. The plastic body is covered in a fabric layer, which has an interesting appearance and texture, although from experience I know can stain over time.

This case, for some reason, replaces the multi-LED on the Pureplay Z3 case with a single, less useful one and the earbuds inside are placed upside down. Apart from that, there’s nothing particularly noteworthy about it.

The Pureplay Z7 were comfortable to wear over extended periods for me. The speaker tube goes deeper than usual inside the ears but I didn’t mind it much as it also gets an excellent seal in the process. I could wear these for hours — and I did. 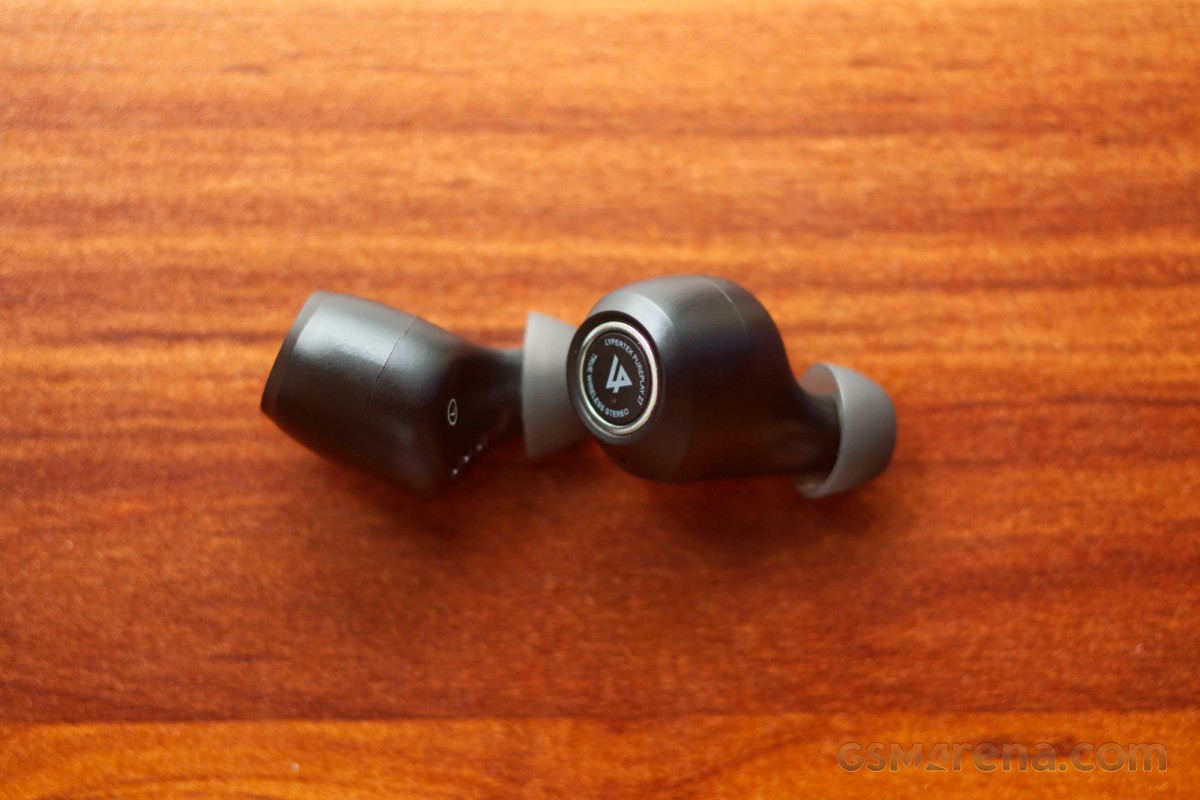 The issue, as mentioned before, is while walking. The constant oscillation of the earbuds in the ear makes for a rather unpleasant experience where there are audible shocks in the ear every time you take a step. I simply cannot see myself using them while walking around, which is a rather big issue for a pair of wireless earbuds.

The Pureplay Z7 utilize a triple driver setup, consisting of dual balanced-armature drivers and a single dynamic driver of unspecified size. The dynamic drive uses mylar film and high purity PPF titanium plating with N52 neodymium magnets. The BA drivers have had their nozzles removed to fit within the confines of the earbuds and the tuning has been adjusted to compensate.

The Pureplay Z7 use Qualcomm’s QCC3040, which is designed for low-power use in TWS earbuds. The chip supports Bluetooth 5.2 and Qualcomm TrueWireless Mirroring technology. It also supports Google Fast Pair but the feature has not been enabled on the Pureplay Z7. 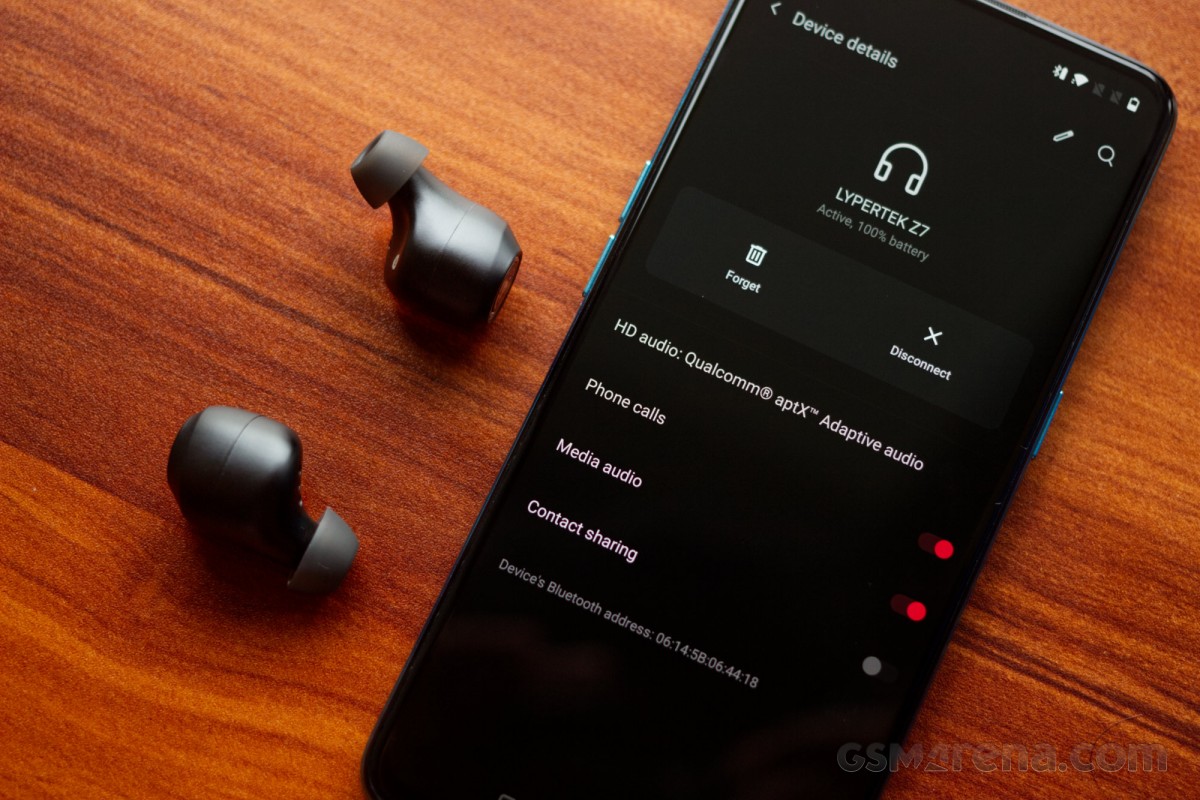 The Pureplay Z7 support SBC, AAC, and aptX Adaptive codec. The last one supports 24-bit, 48kHz audio at a variable bitrate of 279kbps to 420kbps depending upon connection strength and RF interference.

The Pureplay Z7 do not support active noise cancellation. There is, however, a transparency mode available, which can be enabled through the app.

The Pureplay Z7 have a compatible app for iOS and Android. The app is pretty simple, letting you adjust the EQ, controls, LDX Audio mode, and update the firmware. 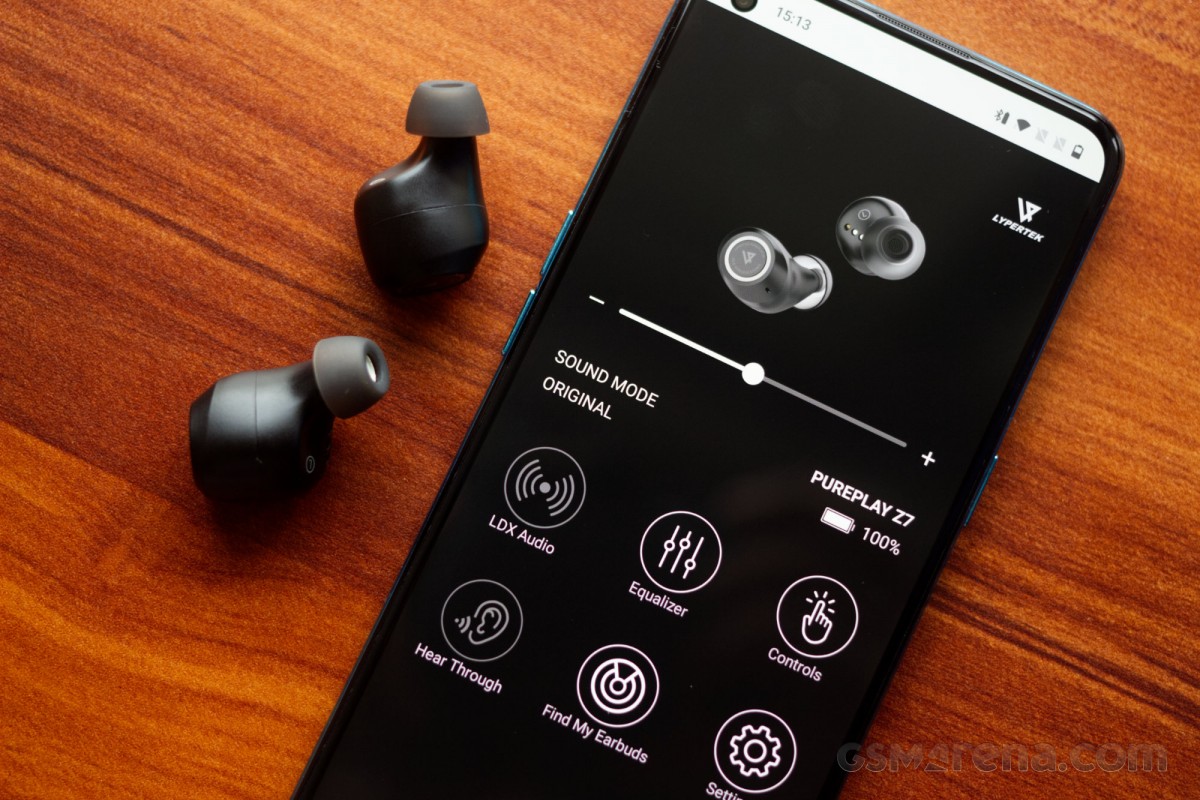 The LDX Audio mode doesn’t really do much. I noticed a slightly deeper bass and treble response but it’s so subtle it’s hard to tell if it’s on or off.

There is also a find my earbuds feature but it doesn’t actually make the earbuds beep. Rather, you can only see them on a map based on when they last interfaced with the app.

The Pureplay Z7 have a laidback, mellow sound that emphasizes the bass and mid-range with a dialed back treble response. It’s quite the antithesis from what you normally expect from balanced armature drivers and also very different from the sound signature of the much brighter and more balanced Pureplay Z3.

The bass response on the Z7 has a nice punch to it without getting all in your face. The low bass is boosted but still feels well-defined with pleasant warmth and thump. The mid and upper bass accentuate the warmth further, which introduces some muddiness to the sound. 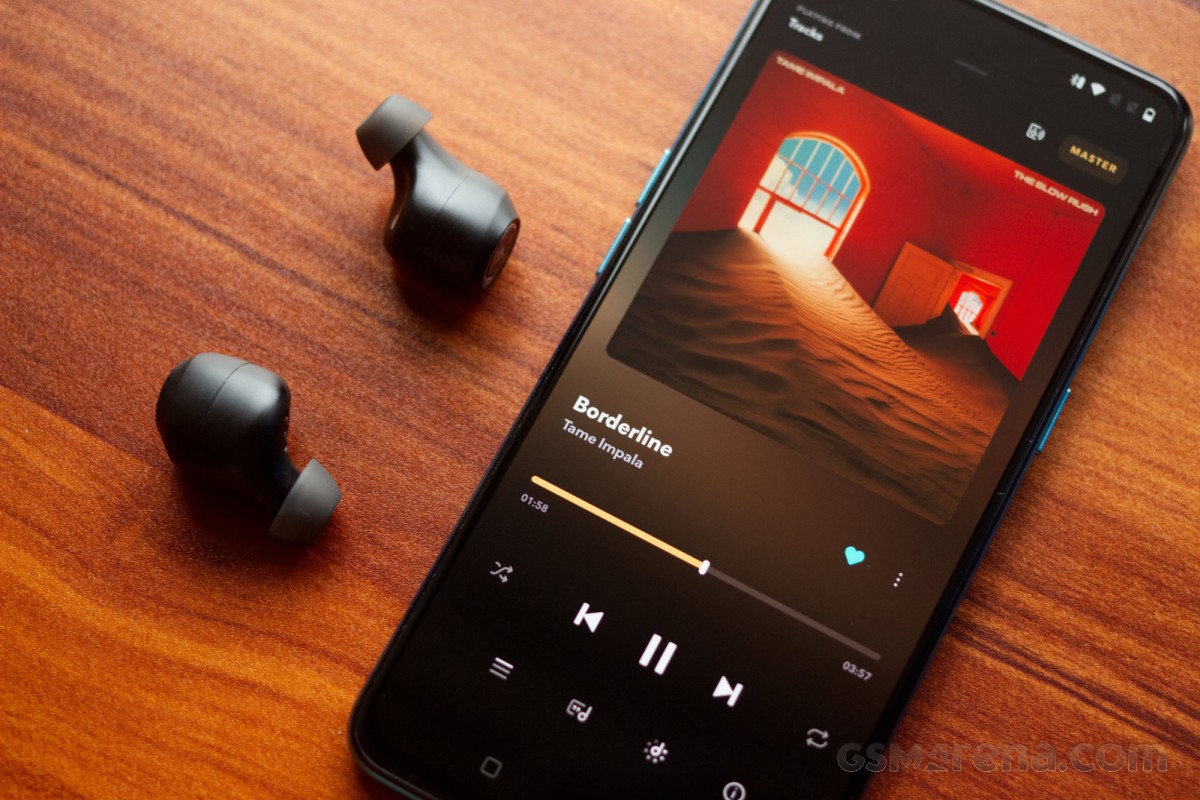 The mid-range seems to ride this wave of frequency boost as the lower and mid-mids are quite forward in the mix. There is a slight honk to the mid-range and as a result, male vocals sound slightly nasal and the percussion instruments sound similarly unnatural. But if you like your mid-range then you might not mind this much.

Past that, the frequency response sort of goes downhill. It seems Lypertek went a bit too far while trying to rein in the typical BA tonality and characteristics, especially since they also chopped off their tips, which should have made them unbearable. But the result of this is that the treble is now pushed quite far back into the mix.

The Pureplay Z7 have a fairly dark tonality. Treble detail is decent but volume is dialed far back, which makes the sound quite murky. You tend to get used to it after a while but switch back and forth between these and a more balanced pair of earbuds and the difference is night and day.

The overall mellow tonality of the Pureplay Z7 may be to some tastes, especially people who despite bright, shouty audio signatures. It makes for a smooth, relaxing sound that you can listen to for hours without much fatigue. However, it’s not the most balanced or neutral audio signature and those looking for such will definitely be disappointed.

In terms of technical performance, the level of detail in the sound is decent. However, the dialed back treble takes the edge off the sound and makes it softer and unfocused. Imaging performance is average, and the soundstage is unremarkable. One rather serious issue with the sound is the background noise. When the earbuds are powered on, the DAC/amp circuitry is engaged only when there is audio playing and powers down after some time of no audio. However, this circuitry adds a ton of very audible background noise to the system, which can be heard even when you’re in relatively noisy environments. It’s especially noticeable when it turns off after a while of no audio playing when things suddenly get quieter.

The Pureplay Z7 has below-average microphone performance. Voices sound quiet and indistinct. The earbuds also can’t deal well with background noise and it only makes the voices harder to hear.

The Pureplay Z7 have great latency performance for video. While watching videos, it was hard to make out any latency in the audio and the experience was nearly indistinguishable from using wired headsets.

The latency during gaming was more noticeable but still perfectly adequate for casual gaming. However, for competitive titles, it’s still recommended to use a wired headset with a built-in microphone.

The Pureplay Z7 had reliable connection performance during testing. Not once did the earbuds drop connection or did any sort of strange business that would warrant mentioning. They pretty much worked as they should.

The Pureplay Z7 do have a transparency mode that can be enabled through the app. However, it sounds very robotic and unnatural. Having said that, you may still want to use it because the passive isolation is really quite effective.

The Pureplay Z7 have a rated battery life of 10 hours when using the SBC codec. They also claim to last 2 hours after a 15-minute charge.

During my testing, I got 8 hours of continuous playback when testing with aptX Adaptive. While it’s a bit off the mark, 8 hours is still very impressive. Also, a 15-minute charge actually went on for the claimed 2 hours, which is also pretty good.

The case supports Qi wireless charging, along with the standard USB-C connection.

The Lypertek Pureplay Z7 are deeply unimpressive wireless earbuds at the $200 asking price. They have a lackluster feature set, with basic things like in-ear detection being unavailable. They also miss out on other stuff such as active noise-cancellation that one expects at this price point. 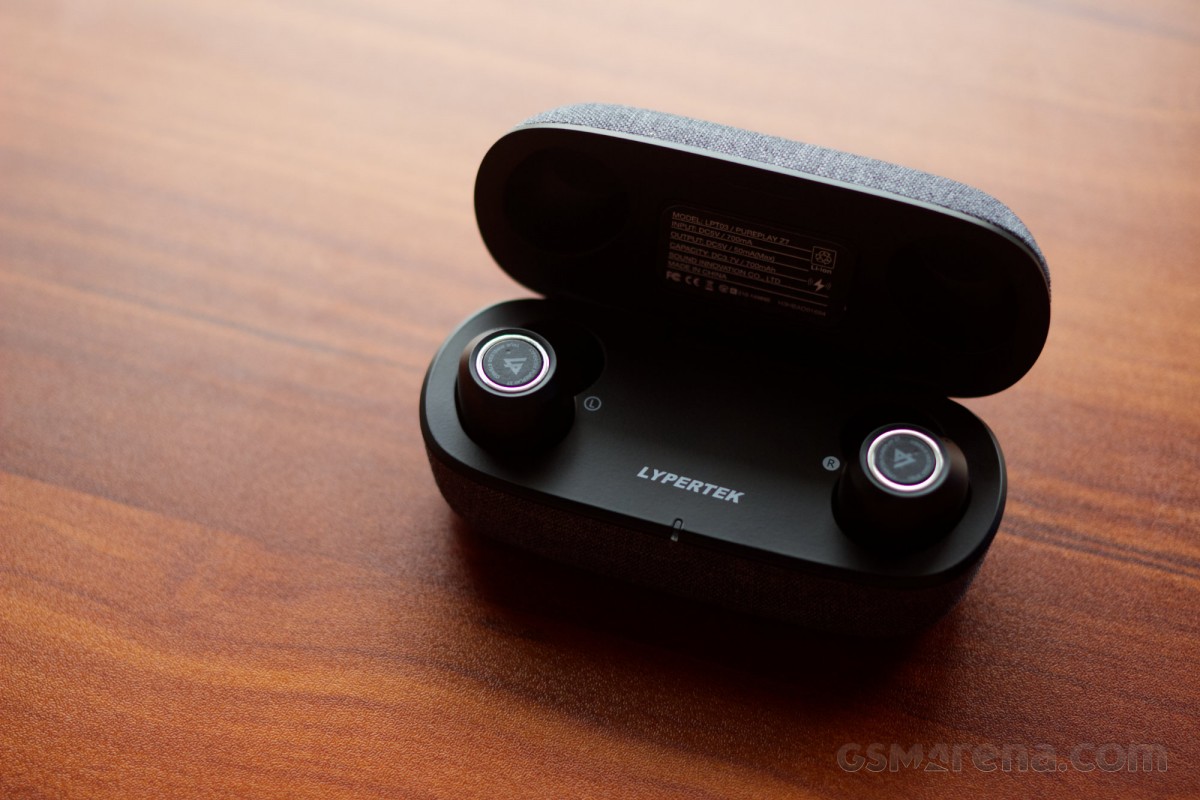 If the performance was streets ahead of the others, then some of the shortcomings could have been ignored. But the audio quality is only decent and plagued by issues such as the background noise. The microphone performance is also poor and they were also uncomfortable to wear while walking, which is just a deal-breaker for wireless earbuds.

There are also some undeniable quality control issues here, from the non-fitting foam tips, an extra pair of silicone tips that shouldn’t be there, to the aforementioned background noise issue.

The only good things about the Pureplay Z7 are the battery life, the latency performance, and the comfort when you’re just sitting. Those, however, are ancillary things and are not good enough to save these earbuds.

Overall, I’d recommend buyers stick with the much cheaper Pureplay Z3 as they are vastly superior in almost every way.