The Mi MIX lineup has revolutionized the smartphone market pushing the trend for bezel-less displays forward. When many companies started to pursue full-screen design, the MIX became just a regular smartphone. Xiaomi tried to bring a unique smartphone with the Mi MIX 3 and its sliding design and, then, put the MIX series on a slumber. The Chinese firm brought the MIX lineup back to life earlier this year with the Mi MIX Fold. Now, the lineup is returning at full with the next numbered smartphone, the Mi MIX 4. Once again, the lineup will play with the unusual by introducing an under-screen camera technology.

The new Mi MIX 4 will go official on August 10. The company is doing the best it can to build the hype for the upcoming release. Today, the company’s CEO Lei Jun took to Weibo to share some teasers for the device. The first teaser shows the device’s silhouette and, once again, confirms the device’s launch for August 10. The teaser also confirms Mix 4’s uninterrupted display. Xiaomi is achieving this using its own take on the under-display camera technology. 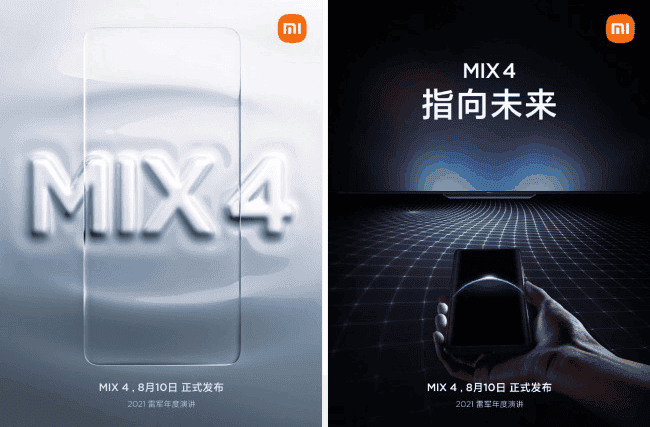 The first smartphone to reach the market with an under-screen camera was the ZTE Axon 20, the second is the Axon 30. Now, other companies will finally join the trend. Xiaomi has the Mi MIX 4 and Samsung will reveal its own under-display camera within the Galaxy Z Fold3. We expect this technology to become more and more relevant in the flagships of 2022.

Getting back to the point, the second official teaser shared by Lei Jun confirms ultra wideband coming with the Mi MIX 4. The poster is titled “new technology, new understanding” and reveals the MIX 4 pointed toward a TV. For those unaware, UWB is a more advanced version of Bluetooth which offers centimeter-level precision locating of smart devices.

In related news, the popular tipster Ice Universe has revealed an image that seems to offer a microscopic close-up of the Mi MIX 4 display. There’s a pixel arrangement between the Under-Display Camera are and the rest of the screen. Xiaomi is confident that its own solution is way more optimized than what Oppo and ZTE have to offer.

This is the screen pixel photo of Xiaomi MIX4, is currently the best UDC display solution. pic.twitter.com/AinO6bJIFt

As far as other specifications, the Mi MIX 4 is expected to offer a 120 Hz refresh rate and the Qualcomm Snapdragon 888 SoC under the hood. We also expect a large battery with at least 67W fast charging. The device should run MIUI 12.5 straight out of the box as MIUI 13 still needs polishment. The company also teased many colorways earlier today.

Why Plastic Lens Filters are the Hot Accessory You Need