Microsoft Surface Go 3 could go up for grabs in two highly appealing models including an Intel Pentium Gold, and an i3 processor. The tech behemoth is gearing up to host the Microsoft Surface event on September 22. The event will witness the debut of some new products including the Surface Pro Book, Microsoft Surface Duo 2, and the much-awaited Surface Go 3. The upcoming tablet has been floating around the rumor mill, revealing what it could offer in terms of specs and performance.

Aside from making multiple appearances online, the Surface Go 3 appeared on Geekbench last month. As expected, the Geekbench listing divulged some key details about the new tablet. It revealed the device is codenamed OEMAL and confirmed that it will be made available with the Surface Go 3 moniker. Two models were tested. One packed the Pentium Gold 6500Y, while the other had a Core i3-10100Y processor under the hood. These processors came with an Intel UHD Graphics 615, two processing cores with multithreading support.

A recently surfaced report from WinFuture has shed light on the upcoming device. This will be the third generation convertible PC from Microsoft. The Surface Go 3 will reportedly sport the same design as its predecessors. Furthermore, it is likely to come with a 10.5-inch display that offers an FHD resolution. Aside from that, the design uses magnesium alloy and features a fold-out stand. If earlier reports are anything to go by, the new Surface Go laptop will adopt a fanless design. In other words, the device will not pack any moving part under its hood. However, this could lead to issues related to overheating.

As mentioned earlier, the Surface Go 3 will be available in two models. One of these models will use the Pentium Gold 6500Y processor to keep the system powered up. Likewise, the other model will pack an Intel Core i3-10100Y SoC. Furthermore, the model with the Intel Pentium Gold processor will ship with 4GB of RAM, but it will still deliver a power-packed performance. The Geekbench listing hinted at a considerable 62 percent improvement in performance than its predecessor. It is worth mentioning here that the Microsoft Surface 2 packs the Pentium Gold 4425Y processor. 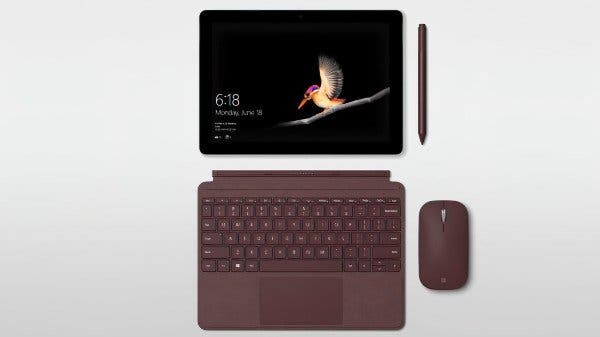 Furthermore, the new model showed a 48 percent improvement in Geekbench’s multi-core performance as compared to the previous generation model. The Surface Go 3 laptop with Core i3-10100Y SoC will be paired with 8GB of RAM. The results showed a noteworthy 4 percent spike in the single-core test and an 11 percent increase in the multi-core test on Geekbench. It is worth mentioning here that the Core i3-10100Y processor is part of the Amber Lake Y series of energy-saving chipsets. The Microsoft Surface hardware event will start at 11 AM ET on September 22.