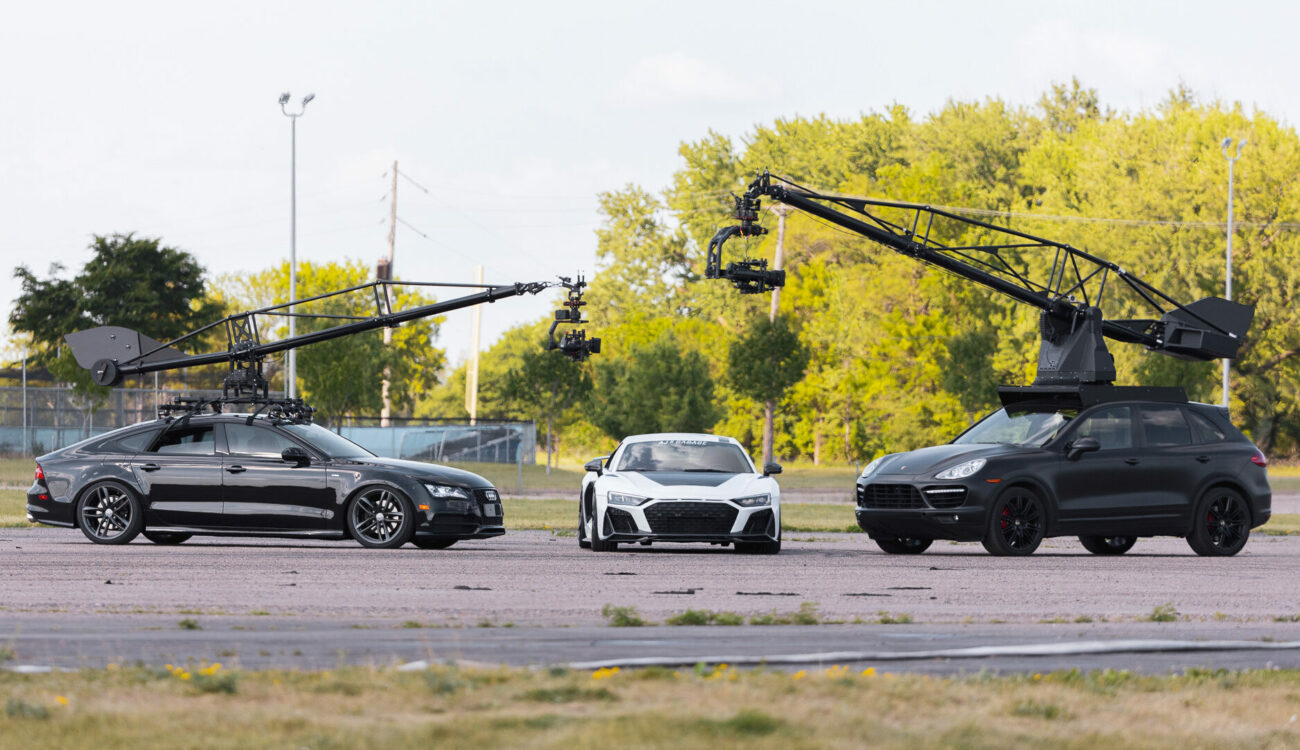 Everybody would love to use a Russian Arm, but only a few can afford it. MotoCrane, who started with their first universal automotive camera crane in 2017 (read our article here), released two new models: HYPER and RADICAL.

We have written about the predecessor, the ULTRA, coming out in 2017. The big news back then was that this automotive camera crane was universal and could fit most passenger cars. And even though 40,000$ is not a small sum of money, it’s still relatively affordable in contrast to other systems.

Instead of one successor MotoCrane presented two models aimed for two different markets: the RADICAL as an affordable, portable and universal automotive camera crane and the HYPER as a heavy-weight option for semi-permanent mounting and higher performance.
While the RADICAL supports a payload of up to 35lbs/16kg, the HYPER goes way beyond with a maximum payload of 120lbs/54kg.

The ULTRA crane had its own ACRO gimbal head. This time, instead of limiting the users to only one systems, the new MotoCrane RADICAL support now a wide range of existing gimbals, including the MoVi Pro, Newton S2, and the DJI Ronin 2. For using the ShotOver G1, ARRI SRH-3 or a heavier Ronin 2 build, MotoCrane recommends to additionally use the HEAVYLIFT, an upgrade kit reinforcing the loading capacity and increasing it up to 45lbs/20kg.

The RADICAL can swing its 12 feet long arm 360° in less than six seconds at vehicle speeds over 90mph/145kmh.
All parts can be stowed away in hard cases with each case under 70lbs fully loaded. This allows for international shoots without renting a whole russian arm on location or – worse – transporting a whole camera car from one country to another.

Similar to the ULTRA, the RADICAL can be mounted on a variety of cars using standard 1-1/2″ speedrail clamps and the optional MotoCrane SSG Kit (Speedrail Suction Grid).

On the other side, HYPER isn’t the most portable and affordable option, but it is a very capable one. Raising the payload to 120lbs and a industry-standard Mitchell Mount, it makes mounting stabilized heads like the MoVI XL, Shotover F1, Libra Head, GSS gimbals and more possible.

With two 48V 22Ah power banks and the CORTEX Motor Controller Unit as a counterweight, the swing axis generates up to 4000ft-lbs of torque (5423 Newtonmeters for our metric fellas) and swings the 14-foot arm with full payload in less than 5.5 seconds.

The POWERLINK is a hub for power, data and video which you mount inside the car. SDI and power passes through the HYPER to the camera rig so you avoid additional cables and tangling during arm swings.

It is by far not as mobile as the RADICAL is and has to be integrated semi-permanently to a vehicle, but this is necessary for a heavy-duty setup.

The new updated INS 2 Advanced Stabilization improves uneven terrain compensation on the Lift Axis. It’s included in the HYPER package and optional for the RADICAL.
Both systems are rated for IP65 and are made for various weather conditions.

Two new control units for controlling, configuring and monitoring the systems are available with the RADICAL and HYPER:

The COMMAND Console LITE is included with the RADICAL and is a compact single-joystick controller for operating the swing and lift axis of the systems.

The COMMAND Console PRO on the other hand is a big double-joystick controller with a 7.0″ touchscreen display in the middle and aims for more precise and advanced controls. It is machined from a single billet of 6061 aluminum and is designed in-house at MotoCrane. It is part of the HYPER package and optionally available for the RADICAL.

The RADICAL starts at $22,950, but goes up rather quickly if you add up all the optional components. You will need a 48V power source for operation, which is either MotoCrane official UPC ($3,860), a MotoBatt or a DIY solution with 4x12V batteries. Instead of the official rigging solution ($1,945) you are also able to build a DIY rig or use a modified tracking vehicle.

The HYPER is quite another price league. It costs $140,390, but includes the complete package. Just keep in mind that you have to modify your car in order to fit the HYPER.

Existing MotoCrane ULTRA users get a 11% discount on both models

You can preorder now for a 50% deposit, both systems will start to ship in September 2021.

Find more information about both models on their site: MotoCrane

Are you interested in such devices? Or do you even have some real-life experience with “Russian Arm” systems? Let us know in the comments!

Winners and losers of the week: Companies break records as China slows

LG's OLED R TV is not necessary, but it is a magical piece of tech