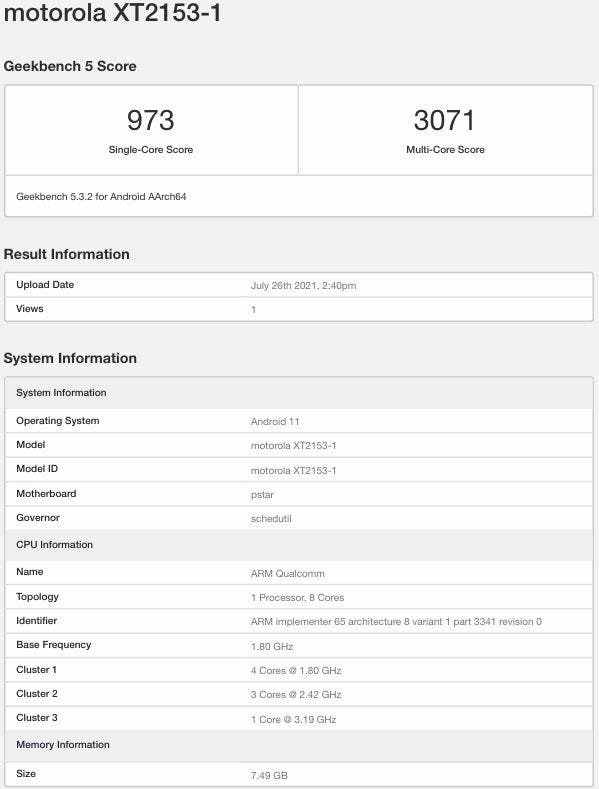 The Motorola Edge 20 and Edge 20 Pro will go official on August 5. Today, the Pro variant has passed by the Geekbench benchmark with model number XT2153-1. Unfortunately, the Motorola Edge 20 Pro will not be like the majority of flagships in the market. The company is betting on the Qualcomm Snapdragon 870 SoC. That’s a good chip, of course, but it’s not beyond other devices with Snapdragon 888 SoC. Maybe, the company will stick with a more affordable price tag to justify this chip’s choice. In addition to the SD870, the phone packs 8 GB of RAM and runs Android 11. The device scores 973 points in the single-core tests and 3,071 in the multi-core department.

According to leaks, the Motorola Edge 20 Pro will come with a 6.67-inch OLED display with a Full HD+ resolution. We’re expecting at least 90 Hz of refresh rate. Furthermore, the device is said to have variants with up to 12 GB of RAM. It will come with a 4,230 mAh battery that charges via a USB-C port with 33W fast-charging support. The rumors also suggest that the smartphone will come with a triple-camera setup on the back. The primary sensor will be a 108 MP primary camera. The secondary module probably is an ultrawide snapper. At this point, it’s hard to determine the purpose of the third camera.

In related news, the Edge 20 variant has passed on the Geekbench database earlier today. The vanilla is a premium mid-range smartphone with Qualcomm Snapdragon 778G SoC. It runs with Android 11 which is hardly a surprise at this point. The device comes with a 4,000mAh battery and we expect it to also come with 33 W fast-charging. Unless that Motorola is planning to provide a slower charging to make the Edge 20 Pro more appealing with its 33W fast-charging.

The devices will hit China in August 5, but we expect Motorola to expand availability throughout the rest of the year.

Inside My Camera Bag | Erika Tanith