Netflix Gaming debuts in Poland, but there’s a catch


Netflix is currently one of the strongest streaming platforms and is behind some of the most successful movies and shows of the current times. As a visionary company, it is already moving into the next big thing – Game Streaming. It’s an inevitable fact that games will eventually become something that we’ll be able to play with just an internet connection and a supported device. Netflix is giving the first steps to achieve this with Netflix Gaming. 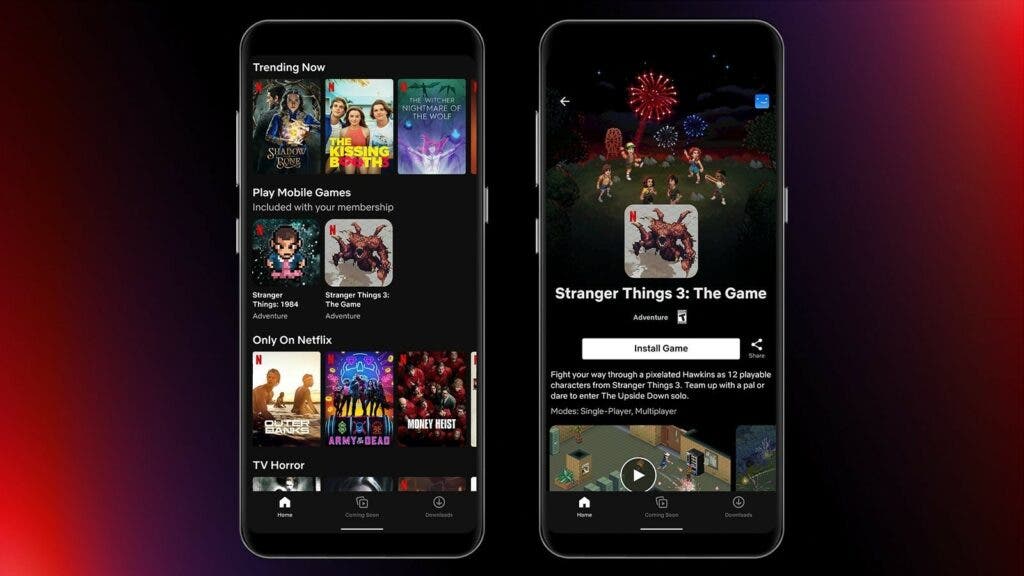 Back in the last month, the US-based company revealed that it will begin with mobile games first. However, it may expand its business with AAA titles in the future. Today, Netflix Game made its debut in Poland with two Stranger Things mobile games. That’s convenient since Stranger Things is one of the company’s most popular original shows. We have to say that Netflix Gaming has arrived sooner than expected. Even though at its current state, it won’t be relevant for everyone.

Netflix Gaming is here, but there’s a catch

For now, Netflix Gaming will be exclusive to Android and has only two games – Stranger Things: 1984 and Stranger Things 3. The games will appear under a new tab in the Netflix mobile app as seen in the image above. From the screenshot attached to the announcement, users will have to install these games to play and not stream them. So, apparently, at least for now, the platform is not really a game streaming service. Are you disappointed? It gets even worse.

When you tap on the install button, it opens up the Google Play Store within the app. Once the download is complete, you will be able to play the game within the Netflix app only as the games won’t appear in your app drawer. At the current state, this seems to be a partnership between Google Play and Netflix, where the first provides the game and the second serves as a Game Launcher or something that allows you to play paid games with your Netflix subscription.

Today members in Poland can try Netflix mobile gaming on Android with two games, Stranger Things: 1984 and Stranger Things 3. It’s very, very early days and we’ve got a lot of work to do in the months ahead, but this is the first step. https://t.co/yOl44PGY0r

Netflix is aware that this implementation can disappoint some users waiting for something “bigger”. The streamer service said, “It’s very, very early days and we’ve got a lot of work to do in the months ahead,”. Currently, the platform is offering a way to play games tied to its shows at no extra price. The Stranger Things 3 game, for example, is also available on the Nintendo Switch for $9.99. Netflix Subscribers will be able to play the game for free with no ads and no in-app purchases.

There’s a big potential in cloud gaming and companies like Microsoft, Google, NVIDIA, Amazon, and now, Netflix, are running to consolidate their name in this upcoming segment.

Inside My Camera Bag | Gabriele Galimberti