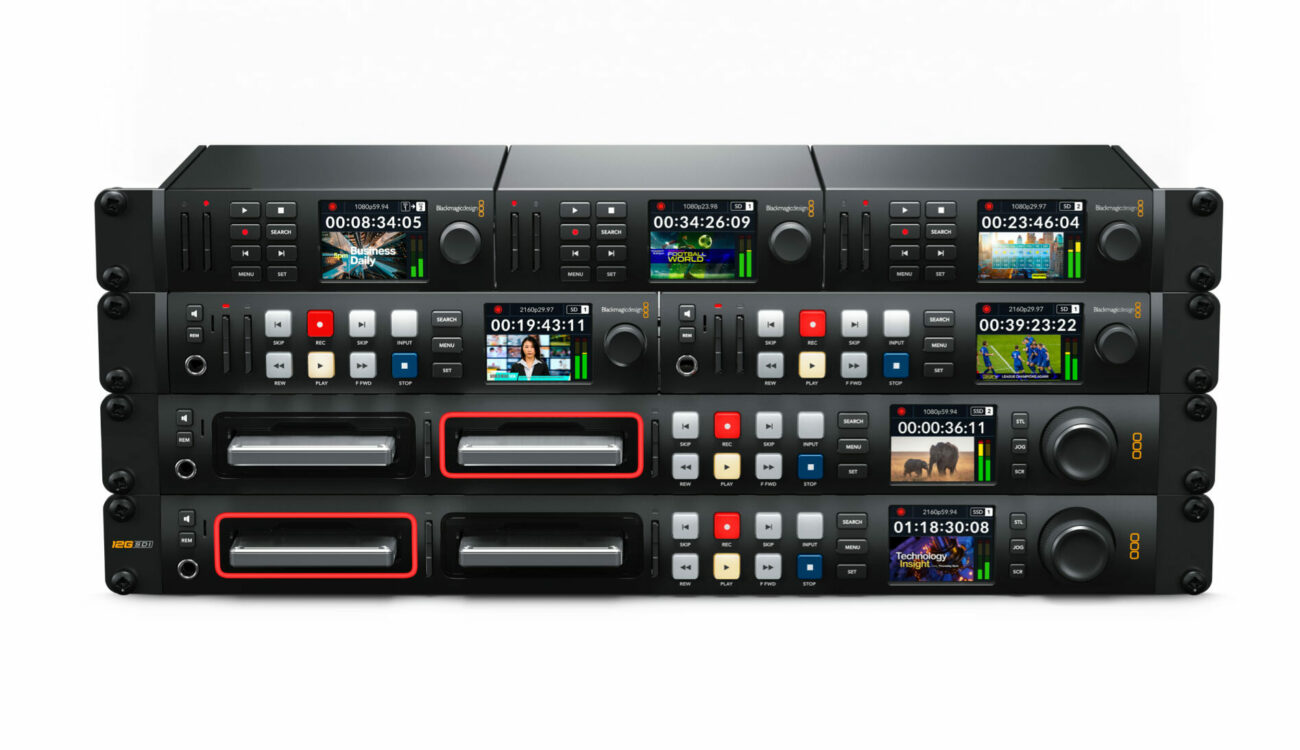 Blackmagic Design held their live stream a few hours ago and didn’t release any information about new products beforehand, as it is usual for Blackmagic. As the live stream started, CEO Grant Petty gave it right away: a whole range of products and a camera would be introduced.

If you want to check out what new camera gear Blackmagic Design introduced, click to read our separate article here.

The Blackmagic Web Presenter was really popular in the last year with Covid-19 restricting all of our movements and forcing us into live streaming more than we probably wanted. It now gets a bigger 4K capable brother, the Web Presenter 4K. It can stream in Full HD and UHD in up to 60fps. It has the same body as the previous model and shares almost the identical ports. It is able to downconvert from UHD to FullHD for an HD stream, but it also can do the opposite, which could be practical when not all outputs are identical. It’s available starting today for $695.

The new HyperDeck Studio HD Mini has the same size as the old Studio Mini. It loses the 6G-SDI and therefore UHD and high-framerate options, but is quite a bit cheaper than the existing Mini. On top of the existing reference in it now features a timecode generator.

A new USB C port enables you to record on external storage, like SSDs, but also more complex setups, because the device supports hubs and multi-disk arrays. Despite this the dual card slot stays in and makes hotswapping SD cards possible. It can record in ProRes, DNxHD and H.264. It also can record interlaced (1080i) signal, so postprocessing interlaced video feeds is possible. It’s available starting today for $495.

Even though the Studio HD Mini sounds similar, Grant Petty called the HyperDeck Studio HD Plus the actual successor to the Studio Mini. It is slightly bigger than the previous model (1/2 rack width). It features 6G-SDI and records ProRes and DNxHD in UHD. It features a new H.264 SDI format, which is 10-bit 4:2:2 instead of the normal 8-bit 4:2:0. It is recommended for archiving files, because even though you retain a high bit depth the files are kept small.

On top of the SDI In and Loop Out it has HDMI In and Out. The bigger size allows for more ports like the new RS422 remote port, enabling daisy-chaining multiple HyperDecks and controlling all from just one unit. If you connect the HyperDeck Studio HD Plus to a computer via the USB C port, you can use the video stream as a webcam input.

A highly requested feature was a 6,3mm headphone socket on the front which they included, but Blackmagic Design also built in a speaker for reference audio.

The HyperDeck Studio HD Plus will retain the price of the Studio HD mini, so $695. It is available starting today.

The old HyperDeck Studio and Studio Pro models are getting replaced with one big unit: the HyperDeck Studio HD Pro. It has a better industrial design and is very similar to the previously announced HyperDeck Studio HD Plus both internally and port-wise. It adds a XLR input for timecode in and out. Compared to the old models it features both two SSD slots and a dual SD card input, so 4 media slots in total. The input jog wheel is improved and features force feedback for better menu interaction. It starts selling today for $995.

The new top-of-the-line model will be the HyperDeck Studio 4K Pro. It has the same connectors as the Studio HD Pro, but has 12G-SDI in and outputs. Two AC power supplies and one DC XLR power input allow for redundant power. It supports UHD in both ProRes and DNxHD. SD and HD can be recorded in H.264, but when recording UHD the HyperDeck Studio 4K Pro will switch to H.265. With a future update the unit will be able to play back computer-rendered H.264 and H.265 files. For even faster data transfer, it has a 10G-Ethernet port built-in. It is available today for $1,495.

Find out more about all the newly released products on Blackmagics site: Blackmagic Design

Do you use a HyperDeck already? What do you think about the new lineup? Let us know in the comments.

Micromax IN 2b announced: 6.52" screen, stock Android, and big battery