These days, most of us have a security camera for our homes because it’s an effective way to keep an eye on things and protect where we live. While we may spend the majority of our time at home, there’s another place where we also spend much of our time — our vehicle.

Having a camera there is just as important. On the road you are subject to other people far more often, and if you get into an accident, being found at fault can be a pricey affair. That’s why having a dash camera is helpful.

Fortunately, our friends over at Nextbase were kind enough to send out its top-of-the-line 622GW front and rear dash cams for us to share with you.

Installing the Nextbase 622GW went smoothly. Inside of the box you’re provided with all the mounts that are required. You have the option of mounting the front-facing camera by either using the 3M sticky mount or the suction cup. The 622GW connects to these mounts via a proprietary magnetic connector on the front of the camera body.

This magnetic connection is extremely strong, the few times I removed it from the mount required some strenuous pulling on my part. Basically, know that once it is in place the camera isn’t going to fall off of the mount. 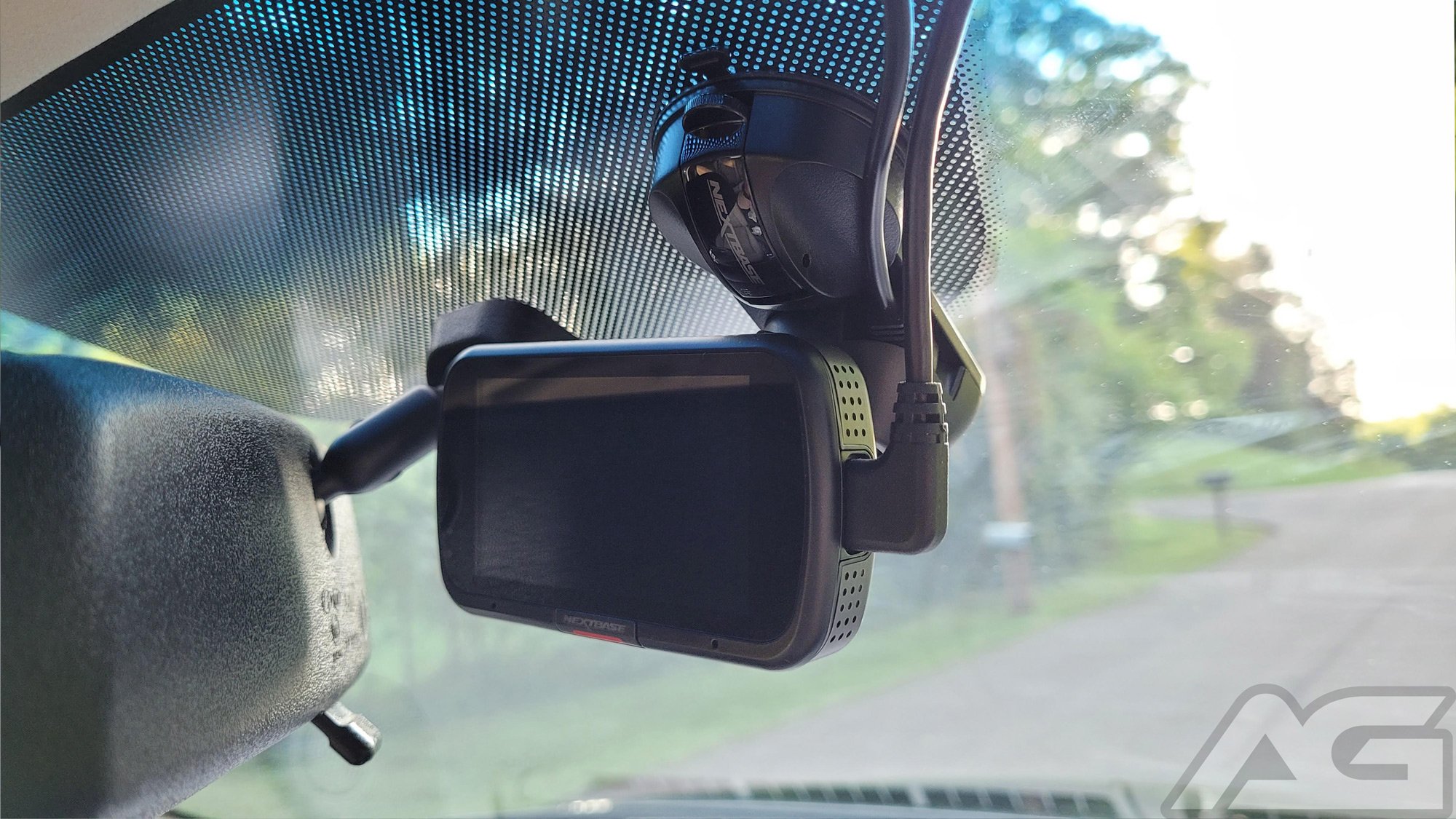 I went the suction cup route with my install since it would allow me to reposition the camera as much as I liked. Ultimately, I stuck it up behind the rear-view mirror to keep it out of the way.

Installing it so high up meant running the power cable to the cigarette lighter and the cable for the rear camera around the top of the car and down the weather seals of the door. I had to run the cable through the glove compartment but it did not require any additional hardware or tape, It’s not pretty, but it works and we rarely open that anyways. 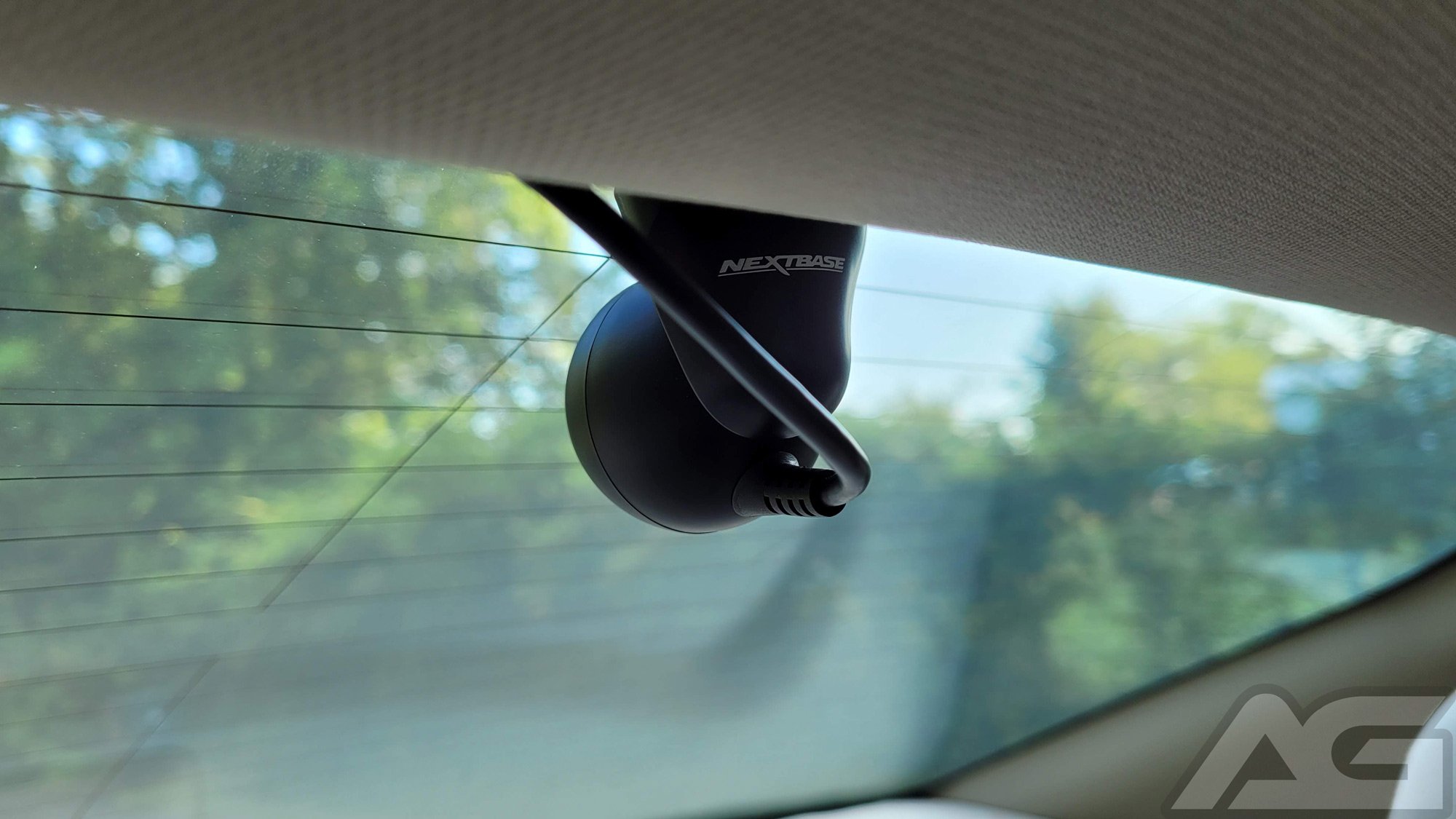 For installing the rear-facing camera I had to use the 3M mount and the cable from the front-facing camera was plenty long enough to run semi-hidden through the weather seals of the front and back doors. You could also run it through the top roof panel if you’re so inclined but I didn’t feel like disassembling it at the time.

Once you have both cameras installed, you can easily adjust the viewing angle of the 622GW. In my case, I used the live view in the app to make things even easier. 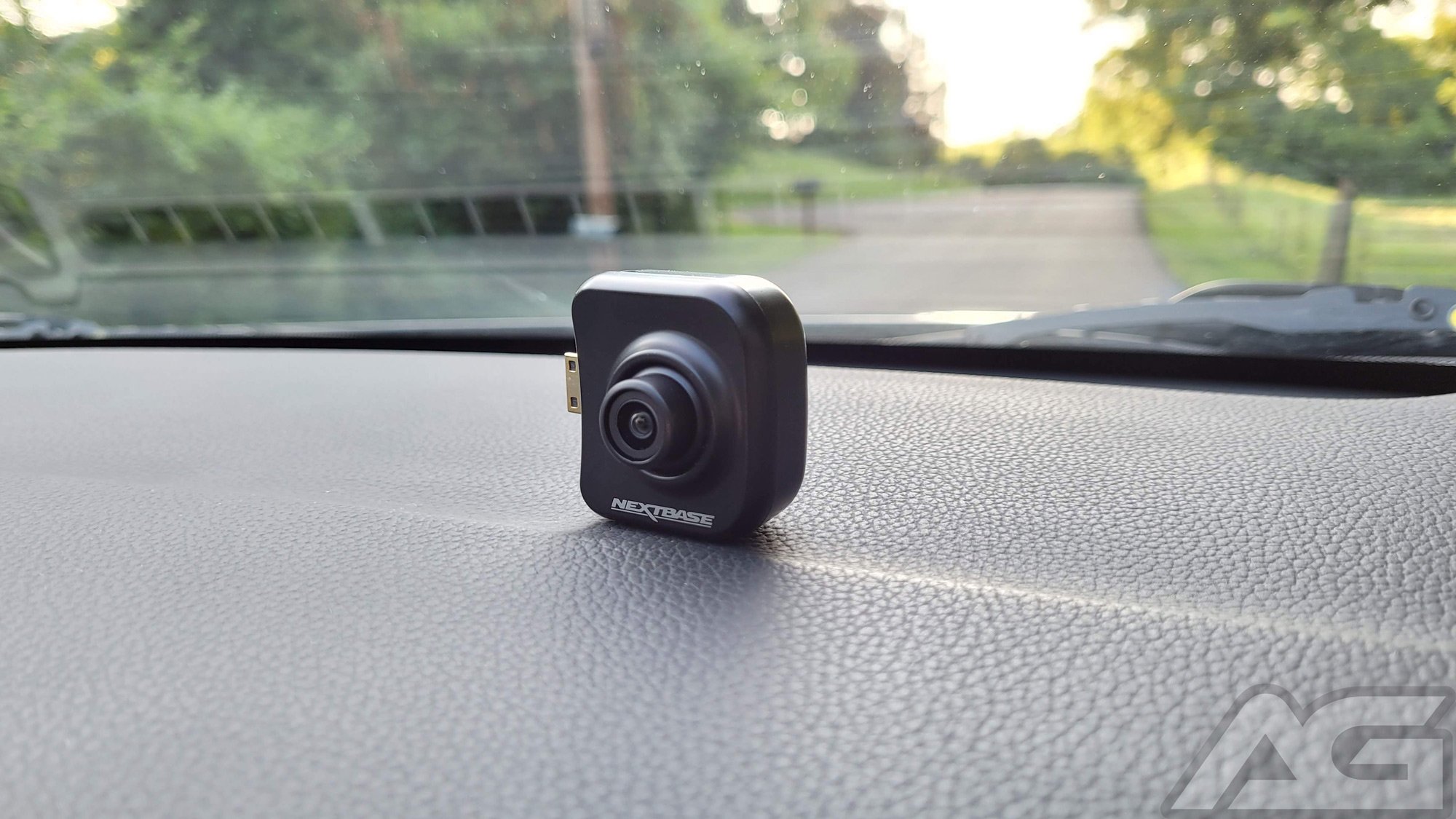 Besides the front and rear cameras that come bundled together, Nextbase also sent along the cabin camera. I didn’t spend much time with this installed because there is only one port on the main dash cam to add an additional camera. That means choosing between the rearview or the cabin camera.

I went with the rearview camera as I found it more important; there is also an option to buy the cabin camera if you prefer that.

It’s a great way for parents to get a glimpse of what’s going on in the backseat but it won’t give you a good view out the rear of your vehicle.

The Nextbase 622GW is a premium dash cam featuring up to 4K 30fps recording with a sharp clear image. This high resolution makes it easier for you to zoom in for details, such as checking the license plate of other drivers. There is even image stabilization to help make details even clearer. 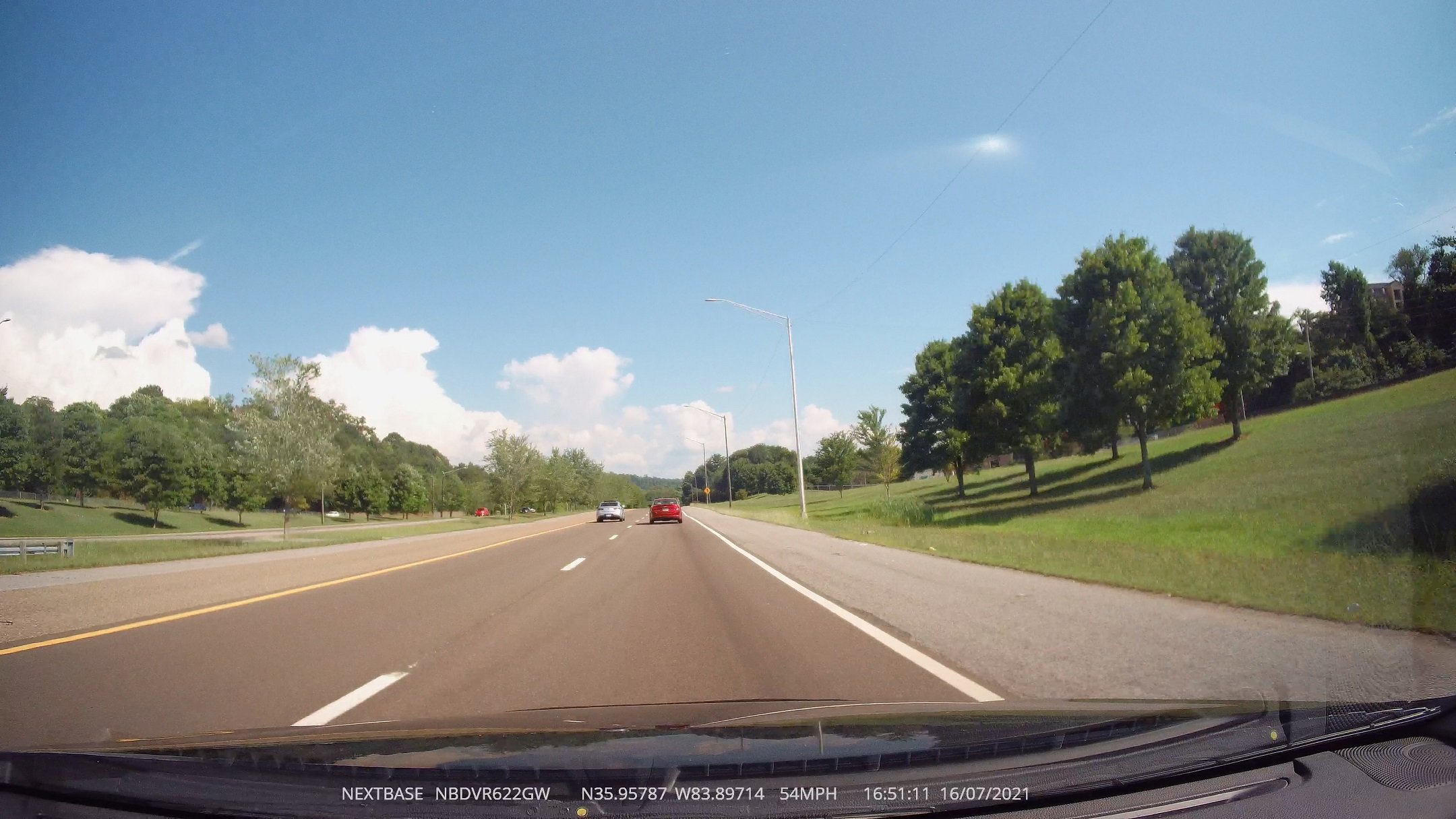 Furthermore, the enhanced night vision and extreme weather modes will ensure that even if you’re caught in a storm or driving late at night, you’ll be able to make out your surroundings in the video.

In my experience, I found this perfect for reading plates directly in front of me when stopped but it can be more challenging if on the move or if the car is in the lane next to you.

Besides recording in 4K, the Nextbase 622GW also includes 1440p (60fps), 1080p (120fps), and slow-motion modes capture for the front-facing camera. The rear-facing camera is limited to only 1080p though; be aware that it’ll be lower resolution with no slow motion.

Just a note on the microSD card – the Nextbase 622GW requires a card that can sustain write speeds of 60MB/s. For this review, I was sent one of Nextbase’s own U3 microSD cards which provides ultra-fast write speeds. I was able to keep up with saving 4K video from the front camera and 1080p from the rear.

Along with recording footage at UHD and HD resolutions, the Nextbase 622GW comes with some smart features such as what3words to help pinpoint your location even when you’re offline. It also has support for Alexa which allows you to do a host of actions such as snapping photos, starting/stopping recording, turning the display on/off, and more.

The Nextbase 622GW uses two different apps, one is for your phone and the other is for your computer. Most of the time you’ll probably use the phone app to view videos and change the settings on the camera.

Within the app, you’ll also be able to set up what3words, Alexa, enable parking mode, reverse camera view, and extreme weather modes. Additionally, you can control the resolution of your recordings and whether or not it will imprint your speed, GPS location, use image stabilization, and set your video recording length.

There is also a way to see a live feed from the cameras or review footage, but only if you have it recording at lower resolutions. In my case, since I was using 4K I had to turn on the dual recording mode, otherwise, you can only view the 4K files via your PC.

The PC app gives you an entire dashboard view when reviewing and editing footage taken with the camera. You’ll be able to see your GPS location and a view on the map showing what road you’re on and your route. There is also a section to show your speed, average speed, and distance traveled in the clip. 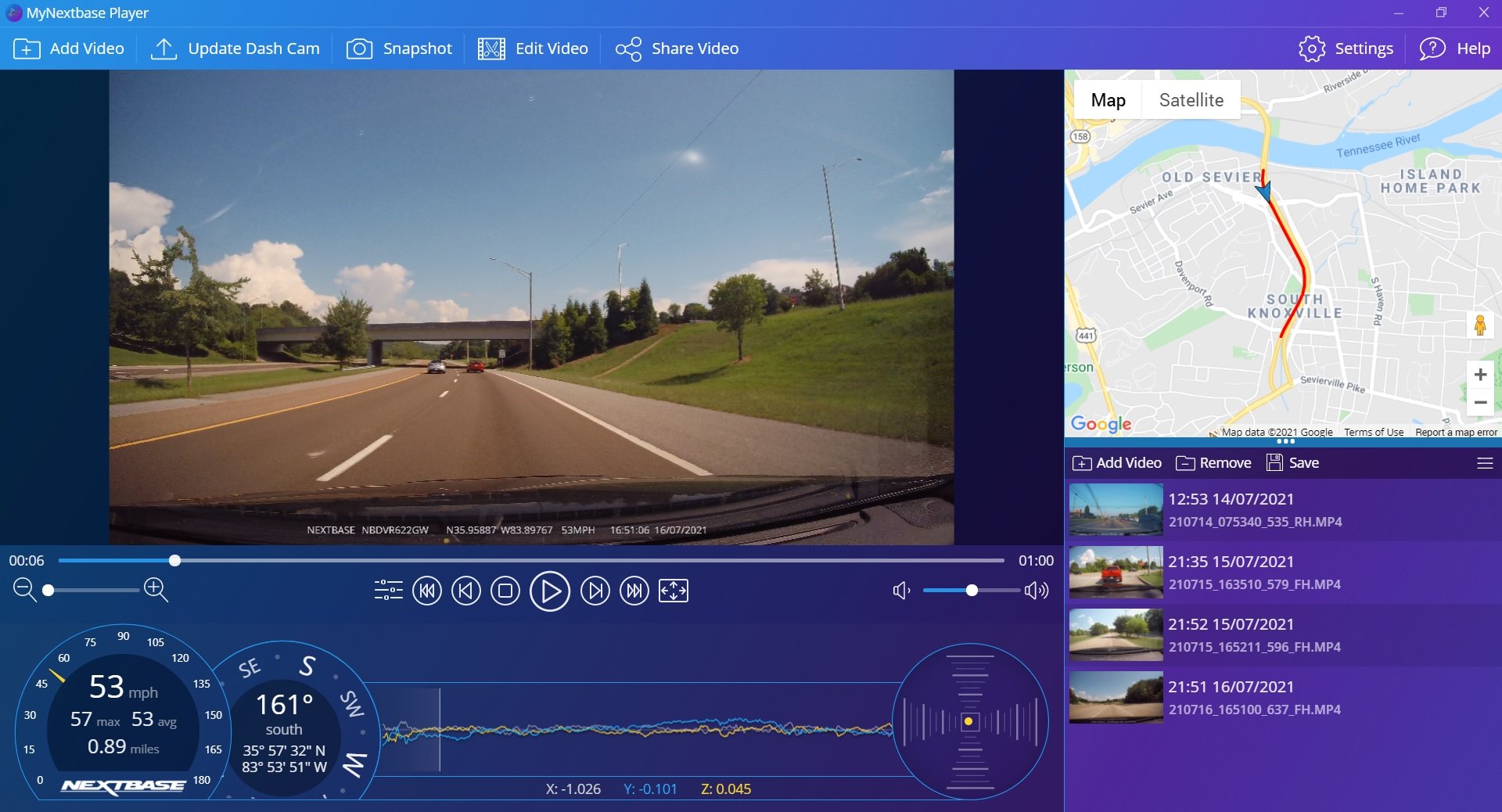 Most importantly, there is a zoom button and you can adjust the brightness making sure you get a clear view of important information like license plate numbers.

Overall, I was very impressed with both apps, especially the PC app for reviewing footage. My only complaint was having to manually add clips from the SD card to the app because of how long it took for them to parse.

The Nextbase 622GW is not a cheap camera, the set featuring the front and rear-view cameras retails for $500 on Amazon. However, for that price, you get a sharp picture, smart features, and a pair of good apps to go along with the cameras.

There are certainly cheaper alternatives out there, but I had no major complaints with the Nextbase 622GW and besides the price, I wouldn’t hesitate to recommend it to anyone.

At the time of writing, the package is even selling for a lower than usual $420 price on Amazon, which makes it even more appealing to pick up with a discount. Alternatively, you can purchase only the front-facing Nextbase 622GW dash cam on sale for $319 from the Nextbase website.