Home » Blog » Nothing Ear (1) vs Pixel Buds A Series
Mobile

Nothing Ear (1) vs Pixel Buds A Series 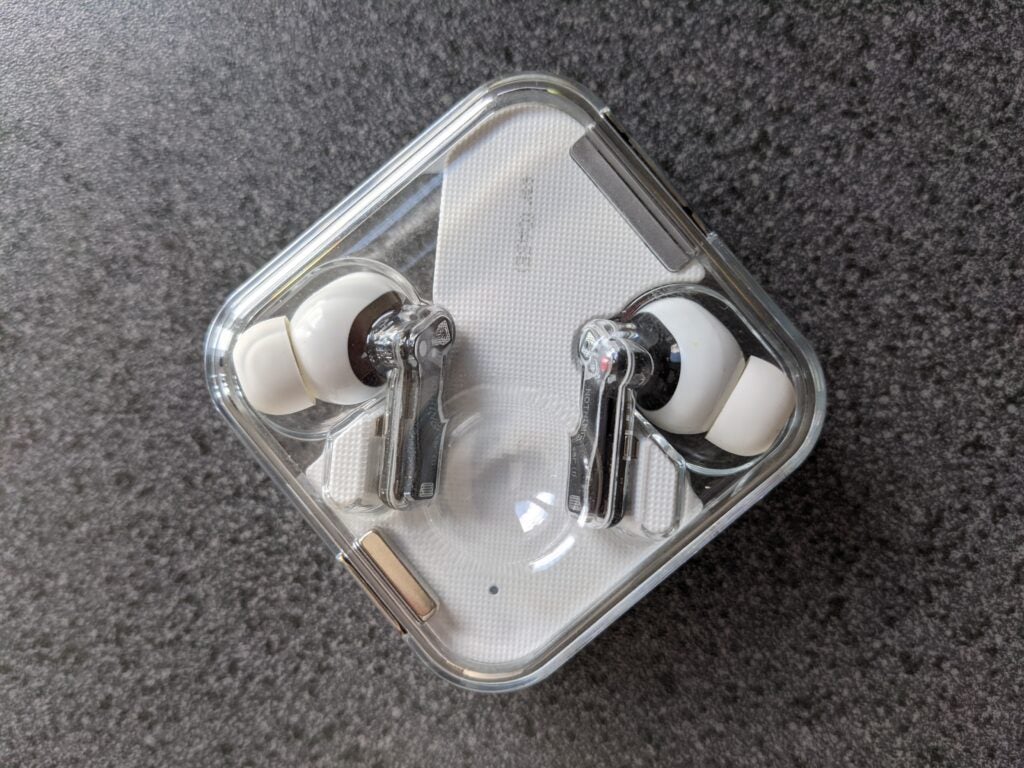 Nothing has unveiled its first earbuds in the Ear (1). But how do they compare against Google’s own Pixel Buds A Series?

The Nothing Ear (1) earbuds are priced affordably with a promise to deliver something unique in the true wireless market.

The Google Pixel Buds A Series strive to be the AirPods for Pixel owners, and other Android users in general.

Read on to find out how these wireless earphones compare and the differences in price, design, features and sound quality.

The Nothing Ear (1) have a price of £99 / $99 / €99, which is at the cheaper end of the scale. They’re not widely available though, as Nothing is selling its earbuds only through Selfridges in the UK.

The Pixel Buds A Series also sits at £99 and fetch a similar price in other countries too. So in terms of their price, it’s a draw. What aspects do these true wireless pairs differ in, then?

The Nothing Ear (1) has a transparent design along the stem, with silicon ear tips along with white colour at the top to give the device a little flair. The charging case is also mostly transparent, adding to their futuristic and distinctive style. It also means you can see the internals of the earbud itself if you’re curious as to what makes up an earphone.

Moving to the Pixel Buds, they are a slightly more conventional-looking pair of earphones. Looking very similar to the Pixel Buds 2 from 2020, they have the same matte finish and ear tips to keep them falling from out.

The charging case is also has more of the same. However, there are more colour options this time around that weren’t available last time out.

It’s very much personal preference which design you prefer, the Ear (1) is clearly going for a more ‘techy’ design, almost reminiscent of transparent gaming controllers from the ’90s and early noughties. If you want a classic and sleek design it seems that Google has your back.

What features do they have?

Feature-wise, the Ear (1) packs an impressive punch. They include ANC, transparency mode, gesture controls and Fast Pair technology, which is also present in the Pixel Buds A Series.

The earphones have 11.6mm drivers, with three microphones in each earbud to aid call quality. It should also help boost sounds when the earbuds are in Transparency Mode.

Controlling media playback is done with gesture-enabled systems, with the option to swipe up and down to adjust volume and the ability to customise the tap gestures within the Nothing app. We found control over the earbuds to be simple and responsive.

The Nothing app is also worth your time as it allows for adjustment of ANC levels, EQ, and customisation of controls to fit your needs.

So the benefit here is you’ll be able to have complete control of the ANC and EQ levels, so each listening experience should be tailored for you.

Moving to the Pixel Buds A Series, they sport custom 12mm drivers that go along with the dual-beam forming microphones.

The Buds also feature in-ear detection, similar to Apple’s AirPod Pro, although in the Buds one of the sensors have been removed since their last-generation counterparts.

So far, the main attraction for these earphones has been the inclusion of touch controls on the ear pad, which can be used to activate Google Assistant, or you can just say “Hey Google” and have Assistant respond to you while wearing the Buds.

However, if you want to turn up the volume or skip some songs, you will either have to grab your phone manually or use Google Assistant, as Google, unfortunately, removed the ability to use the touchpad to control media playback.

And for anyone looking for good noise-cancelling earphones these might not be the ones for you, as there is no ANC feature in the Pixel Buds A Series.

The alternative Google has instead presented is Adaptive Sound, which will automatically adjust playback volume based on your surroundings and the noises around you.

In these circumstances, the Nothing earbuds would get the vote in terms of the number of features. If you’re after noise cancellation at a low price, they offer that over the Pixel Buds A Series, but the Google earbuds are integrated well within the Android ecosystem, so that’s something to consider, too.

The battery life of wireless earbuds is something you want to be aware of. Nothing’s earbuds are rated at 5.7 hours of media playback with the ANC turned off, and four hours with ANC included.

Include the case and that brings this up to 34 hours of audio with ANC turned off, to an impressive 24 hours with ANC enabled.

And just to show off, along with USB-C charging, the Nothing Ear (1) also offers Qi wireless charging, so you can charge up your earphones without any pesky cables.

And looking at what Google has to offer, it rates the Pixel Buds A Series for about five hours on a single charge, with a total of 24 when you include the charging case.

And, unfortunately, there is no option for wireless Qi charging with the Buds, so you will have to make do with standard USB-C charging.

However, some clever tech built-in will get you three hours of listening time with just a 15-minute charge. Again, that would make it a win for the Nothing earbuds here, as they offer a bit more battery, though that does drop below the Google Buds when ANC is activated.

In terms of audio quality, we said in our review of Nothing ear (1) that they boasted, “remarkable precision that it lends to voices and instruments” and “the sound quality was well-realised across the spectrum from the treble down, though they are balanced towards favouring a strong bass sound”.

However, the Pixel Buds A Series is also impressive and for the price, giving instruments and vocals clear definition and a smooth presentation.

Yet, the sounds are also not particularly distinctive, with our review claiming, “Despite Google’s claims about how powerful the 12mm dynamic drivers are, there’s no pointed sense of attack.” The Pixel Buds A-Series are a little safe in terms of how they come across, but a fine listen nonetheless.

The Google Pixel Buds A Series are a decent pair of earbuds and for the price, they do offer good audio with a sleek design, but they don’t feature ANC and don’t have as long a battery life.

The Nothing Ear (1) earphones have clear and distinctive audio and feature impressive battery life. And little features like Qi charging and the ability to toggle ANC gives them an edge.

Intel's 3DAT A.I. is the 'Holy Grail' of Training Tech