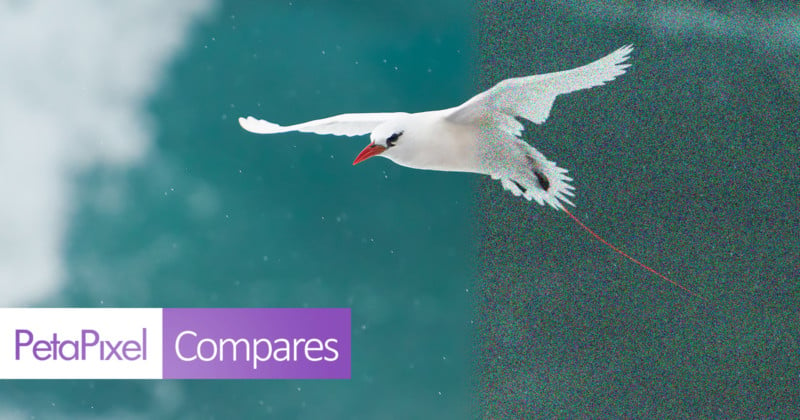 ON1, an established photography software company located in Oregon, recently released its new noise reduction application called NoNoise AI. As a longtime user of Topaz Labs DeNoise AI, it only made sense to pit these two machine-learning-based noise reduction programs against each other and see which one comes out on top.

Before diving into a comparison of ON1 NoNoise AI and Topaz Labs DeNoise AI, there are a couple of things to point out. First is a list of visible negative effects from photographing with high ISOs so that we may more closely examine the results below.

While these two applications primarily target “digital grain” type noise, there are other degradations happening to an image simultaneously as the noise gets worse and, to an extent, I noticed both software applications attempting to fix a few of these as well, so I thought it was worth mentioning.

Another thing to point out is what the “AI” in NoNoise AI or DeNoise AI is doing. The programs are not simply finding hidden details already existing “behind” the noise and enhancing them. Simplified, the software is reading your photo, comparing it to its massive data library complied from machine learning to recognize what something should look like, and then replaces the original artifacts with clean textures and details based on its photo-driven libraries.

In practice, you don’t really think about this and to the end-user, it does just look like original details being cleaned up and brought out because it works so well (most of the time). However, organizations like the National Audubon Society, which just hosted the 2021 Photography Awards Contest, recognize the difference and specifically did not allow “AI and machine-learning-based software used for upscaling, sharpening and significant noise reduction.” In a sense, it can be argued that the final edited images from AI noise reduction software are composites.

Moving into the comparison, I want to first discuss the similarities and differences as far as the layout, tools, and file handling workflow goes for each application.

Opening each program, both have a similar layout in default settings. The photo being processed is oriented on the lefthand side, the main toolbar panel is on the right, and there are more information and tools on the top and bottom.

As far as looks go, ON1 NoNoise AI is by far superior with its minimal use of color. Topaz Denoise AI on the other hand tries its best to skew your color perception by maintaining a blue color palette throughout the program — a big no-no for the editing process.

Both allow color changes to the preview background color but, for the most part, this is never seen unless your zoom is backed out all the way and it also doesn’t affect the panels surrounding the photo. ON1 goes a step further to provide a customizable accent color, but this makes a minimal difference to anything.

Looking at the main tool panels, we see a general similarity in that there are tools for noise reduction and tools for sharpening.

Topaz Labs has an additional AI Model section that has four options: Standard, Clear, Low Light, Severe Noise. Standard would be for your regular photos with low to moderate noise. Clear uses an older Topaz Labs noise reduction engine and does not rely on AI as much, and this mode is good for times when you see a lot of inconsistent noise reduction and artifacting introduced by the AI models. Low Light and Severe Noise kind of sound like they’d be targeting the same thing, however, if your final photo is meant to have a lot of dark spaces it might be best with Low Light.

While Topaz Labs has one slider for noise reduction and one slider for sharpness at the heart of its program, ON1 has three sliders for both and allows for more refinement, which is greatly appreciated. It’s more hands-on, but also more time-consuming. Both have Auto toggles which are handy to get a suggestion on where to start with the sliders. From my long experience with Topaz Labs, I know that sometimes the Auto suggestion is completely off base, but it usually will speed up the process.

One of the more interesting sliders that exists in ON1 NoNoise AI is the color tool (and to be sure, no, this doesn’t act like the Color Noise Reduction tool in Topaz Labs). I mentioned earlier in my list of negative effects of high ISO shooting that color-shifting becomes a problem. Color noise can give off a shift in the blacks and other colors get all faded and skewed. This nice tool works to take care of that by offsetting these issues. Sometimes in a lower ISO photo, the tool isn’t doing any favors when fully active, but for really noisy images it makes a huge difference.

The suggested workflow for each program differs in that ON1 NoNoise AI prefers to work off of original RAW files whereas Topaz Labs DeNoise AI is mostly set up to take processed files. Topaz Labs just released version 3.2 which supposedly includes improvements to the RAW color processing, however from what I could see comparing v3.1 and v3.2 was a lens profile correction and that’s all. As for ON1, when you try to import a non-RAW file, there’s a pop-up message that says, “results from non-RAW photos are considered beta quality and will improve soon.”

Topaz Labs easily wins here, as it is more flexible and leverages programs like Capture One to do a far better job at the RAW processing. ON1’s logic is that noise gets introduced during the demosaicing stage of RAW processing and therefore they can get to it at the source. What’s lost, though, is the incredible color processing and RAW-level adjustments from programs like Capture One that aren’t the same at all after ON1 outputs a converted DNG.

One other thing to mention as it relates to workflow is that both of these applications have advanced masking abilities to control where the noise reduction is being applied, however, only ON1 can also do layering within the program. This can be a big advantage to those who need varying localized noise reduction and sharpening without having to deal with going in and out of Adobe Photoshop multiple times.

One other thing to look at is how previews are handled. Fully processing the photos at the end of the process can take some time, so previews allow users to get a good but not perfect example of what the photo will look like. I find that ON1 previews are snappy and update in near real-time when dragging the sliders. The downside is that the preview accuracy compared to the outputted photo is only what I would call “decent.” On the other hand, Topaz Labs previews take longer to process and update, but the accuracy is close to the same as the outputted photo.

Since I’m the one doing the processing, here’s my idealistic result to keep in mind: I believe noise reduction is a balancing act. Completely wiping the noise away until the photo is a smeary mess of zero detail is easy — any editing program can do that. What I aimed for in my testing was getting to the point where the noise was reduced as much as possible while also keeping or enhancing as much detail as possible in the image without getting “crunchy.”

This generally means I like a little bit of noise left in the photo so it doesn’t look plasticky and doesn’t wipe away the fine details that benefit from a little grain-type noise. Noise present in the results below is not an indication that the programs cannot obliterate it, it’s a reflection of me trying to get the best-looking results while toeing the line of clean, yet detailed.

What I found here was that I was able to get more fine detail out of Topaz Labs with this comparison. However, ON1’s Color slider was able to do away with the high ISO color cast happening in the image.

In this comparison, you can see that neither ON1 nor Topaz Labs have any good reason to be touching the RAW files. Both are looking sickly when editing off the RAW compared to Capture One. I say, let the RAW processing be handled by the professionals.

While I think it’s easy for the eyes to go for Topaz Labs here because it’s more vibrant, when it comes to noise reduction I think ON1 was able to clear more color noise in the darkest areas. It’s just a shame about its RAW color processing.

This one left me speechless at how amazing ON1 NoNoise AI can be. Look at all that fine detail brought into the deer’s fur while still removing the noise. Topaz Labs ended up getting muddy details that I wasn’t able to finesse into anything better. There are parts where NoNoise AI gets oversharpened in my opinion, but with masking and layers inside the application, it can be toned down on a local basis.

Once again, ON1 is able to clear the color noise better than Topaz Labs. It also brings out details better, but it does teeter on being too sharp in some areas. It’s another impressive performance from the new ON1 NoNoise AI when Topaz Labs DeNoise AI has been around for a couple of years.

It’s In the Details

Today, my winner is Topaz Labs DeNoise AI for being more flexible in where I can use it in my workflow while getting good results much of the time. I find the RAW color processing side of ON1 NoNoise AI to be poor, and it gets worse when Capture One doesn’t play well with the converted DNGs once imported back in compared to the camera manufacturer’s proprietary RAW file.

That said, other than some quirks of using ON1 NoNoise AI — like its insistence on always defaulting to the annoying split-screen slider and jumping zoom levels when I didn’t ask it to — I prefer its toolset and layout more. I feel like I’m really able to hone in on what I need to do to get the best results. I think that once ON1 learns to deal with already-processed RAWs from a superior processor (it’s unusably bad when you try it right now) then it will take over as my go-to noise reduction software.