OnePlus is gearing up to introduce the next king of its budget lineup in the form of the OnePlus Nord 2 5G. Unlike the last year’s model that was still a mid-range smartphone with Snapdragon 765G, this year’s model will have flagship-like performance thanks to the MediaTek Dimensity 1200-AI. Yesterday we saw a leaked poster revealed by OnePlus that confirmed the smartphone’s design and its upcoming Blue Hazer color finish. Now, more renders have emerged through an online report. The report reveals all the colorways in which the OnePlus Nord 2 5G will arrive. The leak also confirms the OnePlus 9-esque design.

According to a report from Pricebaba alongside tipster, Ishan Agarwal confirmed the previously leaked design on the OnePlus Nord 2 5G. The design language is reminiscent of the OnePlus 9 series. In addition, the device will come in just two colorways – Grey Sierra and Blue Haze. Both variants can be seen through the newly leaked renders.

The back panel features a rectangular-shaped module at the top left. It comprises two large camera sensors and a smaller unit placed alongside the LED flash. The power button sits on the right edge, while the volume rocker is on the left. The display flaunts a punch-hole cutout in the top-left corner that serves as a home for the selfie snapper. The device still packs an alert slider which is nice since it is absent on the OnePlus Nord CE 5G. The device also has a USB Type-C port, a SIM tray, and a speaker grille at the bottom. It measures 160 x 73.8 x 8.1 mm.

OnePlus is bringing a new customized version of the MediaTek Dimensity 1200 with some extra “AI capabilities”, hence, the Dimensity 1200-AI name. The device will have up to 12 GB of RAM and up to 256 GB of Internal Storage. The specs come around a 6.43-inch AMOLED display with a 90Hz refresh rate and HDR10+ certification. It also has a Full HD+ resolution, Corning Gorilla Glass 5, and an in-display fingerprint scanner. 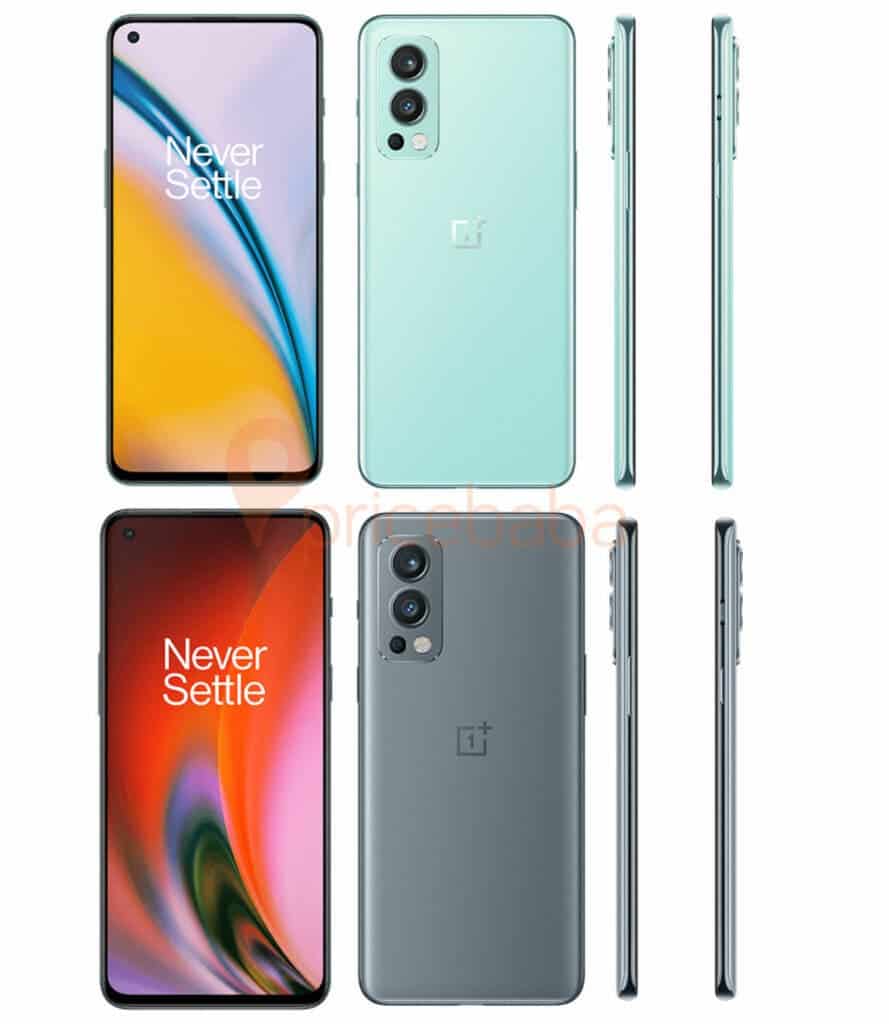 OnePlus has also confirmed that the Nord 2 will feature a 50 MP Sony IMX766 primary camera. This particular unit boasts Optical Image Stabilization. The secondary unit is an 8 MP ultrawide module, and the 2 MP tertiary sensor probably stands for macro or depth sensing. Further, the device will come with a 32 MP Sony IMX616 front camera.

Other specifications include a 4,500 mAh battery with support for Warp Charge 65W. The device also runs OxygenOS 11.3 with Android 11 straight out of the box.