Home » Blog » Panasonic GH6 release imminent? Panasonic’s running a competition to give one away
Camera

Panasonic GH6 release imminent? Panasonic’s running a competition to give one away 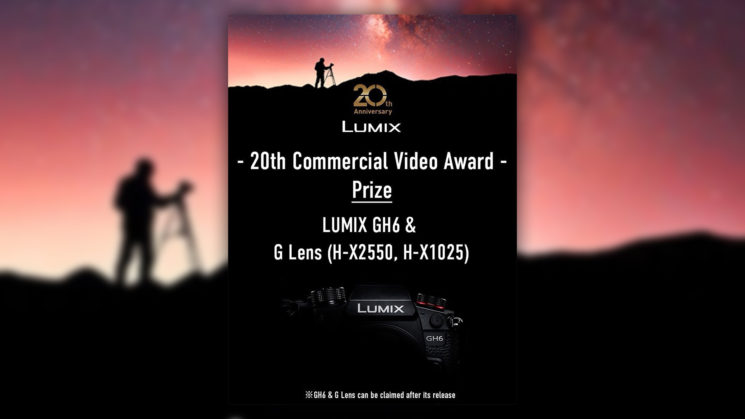 Well, this is odd. Panasonic has decided to run a competition to celebrate its 20th anniversary with a competition which has the Panasonic GH6 as its main prize. Yes, that’s right, a camera that’s not even been announced yet. The winner will receive the GH6 (after it’s release) along with the recently announced Panasonic 25-50mm f/1.7 ASPH and Panasonic 10-25mm f/1.7 ASPH lenses.

We are happy to announce the Commercial Video Award for the celebration of Lumix’s 20th Anniversary. These 20 years would not have been possible without your love and support as we continue to become better than before. We are grateful for that feeling and would like to invite all of you to share a video based on the theme of “LOVE” and create a commercial video with you!

What is the definition of “LOVE” for you? Please show us how you would express your “LOVE” in a video filmed with a LUMIX camera. Many say that “LOVE” is family, friendship, relationship or others that are important in your life. Or it could be a memorable place or a hobby with strong passion, or even an object you have been using since childhood. We look forward to seeing your definition of “LOVE”.

▶How to Enter◀
1) Follow @lumix
2) Pick one or more videos taken with LUMIX camera.
3) Post 15-30 sec. video with an explanation on Instagram.
4) Put the following hashtags: “#LUMIX20thLOVE” and the camera model of which the video was filmed (ex. #LUMIXGH5)
→ DONE!

▶Contest Information◀
・Entry ends on Sep. 30th, 2021.
・Nominee will be contacted via DM, and featured on @lumix
・Please make sure your account is public so that we can see your entry!
・When using a lens, please hashtag the lens model as well.
・Please check out our terms of this commercial award from highlight <CM AWARD>

It is a very strange move for a company to offer a prize up for competition that hasn’t been announced beyond a development announcement and doesn’t really have any real specs announced yet. Still, I suspect the winner of this will probably be on of the first to get their hands on one.

To enter, you just need to post a 15-30 second video shot on a Lumix camera (although how they’ll check that, I’ve no idea), on the topic of “love” without any music or sound. You need to include the hashtag #LUMIX20thLOVE along with the hashtag of the camera model used to shoot it.

The rules say to pick “one or more” videos, so I guess you can enter as many times as you like.

Save 49% on the Treblab X5 true wireless earbuds