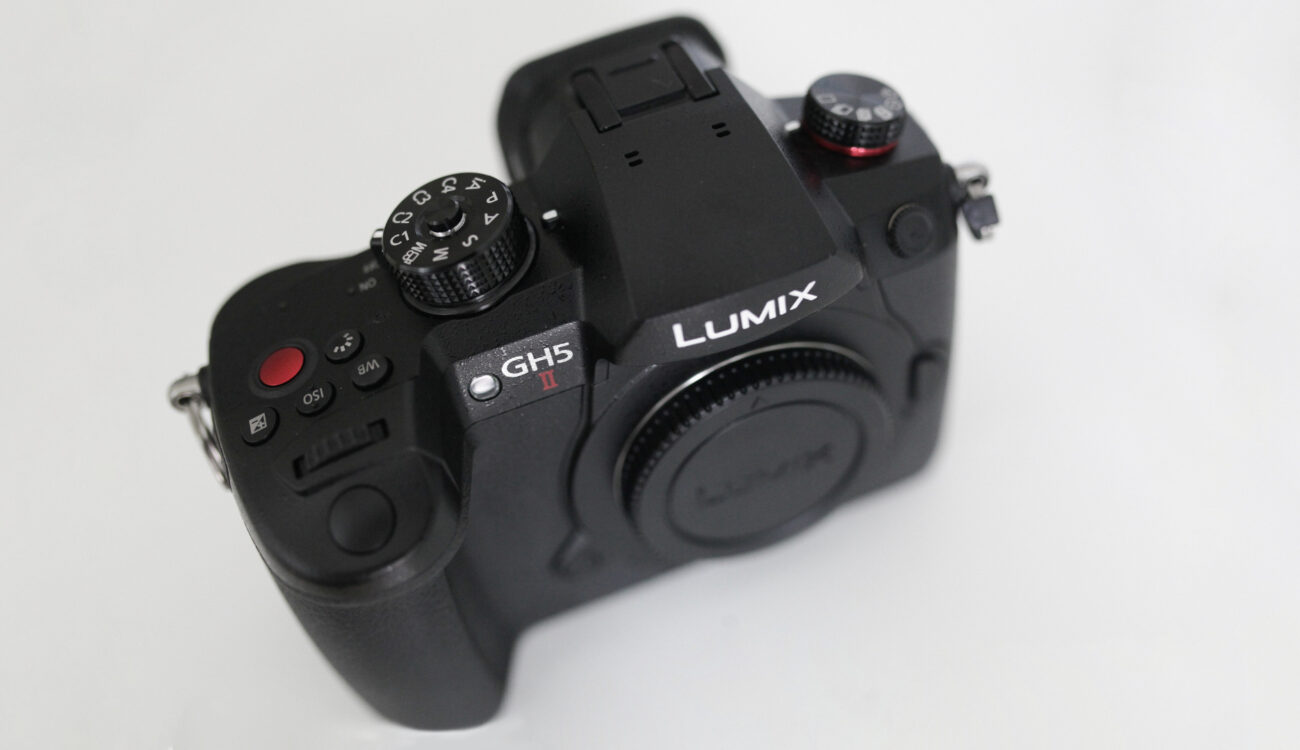 The Panasonic Lumix GH5 II is a 20.3MP, mirrorless Micro Four Thirds “hybrid” camera with live streaming, and is touted as a solid upgrade to the iconic GH5 that was introduced in 2017. There are all kinds of new bells and whistles on this upgrade in terms of cinematography and live streaming capabilities, with the GH6 coming out soon, is it worth upgrading for people who already own the GH5?

I’ll be looking at it strictly as a still photographer, so take a look at Johnnie’s review and mini-documentary highlighting the new cinematography upgrades.

The physical characteristics of the GH5 II are almost the same as the GH5, but now the Record button is bright red and there is a bright red highlight on the Mode dial. The body is composed of a magnesium alloy – very light, easy to handle and fully weather-sealed. Dust and splash resistant, it can handle temperatures down to -10C / 14F.

There are four buttons on the top of the camera above the Record button, four buttons on the back above and below the dial, as well as buttons next to the eyepiece on the left. It feels like a lot to navigate quickly on a camera body that’s this small.

Panasonic improved the menu to streamline with the menus in its other Lumix cameras, i.e. the same menu structure. The menu is extensive and you can customize and save your profiles.

It’s easy to get around through the touch screen and I like using the Quick Menu as well – the button is easy to locate, logical and simple to navigate. The only downside for me? I had to stop shooting to work with it – if I have to take my eye away from my subject, I’ve lost my photo.

The flip screen is smaller on the GH5 II (3 inches from 3.2 inches), but the resolution is higher at 1.84m dots. Panasonic claims it’s 150% brighter than the screen on the GH5.

When I look at all the specs, there is no doubt that the GH5 II is a very powerful video camera with professional features geared heavily towards video shooters. Plus, with the new live-streaming feature you can connect to the WiFi on your smart phone or a router.

I would look at this camera very seriously if I was a vlogger, content provider, or if I worked in any environment where I could put the live-streaming capability to good use: weddings, sports and concerts, travel videos directly to YouTube or Facebook, and the list goes on. And although the GH6 is coming out soon, I expect it to be clearly more expensive. So for those who do video and content, and who want to switch back and forth from video to live streaming to grabbing a photo without changing cameras, there is a spot for this upgrade.

Taking it out for a stroll

My first trip out with the camera was to the Pride Parade in the City.

The light was harsh, from bright sun to deep shade, and I could not see well either on the back screen or through the EV so I set the camera on face detection and continuous AF and trusted that the AF was doing its job. In only one shot was the person closer to the camera out of focus, so not bad.

It tracks faces and movement easily. It can’t, however, read my mind, and in general, I missed quite a few shots of people who were not the camera’s choice as the main subject. I realized pretty quickly that in order to get what I wanted in a group shot, I would have to turn the tracking off. If I didn’t, the time it took to adjust for one photo and then re-adjust for the next was enough for me to lose the shot all together.

Gradations of color were lovely, and the photos were surprisingly sharp for hand-held. The stabilization was spot on. Focus with the touch screen was fast as was the joystick, but I lost spontaneous photos of people when I used the touch screen to focus.

What about low light?

Back home again, I tried the camera out in a few low-light situations. It seemed I could get better photos if there was a range of light the camera could work with. I had problems with the higher ISOs. Photos with one type of flat light came out slightly blurry, but shooting through the glass doors with that dynamic range turned out very well.

If I wasn’t concentrating on speed (meaning “people”) both the dynamic range and amount of detail was outstanding. Once I got the camera set up, it was just a matter of point and shoot with a small amount of exposure compensation. I can imagine this being a very good camera for traveling, out in nature, or doing City walks. Here are some sample photos.

Let’s Put It to Work

I had a wedding to shoot on the weekend and took the GH5 II as my third camera next to my DSLRs. So why didn’t this camera work for me? Probably a few reasons, and mostly to do with the way I use a camera. I tested it pretty much side by side so I could compare the quality of the photos in various controlled situations. The problems I had at the Parade were the same ones I had at the wedding. When there were a few people busy in various areas of a room, the camera quickly chose who it felt should be in focus.

This is great if you’re shooting a video, but the time it took to refocus on who I wanted, or to turn off the track feature and set the camera so that everyone was in focus, lost me the photo. I had no better luck with the camera in low light at the first dance or during the dinner and speeches. It’s great for shots when I’m not in a rush, but I need to be fast and precise at an event or a wedding shoot. I could turn the features off so the camera doesn’t make my choices for me, but then I lose the point of having this camera.

So Who is this Camera for?

The GH5 II is mainly geared towards videos and live-streaming. If you are a content provider and need a few photos, or if you live stream and need to take some snaps, or even better, if you are traveling and want to bounce back and forth between video, live stream and stills, then this camera will give you what you want and more. In certain situations, it will give you a beautiful photo.

Personally, I didn’t need all the features the camera offered me, and when I used them they slowed me down. If I thought that in the end the features would enhance my photography, I would have loved it, but in all situations that involved people and movement, I was spending more time on the tech and less time on what was happening in front of me. In the end, once the novelty wore off, I’m not sure it would be a camera I could use.

Here is a sad example of a photo I wanted to take of friends after dinner. They were laughing, natural, having a good time. But instead of connecting with them and getting what was happening in front of me, I was navigating buttons and menus to a point where I lost it, and not just technically!

My mistake was in thinking I could pick up the camera as I normally do, and take the photo with some simple adjustments. As you can see, this was a no-go. If you’ve set the camera up for one thing, you have to take the time to reset it for another, and it’s not as simple as simply adjusting ISO, speed or aperture. Of course if I used the camera consistently over a longer period of time, I would move more quickly towards the features I need, but then I have to ask myself why I would bother to have those features in the first place. It’s odd to think of a camera actually doing too much – but this is a little like getting a five-course meal when all you wanted was a terrific main course.

Because I’m a still photographer that leans heavily towards the “art” side of things, I want to capture a moment when it presents itself (portraits, dance, theater), and that means quickly. I just don’t need all those extras, and in fact, they get in the way of my creativity and what I’m trying to do.

Should I buy it? It depends!

The GH5 II is still a great choice for cinematographers, Instagrammers and content providers, and with regards to photographers, as long as concentrating heavily on the technical side of things doesn’t interfere with what you’re doing (think of landscapes, travel, etc.) or slow you down, then this camera won’t let you down.

For me personally, I would spend this type of money ($1,697.99 at the time of this review) on a camera or a lens that leans more specifically towards features that I need, and that support me in shooting what I see, when and how I see it.

What do you think? Is this a worthy camera for both videographers and photographers? Share your experiences in the comments below!