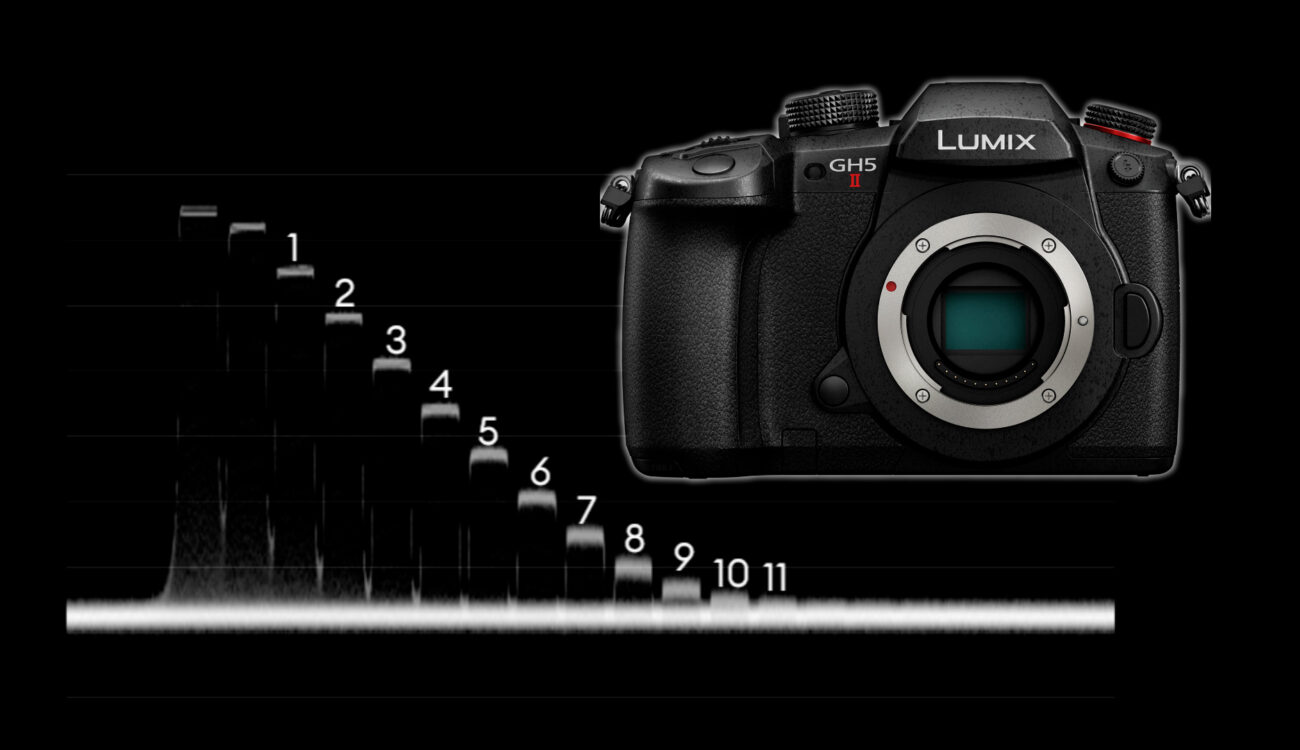 Quite some time after the release of the LUMIX GH5 in early 2017, the successor GH5 II has now arrived at our lab. It claims an enhanced performance because of its new sensor architecture and updated Venus engine. Curious to see how it performs? Then read on…

Whenever I hear about a new release of a Micro Four Thirds (MFT) sensor-based camera, I get really excited. As I mentioned in some earlier articles, my love for larger sensor cameras started with the LUMIX GH1 in the year 2009. MFT sensor-based cameras are super versatile in terms of lens adaptation – they typically show low rolling shutter values and fare quite OK in the dynamic range department.

Hence, since 2009 there is no (gear) excuse anymore as all of these MFT-based cameras shoot beautiful footage 😉 Just have a look at Johnnie’s review and mini-documentary he shot with the LUMIX GH5 II here.

When I tested the LUMIX GH5 in 2018, I was a bit disappointed as it showed only 9.7 stops of dynamic range at a signal to noise ratio of 2, and 10.8 stops at SNR = 1. Other MFT sensor-based cameras like the GH5S, or the Z CAM E2 exhibit about a stop more, and the recently tested LUMIX BGH1 displayed even 11.6 stops at SNR = 2.

So let’s see what the revamped GH5 II has to offer.

As usual, we apply our 300Hz strobe light to create pairs of black and white stripes from top to bottom of the recorded image, an artifact that is typical for CMOS sensors and allows the measurement of rolling shutter values.

If you are not aware how we test dynamic range, please have a look at the documentation of our procedures here.

As can be seen with V-Log L, clipping occurs already below the 80% luma value. About 11 stops can be identified above the noise floor, and a weak 12th and even weaker 13th stop are visible inside the noise floor.

For one, these results are 0.8 stops better than for the original GH5, and second, about 2 more stops above the blue SNR = 1 line (11.5) in the middle graph are identified. If the codec of the internally recorded H264 10bit 4:2:2 files is strong enough to capture also details within the noise floor, these additional 2 stops can be “excavated” using advanced noise reduction techniques in postproduction. Spoiler alert! Yes, the codec allows digging into the shadows, as will be revealed in the latitude section below.

I also looked at higher ISO values, and what I found is that the dynamic range values at the SNR = 2 and SNR = 1 thresholds become lower for each increase of ISO. For example at ISO2500 the following waveform is obtained:

Images become noisier (which was expected), and about 10 stops can be seen above the noise floor. IMATEST confirms this, check the result below. Dynamic range values drop to 9.25 stops at SNR = 2 and 10.6 stops at SNR = 1:

Therefore, because this sensor only features one native ISO value at ISO400, be careful in lower light situations as higher ISO values impact the dynamic range quite a bit.

As written in earlier lab reports, latitude describes the capability of a camera to retain colors and details when over or underexposed and normalized back to a zero baseline exposure level in post.

In our case, we have a standard studio scene where the base exposure is (arbitrarily) set to 60% luma value on the waveform for the forehead of our talent, in this case, my dear colleague Johnnie. Camera settings were again ISO400, V-Log L in 4K DCI mode:

As can be seen in the waveform plot of the Xyla21 chart in the previous section, this setting is already quite hot for V-Log L, as only 2 more stops are available for overexposing before clipping occurs:

The red channel at Johnnie’s forehead is close to the clipping value of 768 in the 10bit space (V-Log L). On the left side, some patches of the Datacolor Spyder are already clipping.

From there we underexpose the scene by stopping down the iris of the lens from T1.5 to T8, and then onwards by reducing the shutter angle from 360° to 180°, 90°, and 45° degrees – giving us 8 stops of exposure variation. Let’s see if the camera can cope with that. For reference, the shadows on our standard studio scene are 5 stops below the subject’s face.

However, colors are retained well, and the noise shows a fine structure without larger blotches of chroma noise, hence the image can be cleaned up very nicely with noise reduction:

At 5 stops under base exposure, pushed back the image is at the cusp of breaking up. It shows a pinkish tone, mainly due to the heavy chroma noise which is all over the place:

However, the noise is again finely dispersed, there are no artifacts visible like horizontal or vertical stripes, hence noise reduction can still clean this image up reasonably well and with that also the pinkish tone (from the chroma noise) can be tamed. However, transitions into deeper shadows still have this pinkish tone – which looks quite unnatural.

So, at this point the limits of usability are definitely reached.

The 6 stops under base, pushed back image looks like this:

And here, even heavy noise reduction cannot save it – there are these larger blotches of luma & chroma noise that are easier to identify in the moving images than in the static, downscaled ones we show here, and overall colors are getting weird. That’s then “game over”:

Nevertheless, the results are quite amazing for an MFT sensor, to be honest. Exposure latitude for the GH5 II in our standard CineD studio scene is 7 stops (2 over to 5 under) – lifting it to a similar level like the recently tested full frame Sony a7S III – having a four times bigger sensor (see our test here)! The recently tested LUMIX BGH1 camera for example was hampered by strong horizontal lines in the underexposed images, hence only 6 stops of exposure latitude were measured here.

And that’s mainly due to the fact, that there are no visible artifacts like horizontal or vertical lines, and the internal codec manages to encode the fine noise in heavily underexposed images such that noise reduction in postproduction can save the images.

The Panasonic Lumix GH5 II definitely is a major improvement over its predecessor, the LUMIX GH5. It fares quite well in all departments, be it a low rolling shutter, OK dynamic range results, and good latitude capabilities.

Again, Panasonic shows the capabilities of modern MFT cameras paired with solid internal recording resulting in a very robust, organic picture that can be pushed around hard in post without breaking up.

Have you shot with the LUMIX GH5 II already? What are your experiences? Share your thoughts in the comments section below.