To commemorate 20 years of the tragic September 11 terrorist attacks in 2001, photojournalist Richard Drew looks back on the split-second moment in which he captured “The Falling Man,” an iconic and powerful photograph that brings back the horrors of that day.

Note: The video contains graphic images that may be disturbing to some viewers.

Photography is an incredibly powerful tool that can create a lasting impact as proved by photographers who have created iconic images that have become strongly embedded in today’s culture and collective memory.

One such photograph is “The Falling Man,” captured by Drew, an Associated Press photojournalist of almost six decades. His conviction throughout his career is that timing is everything and if the photographer is not present, the opportunity to document important moments will be lost.

In an interview with CBS Sunday Morning, Drew looks back on the day the deadliest terrorist attacks were committed on American soil which saw thousands of people killed, including hundreds of first responders.

On the day of the attacks, Drew was on an assignment, shooting a maternity fashion show. His office called him and told him a plane had hit the World Trade Center building, and Drew immediately headed towards the epicenter of the attacks and started photographing the moment he left the subway.

As a veteran photojournalist, Drew knows what it takes to document horrific events — he remains objective, shuts down his personal responses, and focuses on recording history.

This is the same principle he also applied to photograph the desperate people who were trapped on the upper floors of the burning World Trade Center and had made the grave decision to jump to their death to escape the fire and smoke (as well as those who were blown out by force and fell).

As one such man fell, tumbling in the sky, one of the frames in the sequence Drew captured showed the man falling headfirst, vertical to the towers. This particular frame became known as “The Falling Man,” and the image was published in numerous newspapers the next day. Many readers found the photograph too shocking and disturbing to look at. 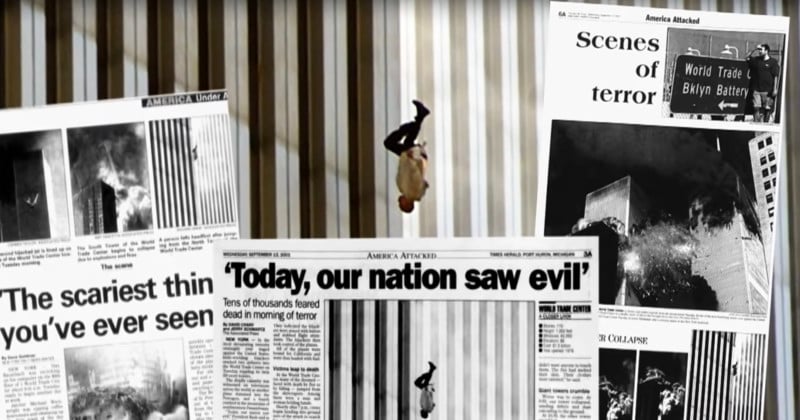 Twenty years on and this image still creates powerful emotions in the audience through its seemingly abstract portrayal of terror and pain endured that day. Drew explains this is because everyone can identify with it and feel that this person could be them.

One of the Pulitzer Prize-winning photojournalist’s most famous images is of a figure falling from the World Trade Center’s Twin Towers during the 9/11 terror attacks. He says that viewers identify with it because they think, “That could be me.” https://t.co/378a1oq4BV pic.twitter.com/Z9nAuotCMF

Drew’s photographs have also helped identify an additional victim who fell — his identity was confirmed by her fiancée who visited Drew in his office to go through the photographs, frame by frame.

More resources, support, and archives of the September 11 attacks can be found on the National September 11 Memorial & Museum website, while other powerful images from the Associated Press photojournalists have been curated by the organization in a recent blog post.