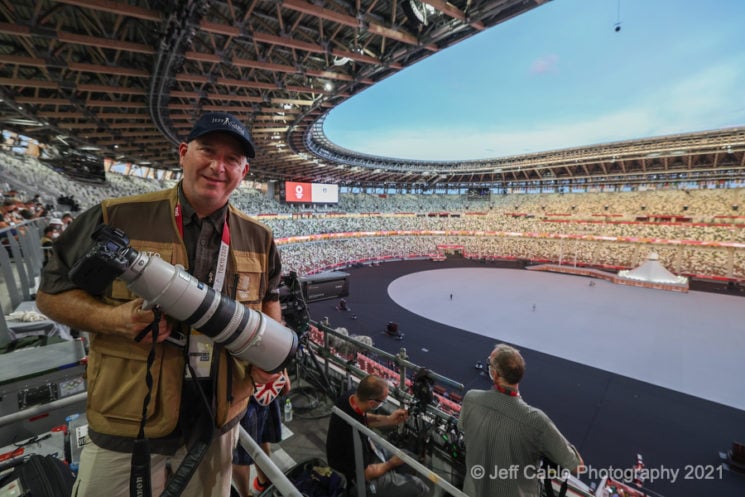 [A little while back, we caught our friend Jeff Cable’s post about him getting the Canon EOS R3. This is very exciting news for anyone who is waiting for a possible Canon R3 announcement in September. Jeff could absolutely not confirm if he even took the camera with him to the Tokyo Olympics, so the title is 100% my educated guess. Anyways, for anybody out there who likes Photography, sports, and the Olympics, Jeff’s blog is a must. This is it from your friendly editor, it is all Jeff from now]

Two nights ago was the long-awaited Opening Ceremony of the Tokyo 2020 Olympics (and yes, they still call it that even though we are in 2021). In some ways, it was like all the other openings I have done in the past, and in other ways, it was completely different.

The first major difference, of course, was that there were no spectators in the audience. But we were still required to be in our photo positions hours in advance and not allowed to move around the stadium at all. Normally we are packed in to our sections, but this time there was a seat in between each of us. I have to admit, I liked that part since it gave me room to have my equipment spread out around me. I always shoot with two cameras at these events, one with a long zoom (in this case the Canon 200-400mm) and one wide lens (this time I used the new Canon RF 15-35mm) for the firework shots. 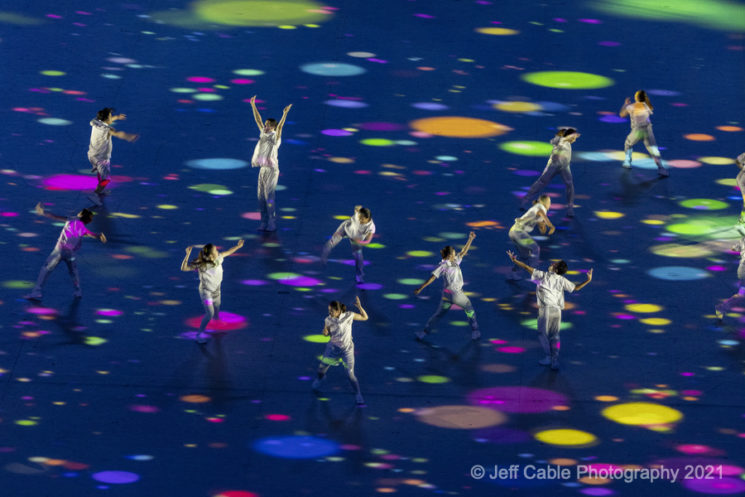 There was entertainment on the floor of the stadium, but it was not nearly as robust as normal. I am sure they were trying to keep the number of people in close proximity to a small amount. 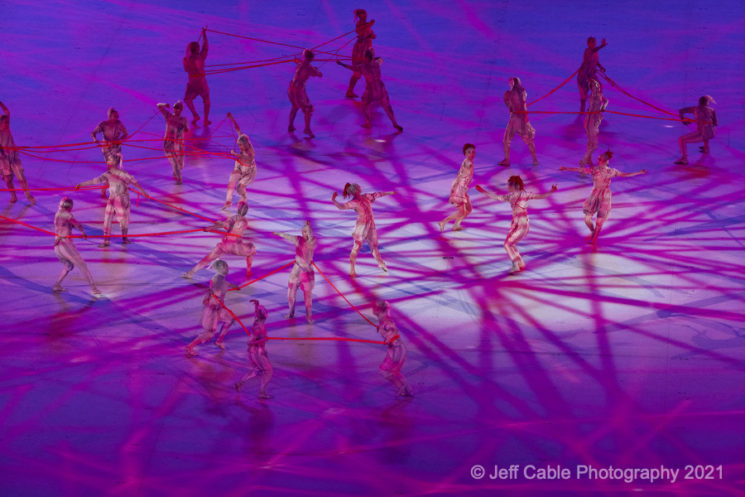 I used the Canon R5 with the long zoom for all the detail shots. The lighting was tough, so most of the time I kept the camera at ISO 3200. 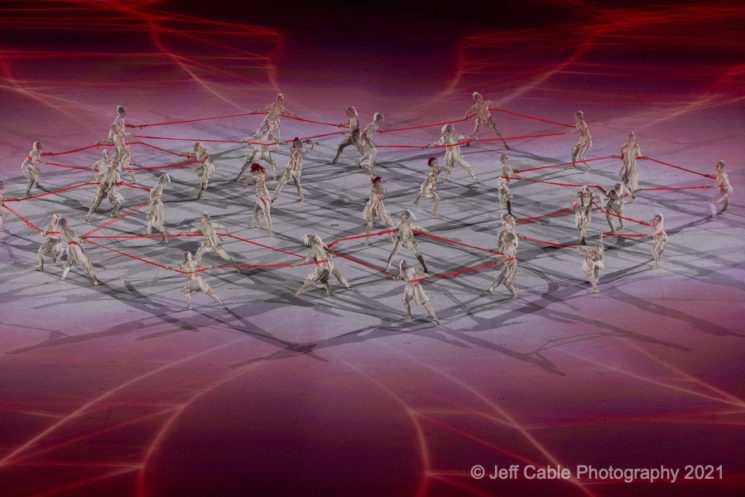 One of the reasons that I prefer to photograph with a zoom lens (as opposed to a fixed focal length lens) is so that I can zoom in for tight shots, but also pull back and get wider shots like this one. 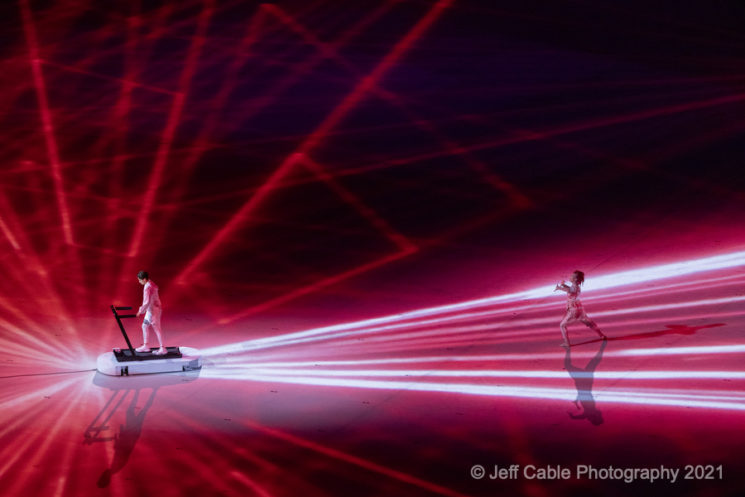 The lighting is always a challenge, even for the most seasoned professional photographer. I tend to underexpose all of my photos at opening and closing to protect my highlights, and then I make adjustments in Photoshop later. 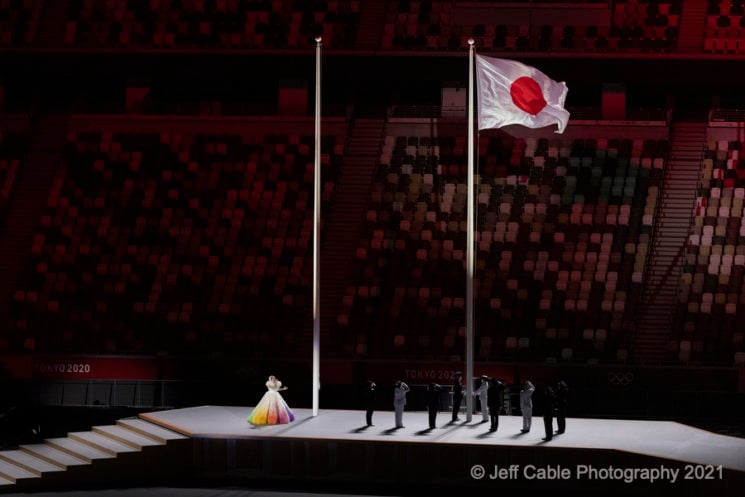 I try to capture all the key moments, like the raising of the Japanese flag. 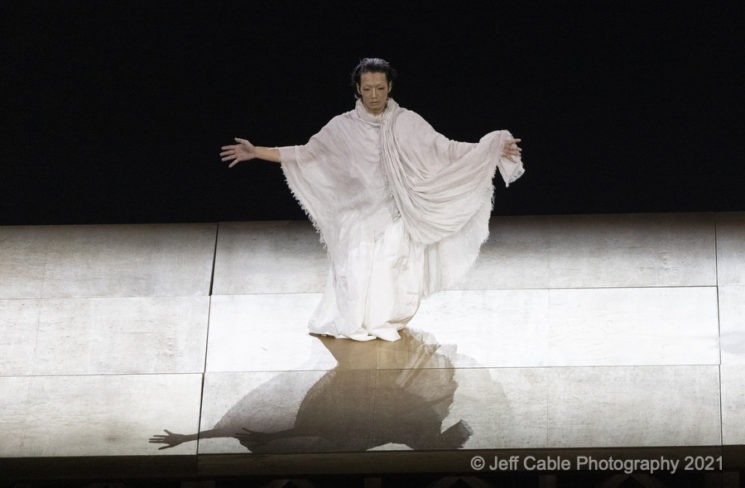 Unlike most people who watch the ceremony at home on their television and get the commentary, many times I honestly have no any idea what is happening in front of me. I am just looking for cool photos. 🙂 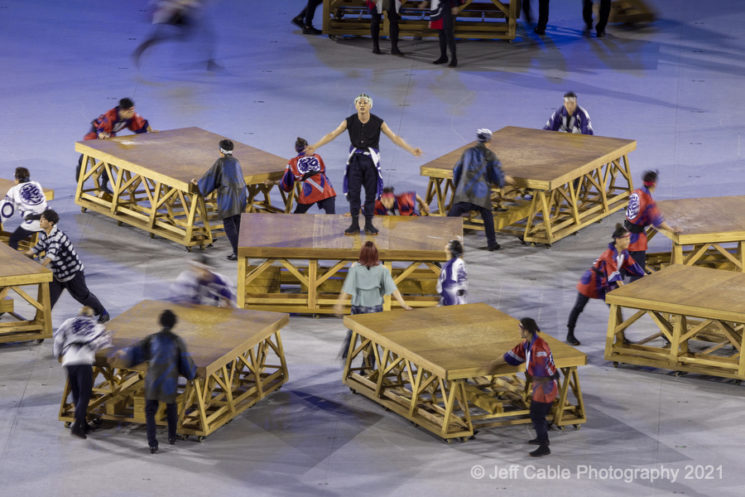 I always look for moments where the subject is standing still and people are running around them. I quickly change my camera settings to a really slow shutter speed to blur everyone but the main subject. This is one of those shots. It was taken at 400mm and 1/6th of a second. Even having the camera on a monopod, it is hard to get this shot in focus and sharp. 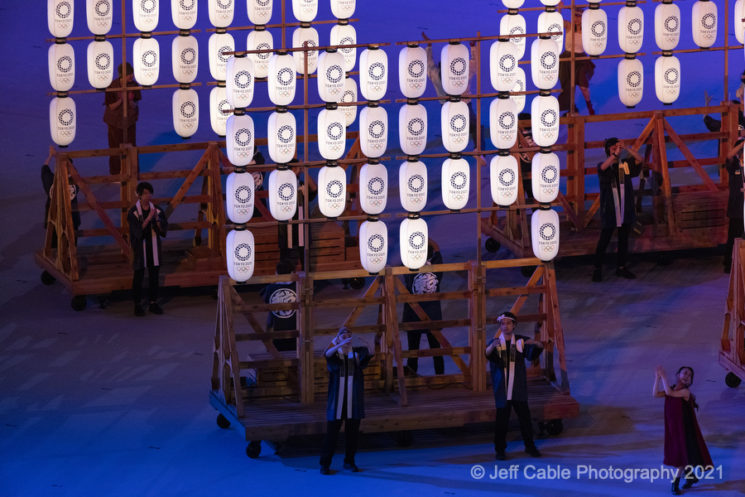 Then it was back to my normal settings and looking for cool detail shots. 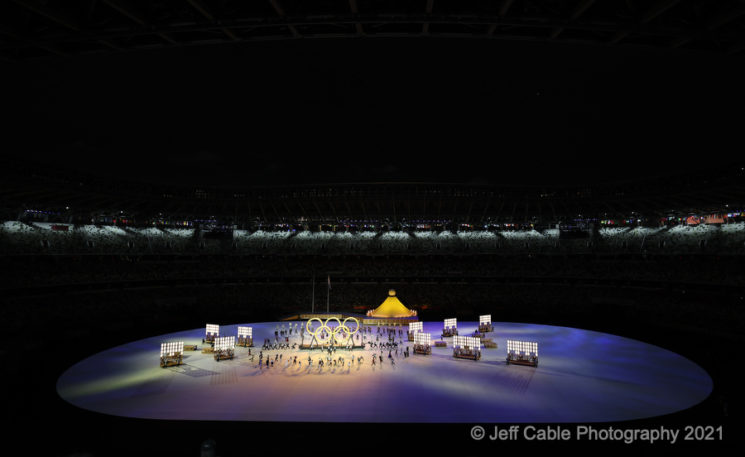 I was sitting next to my buddy, Kyle, from USA Today and he had the cheat sheet of when the fireworks would go off. So, in anticipation of that, I would switch from the long zoom to the camera with the wide-angle lens. 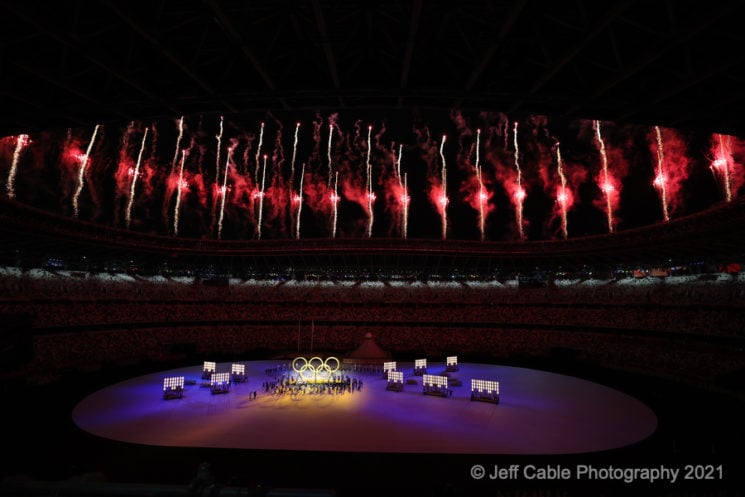 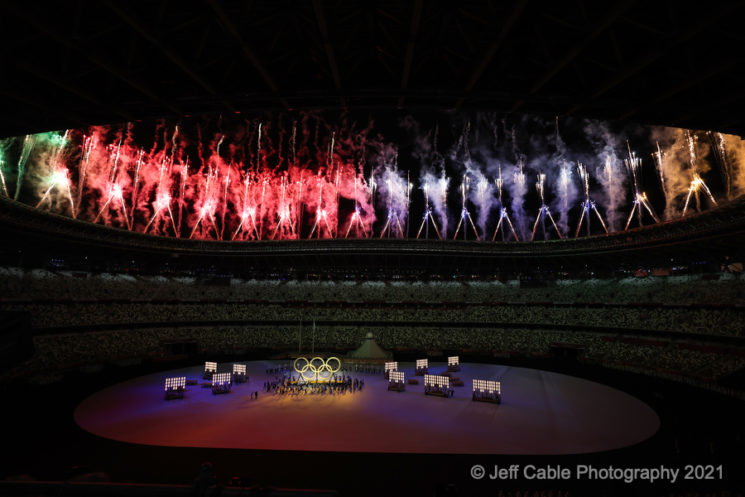 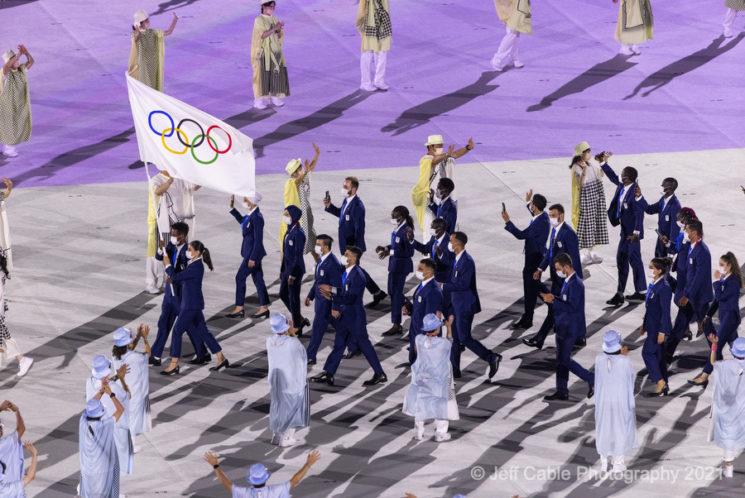 Then it was time for the teams to enter the stadium. This time there was a team for refugees (entering under the Olympic flag), which was really cool. 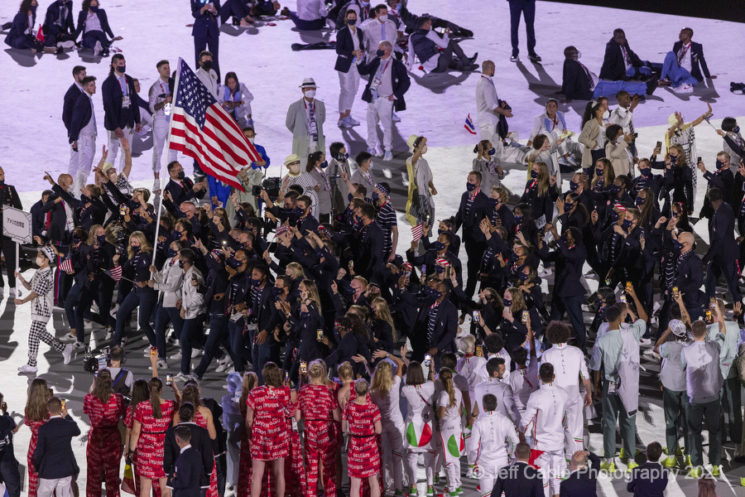 After waiting a REALLY long time, Team USA entered the stadium and I fired away to get photos of our team. 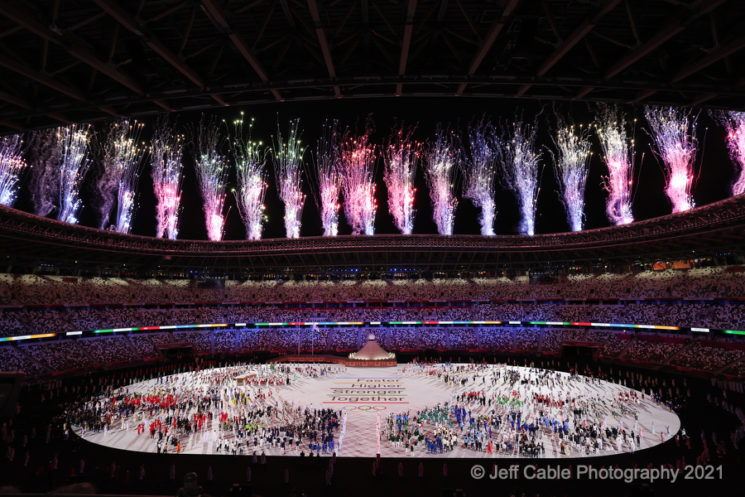 After all the teams had entered, it was time for more fireworks. I wanted this shot with the fireworks over this year’s Olympic motto, “Faster, Higher, Stronger, Together”. 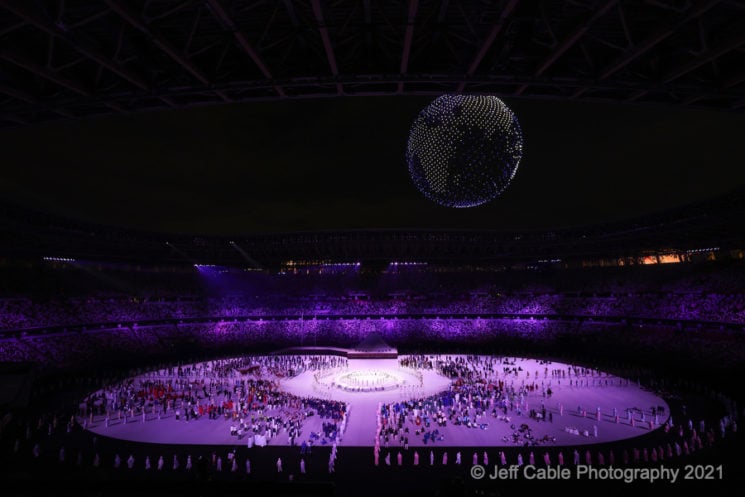 The coolest part of the evening was the drone show (powered by the 1800 Intel drones). I took a ton of photos of this and then had to put the camera down for a second and take it in with my eyes. It was absolutely spectacular to see in person. 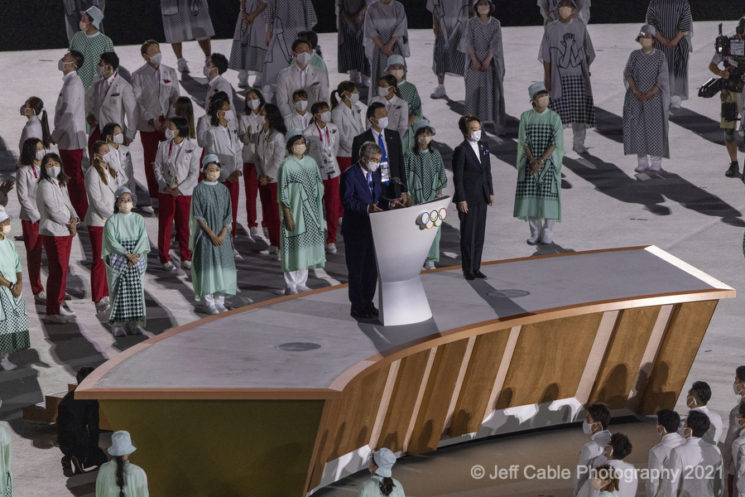 This is the head of the IOC giving his speech. I know that he is an important guy, so I took a couple of photos of him. Then while he talked, myself and many other photographers took the time to download images. 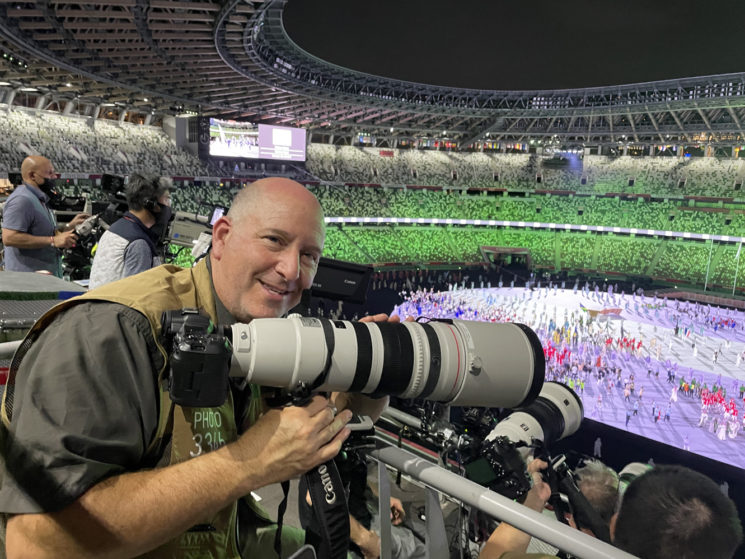 We also take time to get photos of each other. And I should say that we were all wearing masks, but I took mine off quickly only for photos. 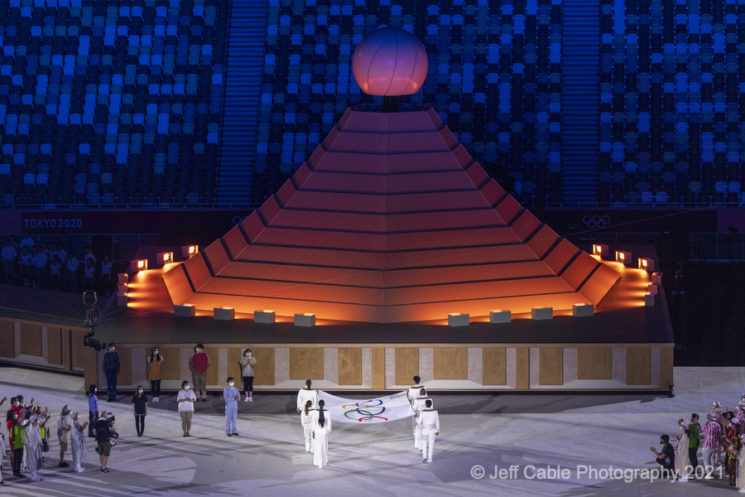 Here is the Olympic flag entering the stadium… 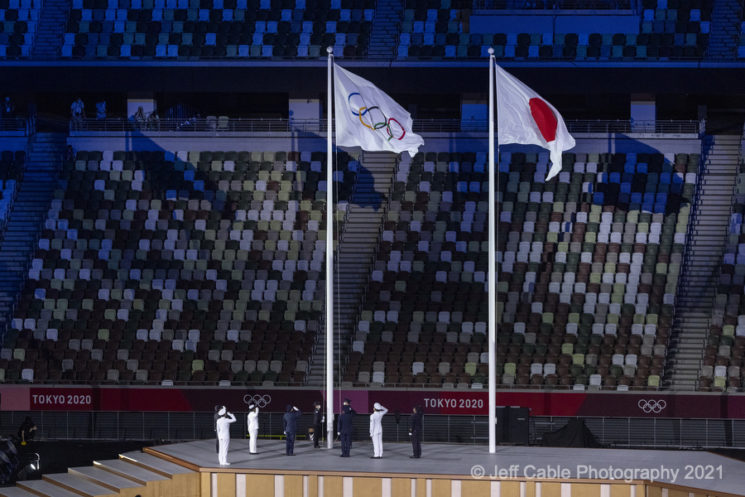 …and being raised for the first time. (If you look to the very left of the frame, you can see the fans that are blowing to make sure that the flags wave.) 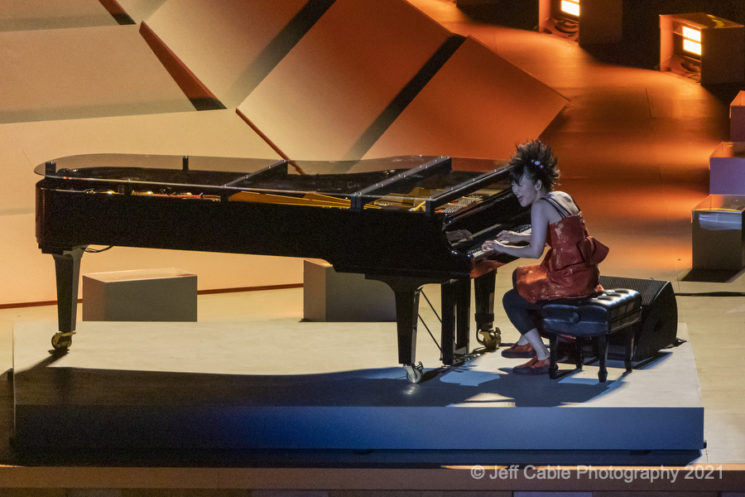 Hiromi Uehara (I looked it up) hitting the keys. 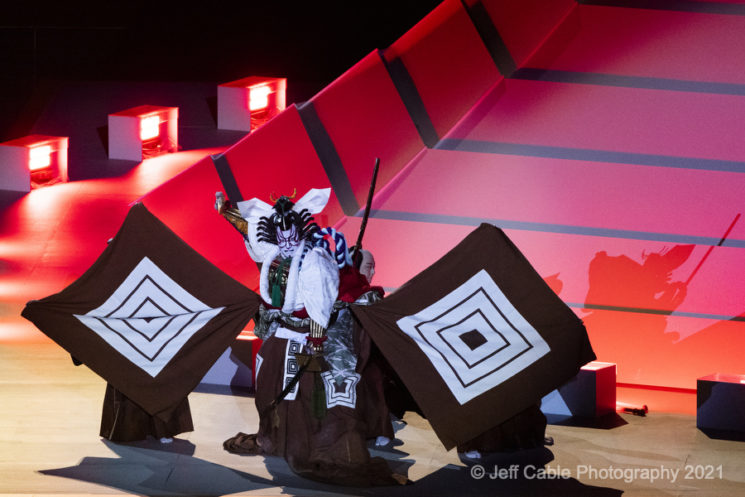 I framed this shot to get the cool eyes of the character, but also the shadow on the background behind him. 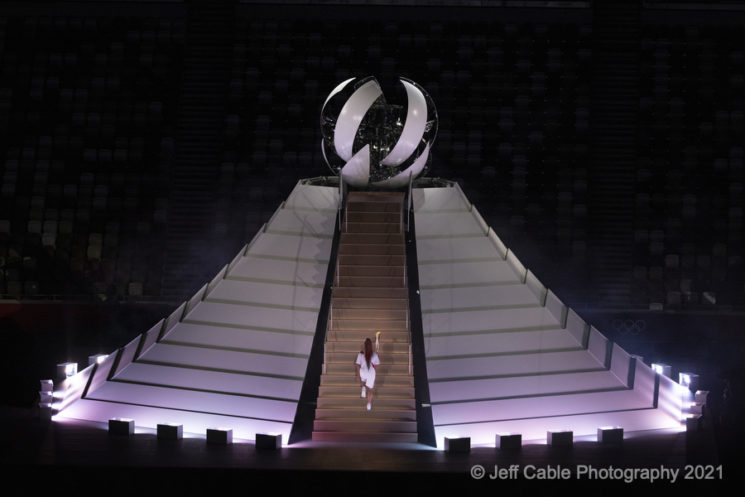 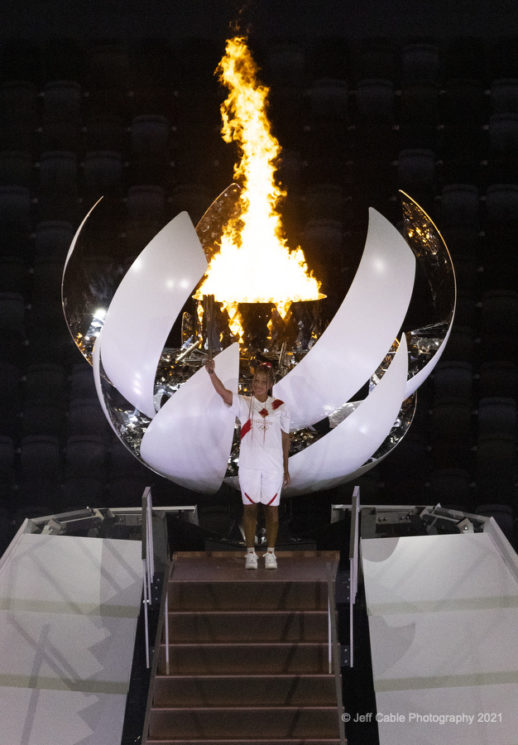 Then it was time to light the flame and get these Games officially started! 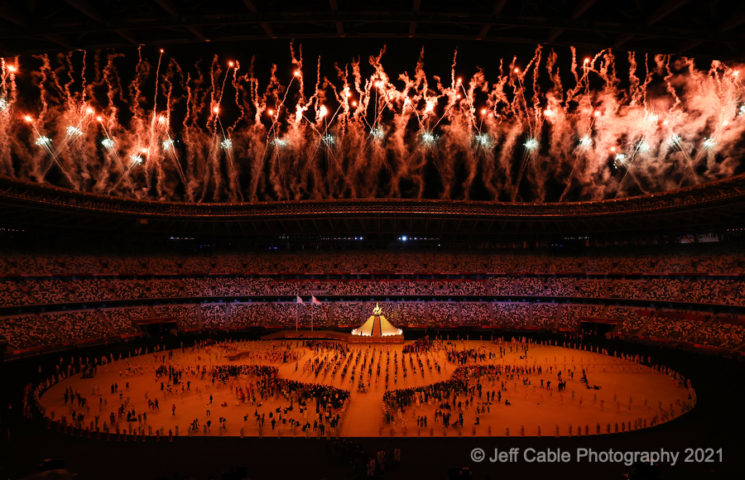 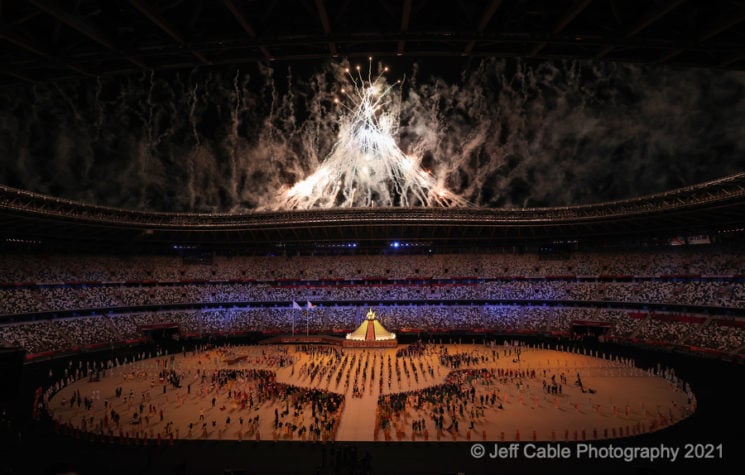 They always end the Opening and Closing Ceremonies with fireworks. As you can see, there were not that many athletes left on the floor by the time the ceremony was over at 11:45pm. 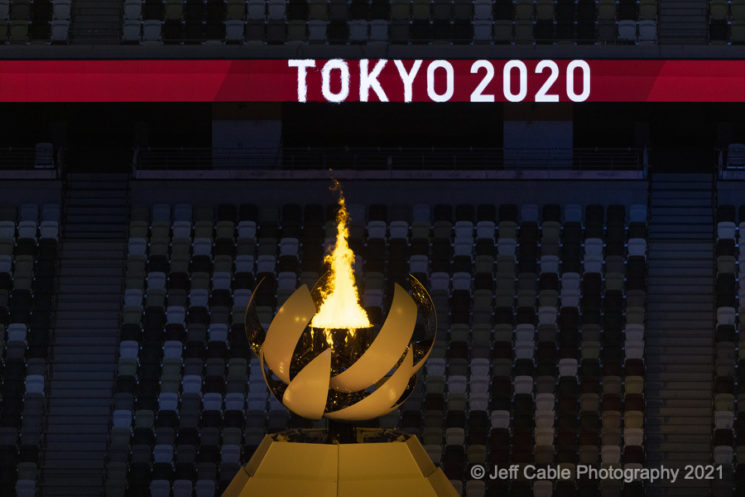 The fireworks ended and I was about to pack up my gear when I look across the stadium and saw the Olympic flame burning under the Tokyo 2020. I also saw that it was burning in front of empty seats and I thought that this really told the story. And that my friends is what photographers do, we try to tell the story in photos.

After everything was done and I was packed up, it was the challenge of getting out of the stadium and getting a bus back to the main transport mall. Even though there were no spectators to contend with, there were still thousands of media there all trying to get out. I ended up getting back to my hotel room at 2:30 am and going to sleep around 3 am (after a much-needed shower). I was back up at 8 am to retouch these photos and write this blog.

Now I am heading back to the Olympic venues to photograph my first water polo game. This one is the woman of Team USA versus the home country of Japan.

I hope you enjoyed seeing images from the start of these Olympic Games!

Jeff Cable is a world-renowned, five-time Olympic photographer having covered Beijing, Vancouver, London, Sochi, and Rio. He is one of the most sought-after presenters and educators in the photography space. You can find out more about Jeff on his website, follow his adventures on his blog, or reach out to him through Facebook. This article was also published here and shared with permission.