A Realme Pad official teaser has given us a glimpse of the company’s first tablet’s sleek and slim design before the official unveiling. The Indian-based Chinese company announced its first notebook dubbed the Realme Book Slim last month. Recently surfaced reports suggest that the company is also set to launch its first-ever tablet. With the company hinting at its arrival, the Realme tablet may be just around the corner.

Last month, the Realme Pad passed through Geekbench benchmarking site with specifications and details that corroborate earlier speculations. Noted leaker Sahil Karoul suggested that the tablet will hit the store shelves in September, and the Geekbench listing hinted at an imminent launch as well. Furthermore, the tablet has been subject to several leaks and speculations surrounding its design and specifications. Now, after floating around the rumor mill for a long time, a small portion of the Realme Pad’s design has been uncovered.

Taking to his Twitter account on September 1, Realme India and Europe CEO Madhav Sheth gave Realme fans an official look at the Realme Pad’s side profile. The tablet appears to be extremely sleek and slim. The tweet was accompanied by a poster that revealed the tablet’s ultra-slim design. Moreover, it appears to be housed in a metal body. Aside from that, the image shows a protruding camera at the back. According to an earlier leak, the tablet’s dimensions are 246.1 x 155.8 x 6.8mm. The tablet is 8.4mm thick at the camera bump.

Tablets can easily be carried anywhere for work or entertainment. However, holding them for too long can be a challenge. There is a need for a real-ly light & slim ones for your ease and we might just have a solution!

The Realme Pad’s Geekbench listing sheds light on what the tablet will offer in terms of specifications and features. First off, it suggests that the device will ship with 4GB of RAM and come running on Android 11 OS. It is speculated that the operating system will be based on the Realme UI, which is used for tablets. Furthermore, the tablet is likely to sport a 10.4-inch AMOLED display that will be encompassed by thick black bezels. Earlier reports claim that the camera sensor occupies the right edge when the tablet is held vertically. It will pack a MediaTek Helio G80 chipset under the hood, according to GSM Arena. 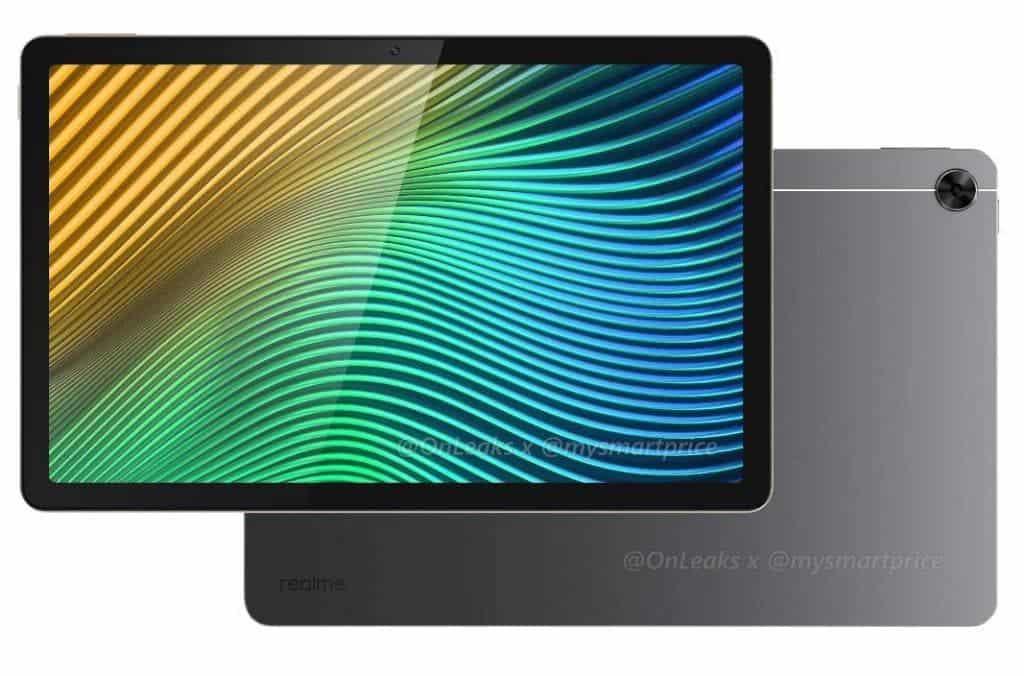 The tablet will reportedly come with an 8MP camera with an f/2.8 aperture on the front and back. The most notable difference between them is that the front shooter will have a fixed focus, and the rear-mounted camera will support auto-focus. Two speakers and the power button are on one side. There are two more speakers, along with a USB Type-C port on the other side. The bottom houses a small cutout to hold the stylus. The volume button is near the camera module. It is likely to use a 7,100mAh battery that supports fast charging.

While Realme has still not officially confirmed the Realme Pad price in India, multiple reports suggest that it will go on sale for INR 20,000 (about $272) in the country. Regrettably, details about its availability are still few and far between.