Today, Redmi India took to its official Twitter handle to announce that the company will hold a new product launch conference in India on September 3. According to the company, it will unveil the Redmi 10 Prime at this event. Redmi dubs the Redmi 10 Prime as an “All Round Super Star”, which is a new work launched by Redmi for the thousand-yuan (<$150) market. At present, Redmi 10 Prime has obtained the Bluetooth SIG certification and there is an official confirmation that this device will come with MIUI 12.5 out-of-the-box. 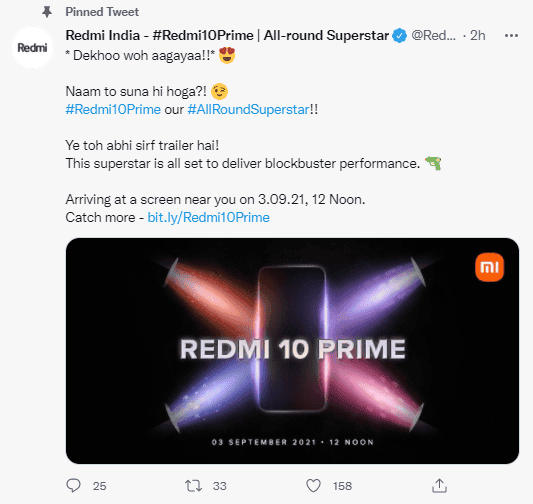 Redmi previously launched Redmi 10 in Malaysia. Judging from the naming of Redmi 10 Prime, this new smartphone is a derivative version of Redmi 10. We expect the specifications of the two to be similar.  The 4GB + 64GB version of the Redmi 10 is selling for 649 Malaysian ringgits ($153). Also, the 6GB + 128GB version is on the shelves for 749 Malaysian ringgits ($177). The Redmi 10 Prime is similar to Redmi 10, and it is expected that the mobile phone will also be priced similarly.

The Redmi 10 Prime will come with a 6.5-inch Full HD+ LCD screen with a 90Hz AdaptiveSync refresh rate. This means that the display can dynamically switch between 45, 60, and 90 Hz refresh rates. Everything depends on the content which is been shown on the screen. The display has a centered punch-hole comprising the selfie snapper.

In terms of optics, the device boasts a Quad-Camera setup. It comprises a 50 MP primary camera sensor, an 8 MP ultrawide camera. There are also two 2 MP modules for depth and macro. For selfies and video calls, the device has an 8 MP front camera. In addition to the hardware, users can expect the whole plethora of MIUI Camera features to come with the handset.

The Redmi 10 Prime draws powers from a 5,000 mAh battery with support for 18W fast-charging and 9W reverse charging. The device packs a 3.5mm headphone jack, a microSD card slot, IR Blaster, and USB Type-C port. It’s a 4G VoLTE smartphone with dual-band Wi-Fi 5 and Bluetooth 5.0. Moreover, it packs a side-mounted fingerprint scanner and dual stereo speakers. It weighs around 181 grams and is 8.9 mm thick.

FF14 Maintenance – How Long Will FF14 Servers Be Down?