Samsung is giving an important step for its Galaxy A and M-series this year. The Korean firm is finally adding 5G connectivity to its smartphones, even those looking for a budget smartphone are able to find 5G connectivity in a device such as the Galaxy A22 5G. However, this year’s journey in the 5G mid-range segment started with the Galaxy A52 5G and Galaxy A72 5G. The former came with the hard task of overcoming Samsung’s best-selling smartphone of 2020. The original Galaxy A52 5G was a good device, but the performance was not on par with some offerings in the mid-range department. To address that, Samsung introduced the Galaxy A52s 5G which pretty much addresses all shortcomings in the original device.

The Samsung Galaxy A52s 5G was revealed last week. The device boasts the Qualcomm Snapdragon 778G chipset which is far better than the Snapdragon 750G on the original variant. For instance, the new platform is built on the 6 nm standard versus 8 nm on the SD750G. The new platform also brings cutting-edge ARM Cortex-A78 cores and an enhanced Adreno 642L GPU. The device was first launched in the United Kingdom. However, it will reach other markets very soon, and apparently, India is the next country in line for a launch.

Its release in India isn’t a big surprise, after all, the device got a support page in the Samsung India website even before its official launch. Now, a new poster suggesting the device’s launch in the country has emerged. Unfortunately, the poster itself only serves to confirm the device’s arrival. There are still no clues about the pricing in India. Interestingly, in the UK the phone costs only £10 more than the original. 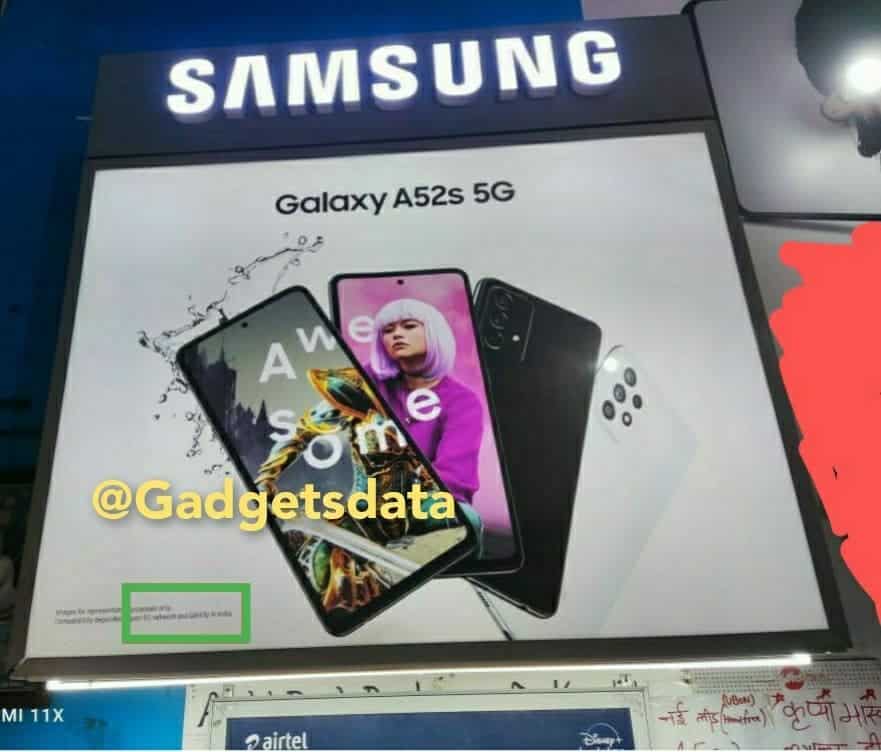 Putting the new chipset aside and the “s” in the name, the phone also slightly upgrades the display. We still have a 6.5-inch diagonal, and the display still is an AMOLED panel. The big upgrade is that now it offers a 120 Hz refresh rate over the 90 Hz on the vanilla 4G variant. Other specifications such as the 64 MP Quad-Camera setup and the 4,500 mAh battery are still the same. Samsung has also been softer with this phone by offering a 25W fast-charger rather than the bundled 15W adapter in the vanilla. The new variant, unfortunately, will be limited to Black and White colorways in India, as suggested by the leaked poster. In the UK, it has Mint and Violet colors.