A new set of Samsung Galaxy M22 renders have surfaced online, giving us a glimpse of the upcoming smartphone’s key specs and other details. The South Korean tech company is expected to launch several smartphones this year.

The Galaxy M22 is one of the impending devices set to launch under the M-series. The phone has already passed through Thailand’s NBTC certification with model number SM-M225FV. It will be an affordable handset. Earlier this year, the company launched budget offerings such as Galaxy A22 and the Galaxy F22 that looked similar but had different battery capacities, sizes, and thicknesses.

The Galaxy M22 is slated to hit the store shelves soon, but its design and some key specs have already leaked in the form of renders, via DealNTech. The M-series bears a striking resemblance to the A-series. As a result, Galaxy M22 seems to draw inspiration from the Galaxy A22 in terms of design. The phone features an Infinity-V display, which is essentially a waterdrop notch placed on top of the screen. 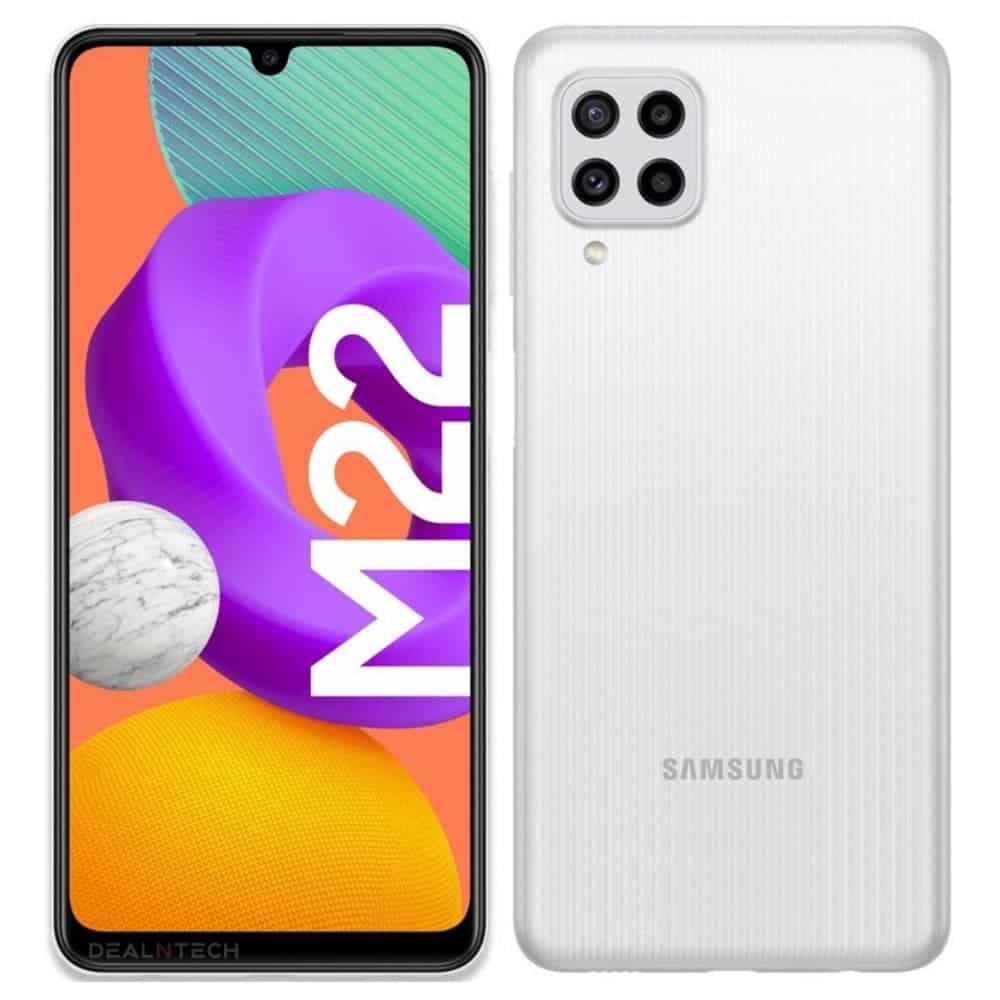 The rear-mounted square-shaped camera module features four cameras along with an LED flash. As far as specs are concerned, the phone will feature a 6.5-inch HD+ Super AMOLED display with 1600 x 720 pixels resolution with a refresh rate of 90Hz. Under the hood, the phone will pack a MediaTek Helio G80 chipset. 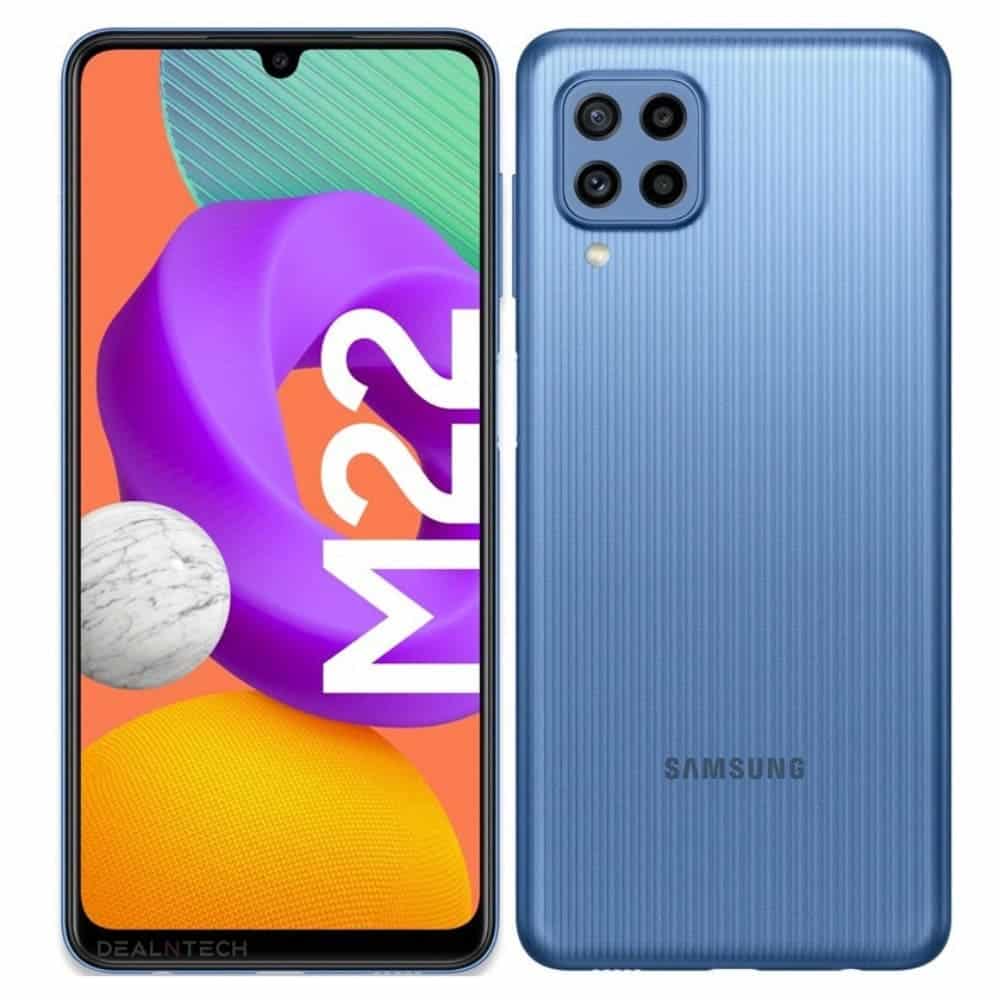 Furthermore, it will ship with 4GB of RAM and offer 128GB of built-in storage capacity. It is still unclear whether the smartphone will come in other memory variants. The device will feature a microSD card slot so that customers can expand the internal storage up to 1TB. 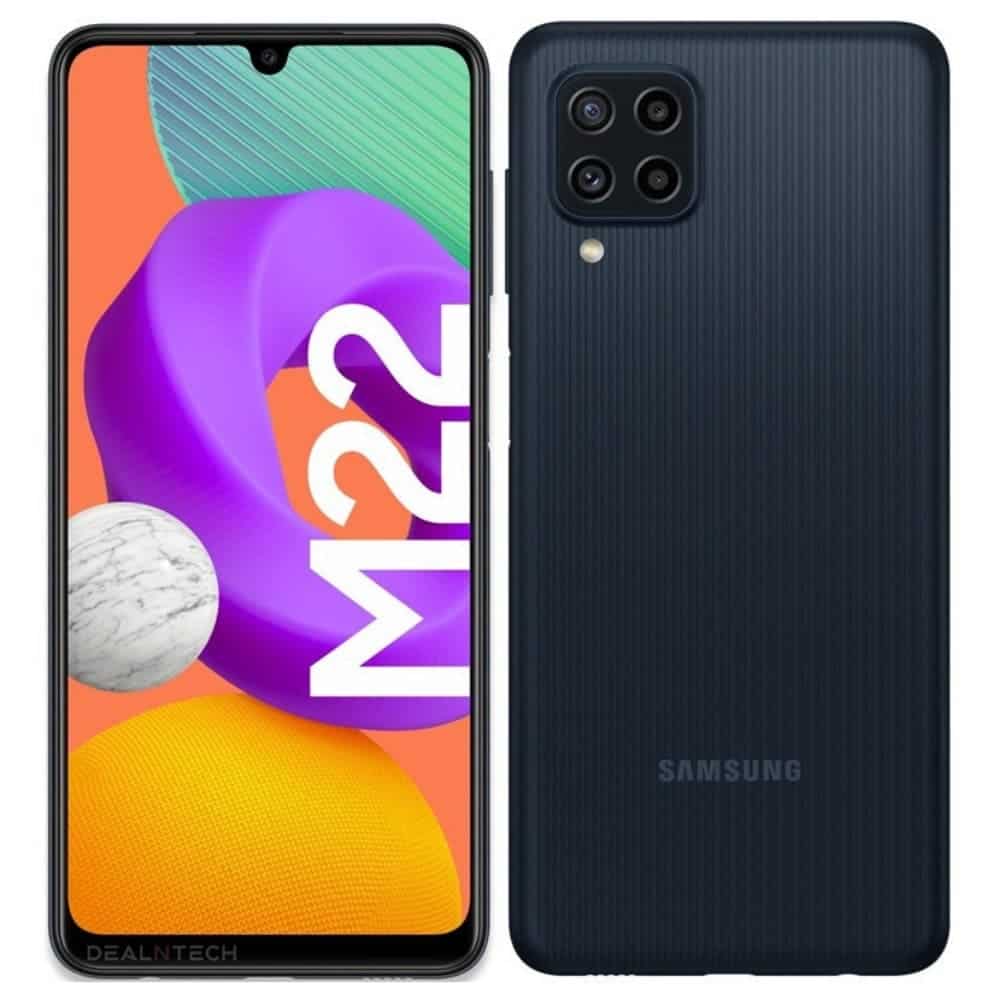 The phone is expected to come with a 48MP main camera, an 8MP secondary ultrawide lens, a 2MP macro lens, and a 2MP depth sensor. Upfront, there’s a 13MP shooter for taking selfies and video calling. Furthermore, it will run the Android 11 OS out-of-the-box with Samsung’s One UI on top. It is backed by a 5,000mAh battery that supports 25W fast charging.

The Galaxy M22 is expected to go up for sale in three appealing color options including White, Blue, and Black. While details about the phone’s pricing and availability are still scarce, its European pricing leaked. Earlier this month, tipster Sudhanshu Ambhore shared a screenshot of the phone, which was listed online with its European pricing. The listing suggests that it will retail for EUR 239.90 (about $282). This price includes VAT and is for the 4GB RAM + 128GB ROM variant