As a result, Samsung introduced its first S20 FE Fan Edition. It is essentially the same hardware with some minor changes to allow the decrease in the price. The Galaxy S21 FE 5G has been floating around the rumor mill since April, but it finally made an appearance in four different colors on July 1.

A leaked marketing render, which was originally shared by Android Headlines, gives us a glimpse of the Galaxy S21 FE 5G in four different colors. Following in the footsteps of its precursor, the Galaxy S21 FE 5G adopts the same general layout that comprises a rounded rear camera setup placed at the top-left corner of the phone.

Moreover, the S21 FE appears to be housed in a fully plastic frame. It also sports the same color across the edge and the camera module. Despite being compact, the bump accommodates three rear camera modules. It can be recalled that the S20 FE came with a significantly downgraded camera power. However, details about the camera capabilities of the S21 FE  are still scarce. 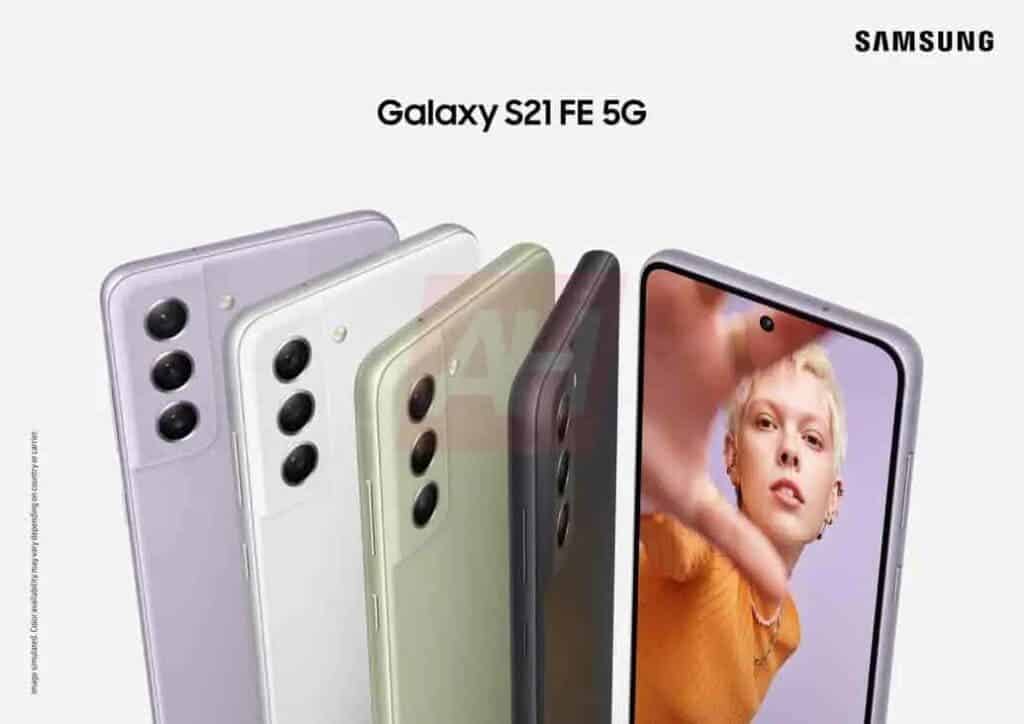 The slightly larger S20 FE sported a 6.5-inch display with a 120Hz frame rate. Considering that larger mobile phones sell better, the S21 FE is likely to adopt the same form factor. Aside from that, if it packs the same processor as the main series, it will be powered by a Snapdragon 888, with 8GB of RAM and 128GB of internal storage capacity.

There Will Be More Color Options For The S21 FE

If the recently leaked render is anything to go by, there will be a major difference in the color department. It will not follow the main Galaxy S21 models as far as colorways are concerned. The leaked marketing images suggest that the S21 FE will go up for sale in Blue, Light Green, White, and Light Violet.

A 3D image of the handset hinted at a gray color option, which is not included in the latest leaked renders. The S21 FE is expected to arrive in the U.S. in Gray, Light Green, White, and Light Violet colorways. The Blue model will be launched in the European market, but Samsung could change its mind just ahead of the launch.

Launch Date, Price, And Other Details

There is a possibility that Samsung may launch the Galaxy S21 FE only in select markets. Samsung will be releasing it in other countries later. There are slim chances that the phone will be announced during the Unpacked event on August 11. Regrettably, details about the phone’s price are still few and far between.

Some reports suggest that the phone could retail for $630 and $720 in Korea. This is close to the $699 price tag the Galaxy S20 FE carried in the US last year. Samsung will likely go for the same price point and offer the S21 FE for $699.