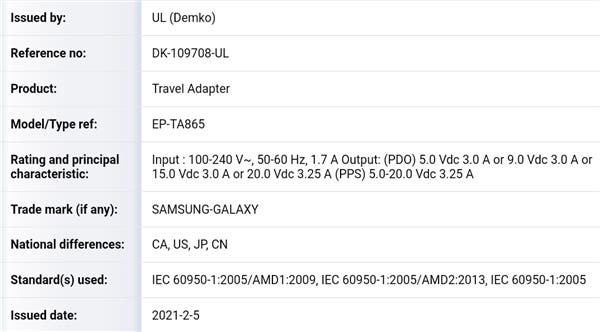 A recent documentation from the Danish UL (Demko) organization shows the certification of a Samsung 65W charger. We can see that the charger model is EP-TA865 and it supports USB PD and PPS protocols. Also, it supports multiple charging powers such as 15W, 45W, and 65W.

So far, the rumors claim that Samsung is testing 65W fast charging for the entire Galaxy S22 series. The latest report regarding this smartphone shows that the Samsung Galaxy S22 series now has the Chinese 3C certification. The certification shows that this series will come with up to 65W fast charging technology. This will significantly improve the experience of Samsung’s flagship.

In addition to the improvements in performance and fast charging, the Samsung Galaxy S22 series will have a better imaging system. The Samsung Galaxy S22 and S22+ will use a 50-megapixel main camera and support four-in-one pixel technology. The Samsung Galaxy S22 Ultra will have a vivo-like micro-head design for the main camera. This can effectively increase the stabilization effect during shooting and also increase the video shooting capacity. At the same time, it will also be jointly tuned with the old camera manufacturer, Olympus. The expectation is that Olympus will offer a powerful camera solution. With Olympus, the Galaxy S22 Ultra’s comprehensive imaging performance will be a force to reckon with in the market.

Which Aspect Ratio is Best for your Photo / Video?