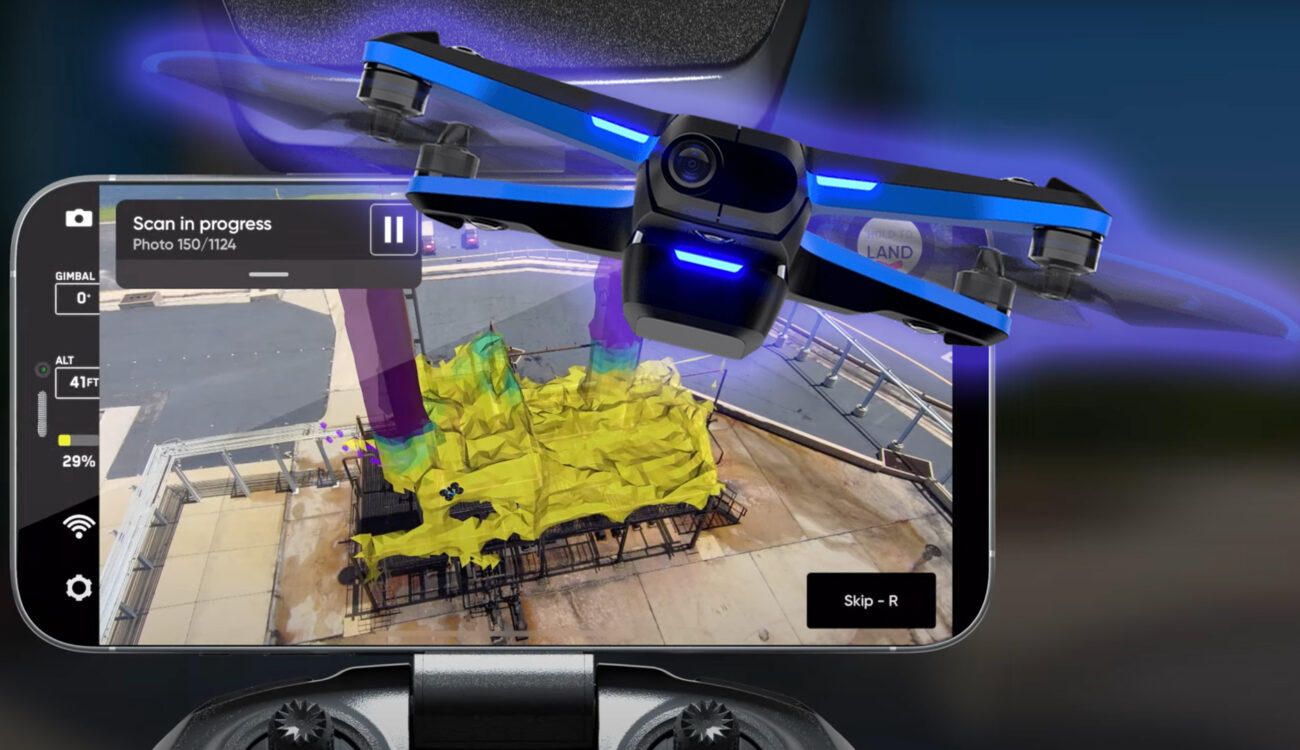 What would you do if you had a tool in your kit that could help you create realistic 3D models that can be used for VFX work? Or scan your backyard and crash a spaceship into it? Recreate a location you can only visit once? Extend your set! That is exactly what California-based Skydio, manufacturer of the Skydio 2 autonomous drones, is offering you. Photogrammetry made autonomous!

Photogrammetry is a process that uses photography to survey, map, and measure distances between objects. This laborious process begins with taking photos of an object or space from every angle imaginable. All of these photos are then stitched together to generate a 3D object. A digital twin, Skydio calls it. Photogrammetry scans created by drones are used mostly in enterprise-level industries. From infrastructure inspection, and construction operations, to crash reconstruction for investigators.

“But I’m none of those things,” you say!

The amazing thing about technology today is that it can be used for a myriad of different things. Like using a photography camera with video features to shoot the Season 5 premiere of House. Or, like using drone photogrammetry to recreate Las Vegas for Zach Snyder’s The Army of The Dead.

Early in June of 2021, Skydio released 3D Scan, an optional software package to be used in conjunction with its autonomous drone, Skydio 2. The drone itself is marketed for Sports and Cinema use, as well as for hobbyists and pro users. Starting at only $1,349 for the Starter Kit, the Skydio 2 isn’t the cheapest drone on the market, nor is it the best for Cinema use.

But we’re not here to review the drone. You can read about that here. What we’re interested in is Skydio 3D Scan.

The new software uses an adaptive mapping engine that helps the Skydio 2 autonomously build a high-quality 3D model of a volume setup of the operator. That model is then used to plan the photogrammetry scan, where tens or hundreds of photos are taken, depending on your settings.

And the best thing about all this? The Skydio 2 drone does all of this autonomously.

While it is possible to use a regular drone or camera, or even a smartphone, to produce photogrammetry scans, the Skydio 2 can do the work faster and with robotic-like precision. Skydio claims a GSD (ground sample distance) of up to 0.5 millimeters per pixel, which is the size of a pixel represented in real life. In addition, two Augmented Reality features increase workflow efficiency and reduce scan errors. AR Coverage lets you see what pictures the drone has already taken, while AR Observer uses a 3D scene to show you where the drone is in real-time.

VFX artists can get Skydio’s 3D Scan software on an annual subscription basis that starts at $2,999 per drone, per year. While this may seem steep for a backyard filmmaker, small studios of VFX houses can use this technology to create Hollywood-level assets at a fraction of the cost.

Speaking of backyards, how are we going to get that CGI spaceship to crash without breaking the bank?

With our budget spent on the Skydio 2 drone and the 3D Scan software, it’s time to save some money. If you’ve ever wanted to work with VFX or 3D modeling, you’ve definitely heard of Blender. As an open-source 3D modeling program, Blender is completely free and customizable by the user. Managed by The Blender Foundation, an independent public benefit organization, Blender has been continuously developed and updated for almost 20 years. It now has features and capabilities that compete with industry-leading software packages from Autodesk and The Foundry. Director David F. Sandberg even used Blender to create some VFX shots for his film Annabelle: Creation.

Unfortunately, you will have to process the collection of photos from your drone before you can use it in Blender. Thankfully, there are open-source or budget-friendly options available, such as Reality Capture at $39.99 a month and Meshroom for free! Peter France on YouTube has a great breakdown of photogrammetry workflow.

Reality Capture or Meshroom creates a VFX-friendly mesh from our Skydio 2 photos, and once that mesh is in Blender, you can finally crash that spaceship into a photogrammetry scan of your backyard. Our house. Or car. Skydio even scanned the massive F1 engines on the back of a Saturn V rocket.

Whatever you are able to imagine within Blender, Skydio 2 and 3D Scan can help you do the work of an entire team of VFX people with its autonomous features.

Photogrammetry of The Undead in Las Vegas

What Skydio 2 and 3D Scan can do with one operator, VFX Supervisor Marcus Taormina and his team of 12 to 14 people took 12 days to do! When trying to recreate the Las Vegas strip for Zach Snyder’s Army of The Dead, the VFX team used LiDar, Phase ONE Digital Medium Format Cameras, scissor lifts, and drones to complete a similar photogrammetry process.

Granted, there is a difference in scale, workflow, and resolution, but the fundamental process between Army of The Dead and Skydio 2 is the same. Take a bunch of pictures, stitch them together, and make a 3D model. The wonderful thing about Skydio’s new tech is that you can now do so much more on your own!

Hollywood VFX from your bedroom

There is always going to be a difference between studio-level technology and what you can do from your bedroom. A full crew with a rental-only camera package will always be able to achieve more than what your nephew with a smartphone can. But we now live in an age where that difference is getting smaller and smaller. The Skydio 2 may not be able to achieve the level of quality that Marcus and his VFX team did for Army of The Dead, but it can get you pretty close. With the difference being so small, the only thing stopping you from creating incredible movies is your imagination.

Let us know what you would want to create with this autonomous system! Do you work in VFX? Tell us how this would speed up your workflow or save your budget.

How to open the task manager on a Chromebook