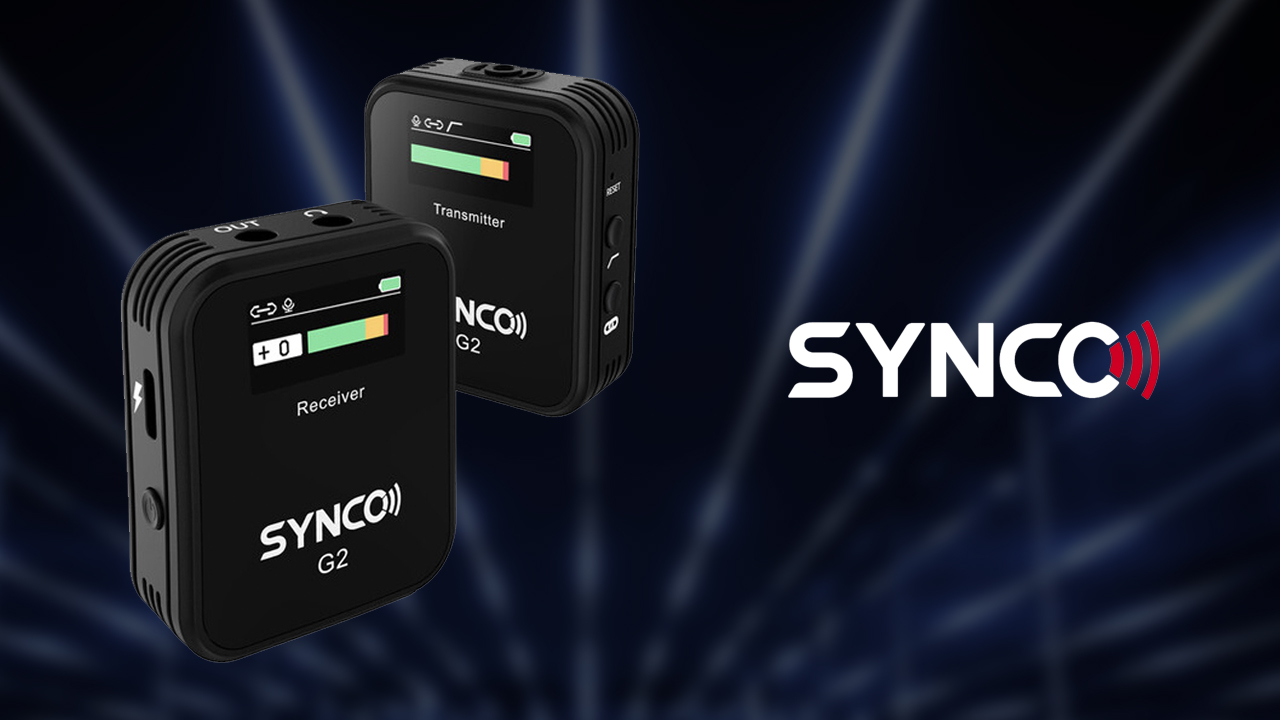 Chinese audio company Synco recently released their second generation of affordable wireless lavalier microphone systems: the Synco G2. Featuring a new color display on both the transmitters and the receiver, it is priced at $129 for a single transmitter setup and $199 for the dual-transmitter version.

At the end of 2020, Synco introduced their first 2.4GHz wireless microphone system: the Synco G1. Competing directly with the Rode Wireless GO, this model became fairly popular thanks to its easy-to-use approach and affordable price. Synco is now introducing an upgraded version: please welcome the Synco G2.

Like the previous version, the G2 comes in two options: the G2-A1, which is a 1-to-1 system made of one transmitter and one receiver, and the G2-A2, a 2-to-1 system including two transmitters. Let’s take a look at the major improvements.

Synco G2: new color display on both TX and RX

Both the transmitter (TX) and the receiver (RX) now feature a new TFT color display. This is a huge improvement compared to the previous generation since it finally makes real-time audio monitoring easy with this device.

The screen displays critical information, such as recording modes, battery status and audio levels. The company claims that the display is bright enough under most lighting scenarios. However, according to the available reviews, it’s quite difficult to properly see the screen under bright sunlight.

The transmission range has now been extended up to 150m Line-Of-Sight, which is a noticeable improvement compared to the 50m range of the previous generation.

Both the TX and RX are 52x42x17mm in size and only weigh 39g each. However, this high degree of compactness and lightness is made possible by a plastic construction. When it comes to build quality, you might be a little disappointed.

The G2 still features a clip-on design. The TX can be easily clipped on the talent’s clothes, while the belt clip on the RX also acts as a shoe-mount for rigging the unit on top of DSLRs or mirrorless cameras.

The G1 version was lacking a Mute button, which has now been added on both the TX and the RX. Talents can now mute themselves for improved privacy if needed.

The TX has a built-in microphone as well as a 3.5mm jack input for plugging an external microphone. A lavalier is included in the kit. Moreover, the TX is equipped with a 150Hz Low Cut Filter option.

The RX can be connected to a camera or a smartphone via a 3.5mm jack output. Furthermore, a 3.5mm jack headphone output allows for audio monitoring directly via the receiver, in case your camera doesn’t have a headphone jack. A pretty useful feature!

The built-in 500mAh lithium battery should provide almost 8 hours of working time when fully charged. Charging must be very fast: in fact, the battery should reach 80% of its capacity in just one hour.

While the G2-A1 only records in mono, the G2-A2 offers both mono and stereo recording options.

When used in mono mode, the signals coming from the two transmitters are baked in the same audio channel. On the other hand, stereo recording mode allows for more precise level control later in post-production, since the two signals are recorded in two independent audio channels.

What’s in the box

Now while we haven’t reviewed it and can’t make any comments about transmission range or quality, if the specs can be trusted, the Synco G2 seems ideal for journalists, bloggers, YouTubers and content creators looking to improve their audio setup. Both the Synco G2-A1 and G2-A2 are already available for purchase at B&H. They are priced respectively at $129 and $199.

Have you ever tried any audio product from Synco? Are you going to try out the new Synco G2? Let us know in the comments below!

Flashback: Sony Ericsson Satio and a look at how far camera phones have come in the last decade