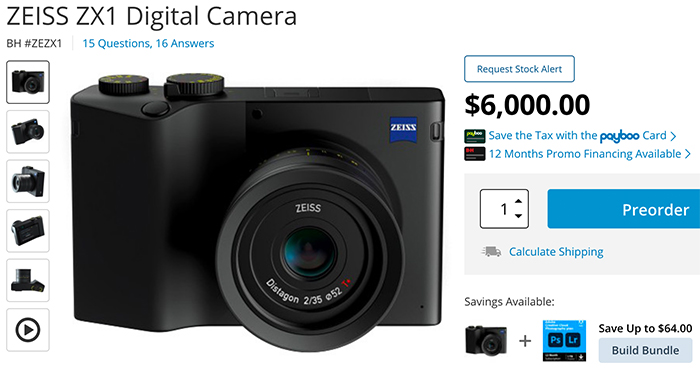 Zeiss ZX1 camera at BHphoto, Adorama and Fotokoch. There are also a ton of ZX1 accessories (listed at BH).

Photographyblog reviewed the Zeiss ZX1. This is basically a Zeiss designed camera built by Sony and could be considered as a sort of RX1 successor.

Zeiss have clearly thought out-of-the proverbial box when it comes to the design of the ZX1, and in large part they’ve succeeded in creating a camera that’s both genuinely different to the norm and genuinely better.
From the uniquely curved handgrip to the excellent EVF and massive LCD screen, to the incredible build quality and intuitive touchscreen interface, it’s clear that Zeiss have lavished a lot of attention and love on the ZX1.
Whilst the lack of external controls and greater reliance on the touchscreen will be off-putting for some, being able to shoot, store, edit and share photos from a single device is a pretty heady mix.
With a price-tag of £5400 / $6000, not too many photographers will actually get to experience the ZX1 for themselves, which is a real shame given that it at least offers an insight into what a modern camera can be.
Sure, you could buy a decent mirrorless camera, smartphone and laptop/tablet for the asking price of the ZX1, but that’s rather missing the point of the all-in-one approach that Zeiss have taken.
Overall, the Zeiss ZX1 is a high-end, very niche photography device that certainly isn’t going to save the camera industry or even sell in large numbers – but for a few lucky people, it could just be the camera that they’ve been waiting for…

Phones are too big, and Apple could have fixed this