Home » Blog » Under-screen camera technology, which will be the best? Xiaomi, Samsung or ZTE?
Mobile

Under-screen camera technology, which will be the best? Xiaomi, Samsung or ZTE? 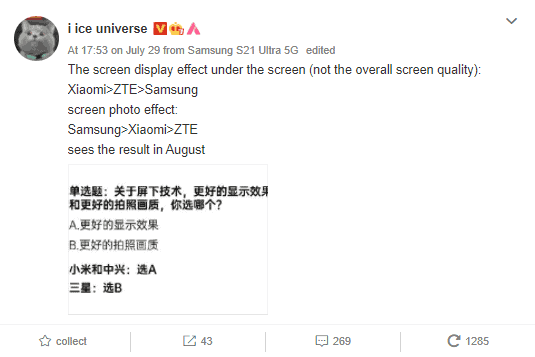 ZTE Vs Xiaomi Vs Samsung – which will be the best?

We can see that whether it’s in terms of screen effect or image output effect, ZTE is not tops. Regarding this report, ZTE’s executive, Lu Qianhao, had a lot to say. According to him, there is no need to worry. After the smartphones hit the public domain, he calls on “friends” to buy these devices for comparison.

Interestingly, all these products will officially arrive in August. The Xiaomi Mi MIX 4 will come with a hyperboloid screen as well as the Qualcomm Snapdragon 888 Plus flagship processor. There are reports that both the performance and the image quality will exceed the ZTE Axon 30 lower screen version. Of course, as a high-end flagship, the price of the Mi MIX 4 will be much higher than that of the ZTE Axon 30 under-screen version.

Which of these smartphones do you think will be more attractive? Could it be the ZTE Axon 30, Xiaomi Mi MIX 4, or the Samsung Galaxy Fold3? Let us know your thoughts in the comment section below