Home » Blog » Users will not be able to log in –
Mobile


In December 2010, Google released a new smartphone operating system, Android 2.3. Over the past 11 years, it is interesting to note that some devices still run on this system. However, Google’s services have been withdrawing their support for this system over the years. In February 2017, Android’s payment service, Google Pay, canceled support for Android 2.3. Now, there is an official report that Google will officially abandon the system. 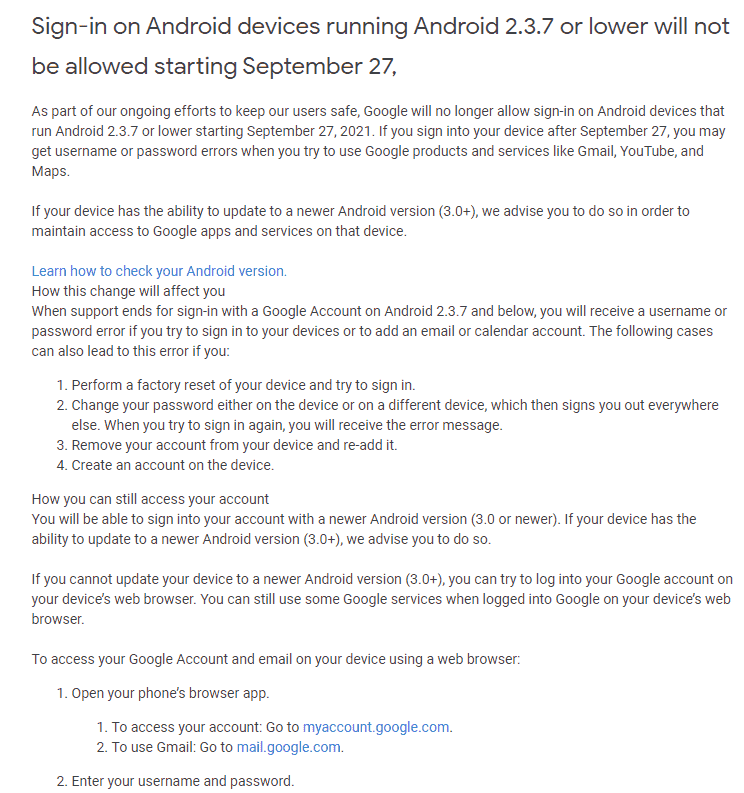 According to an official report from the company, Google accounts will not be able to log in if the Android device is running Android 2.3.7 or lower. Google’s statement reads that from September 27, 2021, Google will no longer allow login on Android devices running Android 2.3.7 or lower. Only devices running on Android version 3.0 or higher will be able to log in.

After September 27, any login attempt may give an error message feedback. This will be the case of the device use Google services such as Gmail, YouTube, and Maps. The error message will show when inputting a username or password.

If the device cannot be updated to Android version 3.0 or above, the user can try to log in to the Google account on the device’s web browser. After successfully logging in, you can still use some Google services.

On December 7, 2010, Google officially released the smartphone operating system, Android 2.3. This system is also known as the Android Gingerbread system.

As the seventh version of Android, Android Gingerbread is also one of the most iconic versions in the history of the platform. This is because it is the first version to fully launch the annual update plan.

Other cases that can cause the error

Unfortunately, many users of this system do not even know that they are using a really old system. If you have a concern, you can check by going to System > Advanced > System Update. If the device is upgradable, then you are in luck. Just upgrade to Android 3.0 and above. This will make it possible to continue to use Google account to log in to Google-related programs. However, if not, your access to Google’s services will be limited to the browser.